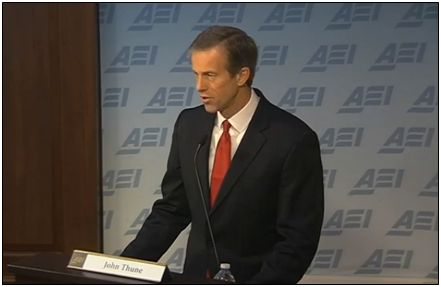 JOHN THUNE MUST TAKE A STAND …

|| By ROBERT ROMANO ||  “Last year the administration (of Barack Obama) announced it wants to give up oversight of Internet Corporation for Assigned Names and Numbers (ICANN) and the Internet Assigned Numbers Authority (IANA) contract.  If this transition is going to happen, it has to be done very carefully. We have to focus on ensuring that the Internet will remain open, stable, and secure.”

That was new Senate Commerce Committee Chairman John Thune (R-S.D.) speaking at the American Enterprise Institute on January 28, all but conceding that the Internet stewardship transition — a function performed by the U.S. Commerce Department since 1998 — to ICANN is a done deal.

The only thing left to decide, apparently, are the details of the transfer, including a need “to urge ICANN to implement accountability reforms as part of the IANA transition process.”

Said Thune, “If these goals cannot be met, the Administration should simply renew the IANA contract indefinitely.”

Certainly, the contract — which has ensured a free and open Internet for almost 17 years — should be renewed. For, once the authority is transferred, creating a global Internet governance monopoly, there will be no legal cause of action against the Commerce Department should any Internet censorship occur.  In a 2005 ruling by the U.S. Ninth Circuit Court of Appeals, McNeil v. Verisign, it was held that no First Amendment claims can be brought against ICANN — because ICANN is not a government actor.

Therefore the only way to truly ensure that Internet governance remains “open, stable, and secure” is for the Department to maintain its oversight via the contract with ICANN and with any successor contractor.

Thune said he intends to hold a hearing in February to discuss the proposed transition with Department of Commerce Assistant Secretary Larry Strickling and ICANN CEO Fadi Chehade.

Yet, a better approach for Congress might be to question why the Commerce Department’s National Telecommunications and Information Administration (NTIA) believes it can legally perform the transfer in the first place.

Particularly since the omnibus appropriations bill for Fiscal Year 2015 — which Thune voted in favor of — contains an explicit provision prohibiting the Department from performing the transition: “None of the funds made available by this Act may be used to relinquish the responsibility of the National Telecommunications and Information Administration during fiscal year 2015 with respect to Internet domain name system functions, including responsibility with respect to the authoritative root zone file and the Internet Assigned Numbers Authority functions.”

In fact, whether NTIA has the legal authority to transition key Internet domain name and Internet Protocol address functions has been the key controversy facing Congress and all advocates of a free and open Internet for almost a year now …