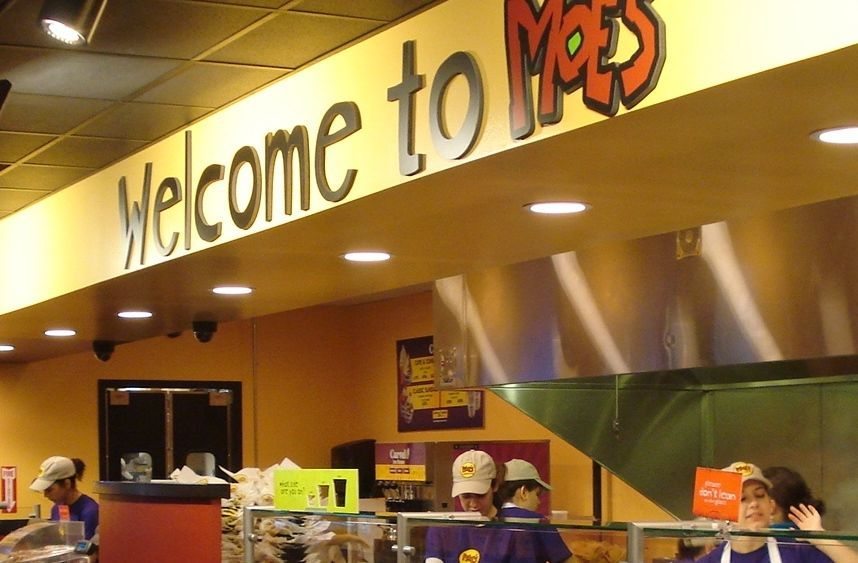 By FITSNews || We love a Moe’s Burrito.   In fact our favorite is the “Joey Bag of Donuts.”  All that meat in our mouths … mmmmm.

In addition to good food Moe’s (generally) has a good atmosphere – including the chain’s famous “Welcome to Moe’s!” greeting, offered cheerily to customers as they peruse the menu.

Apparently not everyone is welcome at Moe’s, though …

At the company’s downtown Charleston, S.C. location this week, multiple individuals were booted from the restaurant “mid-burrito” by staffers working for S.C. Gov. Nikki Haley and New Jersey Gov. Chris Christie – who appeared at the restaurant for a media event.

According to one of the individuals who was escorted from the premises by security, they were booted “on suspicion of being Democrats.”

“The guy giving the order was a younger guy, about thirty, and I could swear that he had no eyebrows,” one of the individuals removed from the restaurant told FITS. “Not a bad looking guy, but no eyebrows.”

According to our sources, Haley and Christie’s advisors received permission from the Moe’s manager on duty to have the four individuals removed.

Not only that, the manager refused to provide the customers with a refund for the burritos they purchased – saying they would have to “leave now” and “come back later with issues.”

We wonder … is Gov. Christie, the scandal-scarred chief executive of the Garden State, really that hard up for food?  Is his addiction to “om-nom-nomming” so intense as to force hard-working South Carolinians from their seats mid-bite?

Didn’t he recently have some gastric bypass surgery aimed at helping him with his “Git in Mah Belly” problem?

Or (more likely) are these “Republicans” fearful of anyone other than easily controllable mainstream media being permitted to record their public statements?

Whatever the case, as much as we enjoy Moe’s we’re taking the restaurant off of our list of frequented dining establishments – and would encourage our readers to do the same.

Obviously we believe Moe’s has the right to refuse service to anyone it chooses on any basis it pleases … but it must then deal with the consequences of its actions in the broader marketplace.  And while we don’t expect our calling attention to this shameless example of pandering to have any sort of seismic impact on the company’s bottom line, in this economy every penny counts …

@fitsnews Thanks for bringing this to our attention. We are currently looking into this matter.

UPDATE III: Well, well, well … the Moe’s in question is ownedhttps://www.fitsnews.com/2014/09/17/nikki-haleys-burrito-gate-comes-full-circle/ by a Haley campaign donor and political appointee.