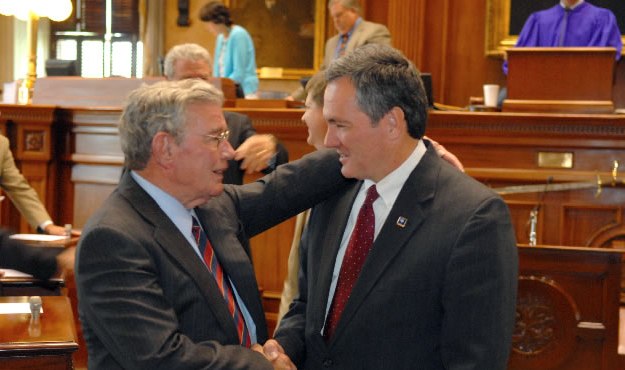 By Will Folks  ||  It should be abundantly clear at this point that there’s no love lost between me and S.C. Speaker of the House Bobby Harrell (RINO-Charleston).

“Me and the Speaker is not peas and carrots,” in other words.

Yet while I loathe Harrell and the self-serving, hypocritical brand of big government, corporate welfare “Republicanism” he advances, I cannot help but view his current plight as a teachable moment for other politicians caught up similar scandals. That’s because Harrell is pretty much rewriting the book on “what not to do” in the event of a public corruption allegation.

None of which is helping his political position …

Let’s recap Harrell’s various maneuverings since reporter Renee Dudley (formerly of The Charleston Post and Courier) broke the first major corruption story involving him: First he lied and refused to release his records. Then he assassinated Dudley’s character  – and strong-armed her newspaper by allegedly threatening to withhold an annual $12 million bribe given by the S.C. General Assembly to the newspaper industry.

More recently Harrell has launched a “blood war” against his political enemies (my website has previously reported on several components of that effort – HERE, HERE, HERE and HERE). He’s also been accused of rigging a S.C. Supreme Court election in an effort to ensure his case gets the outcome he wants from the state’s highest court.

And again … all of that is on top of the broad public corruption allegations he was already facing.

“Whoever is handling his PR should be shot,” one well-connected lobbyist told me. “You can proclaim victory all you want but everyone knows this isn’t over. He looks desperate.”

This lobbyist also confirmed what FITS has heard from state lawmakers about the deleterious impact Harrell’s desperate tactics are having on the chamber he governs.

Sure, all public figures are ultimately responsible for their own PR – but in most cases they receive advice from trusted friends or paid professionals. Or both. That’s not the case in Harrell’s situation, according to sources familiar with the operation.

“Bobby isn’t advised on these matters,” the source said. “There is no kitchen cabinet, there is only what ‘Charleston’ says.”

‘Charleston’ is the term Harrell’s network of young operatives uses to describe the Speaker.

“Children playing games,” he initially offered, although upon a momentary reflection he asked if he could revise his remark.

I know because I’ve made both mistakes myself …

So … what should he do instead?

Far be it from me to advise an individual whom I believe to be guilty as sin, but in Harrell’s case there’s some real wisdom to be gained by those of us who study the craft. Accordingly, here’s what I would do if I were Harrell (perish the thought) …

1) Acknowledge the legitimacy of the inquiry into his various political dealings and pledge his cooperation moving forward.

2) Apologize to the individuals smeared by his political machine – and vow to cease all future attacks.

4) Hire a professional to advise him moving forward.

Those would be the actions of a sensible, mature leader (to say nothing of an innocent one) …  and each suggestion is something Harrell could conceivably do without surrendering a single inch of ground on the substance of the complaint against him.

Will Harrell do any of these things? Of course not …

His first problem? “Full cooperation” could wind up being incredibly incriminating for him. His second problem? Threats and cajoling are likely the only things keeping him in power right now – and pulling the plug on his petty, hate machine could bring the whole house of cards collapsing down around him. As for championing ethics reform (and specifically the end of corrupt legislative self-policing), Harrell would be removing the corrupt “fox guards hen house” system he’s relying on to absolve him of any guilt.

And which got S.C. Gov. Nikki Haley off the hook in her corruption case.

So … yeah. Therein lies the dilemma.

Still, it’s surprising the Speaker hasn’t at least paid lip service to these notions. After all, like most South Carolina politicians Harrell has been saying one thing and doing another his entire career … and pretending to take the high road in response to this case shouldn’t be all that much different than pretending to cut government, right?

Which makes Harrell’s public relations ineptness all the more baffling …

Henry McMaster Has A Bulldog