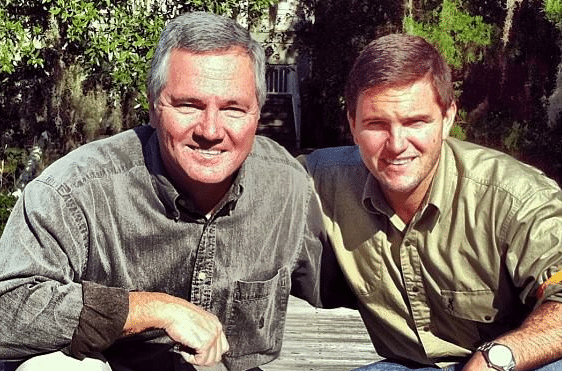 FITS reported exclusively this week on a network of websites allegedly organized by Harrell supporters for the purpose of attacking Wilson – who is currently conducting a public corruption investigation into Harrell’s multiple alleged abuses of power.

Or trying to conduct an investigation …

The younger Harrell – a Columbia, S.C. attorney – has been publicly active in sharing the content of these websites, promoting them via his social media pages.

But sharing content is one thing: According to sources familiar with the operation of the three websites – GOPWrite.com, Between the Chambers and Holy City Politics – Trey Harrell has also been active in creating content for the websites.

“In their system (Trey) Harrell sends the copy to an intermediary (who) then sends it to Chris,” our source explained, referring to Chris Slick – the ex-Harrell aide who is accused of orchestrating the website attacks on Wilson.

So … who is the intermediary?

According to our sources, the younger Harrell sends his content to South Carolina political consultant Thomas R. Higgs II – one of his longtime friends and another Palmetto operative said to be in the employ of the Speaker’s political organization.

“They organize everything and they promote the content,” our source said.

Additional names of contributing authors are reportedly set to be revealed in a forthcoming mainstream media story, although our sources declined to provide those names “out of deference to another media outlet.”

One source who admits to writing articles for GOPWrite.com disputed Harrell’s direct authorship of any anti-Wilson posts.

“I don’t think he writes but I understand he passes information,” the source said. “People pass articles along and Trey disseminates information to a multitude of blogs.”

This pro-Harrell network of websites has sought to impugn Wilson’s integrity at a time when the Speaker’s attorneys are arguing to have the Attorney General removed from the case. And while Wilson has certainly had his fair share of campaign finance issues (many of which have been reported by this website), his irregularities pale in comparison to the widespread corruption of which Speaker Harrell stands accused.

In fact an investigator familiar with the S.C. State Law Enforcement Division (SLED) report on Bobby Harrell tells FITS that funding for some of the political attacks against Wilson could be coming from the same political account that Wilson’s office is investigating.