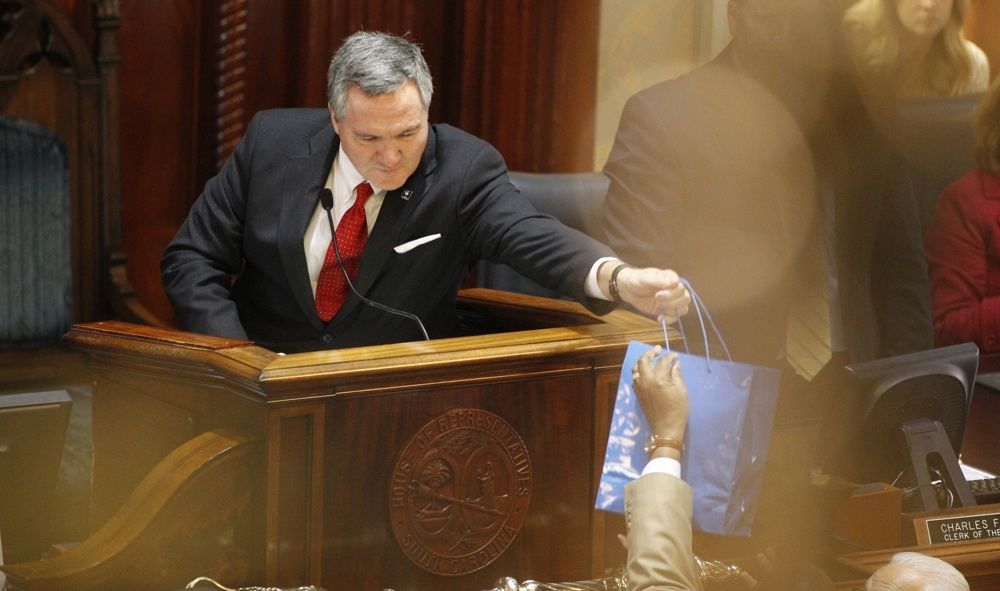 As this website predicted over a month ago, S.C. Circuit Court judge Casey Manning has decided to refer a public corruption case involving powerful S.C. Speaker of the House Bobby Harrell to a so-called “ethics” committee in the S.C. House of Representatives – a chamber controlled by Harrell.

Yeah … how’s that for “accountability?”

According to Manning’s ruling, Harrell’s House has “exclusive authority” over the probe.

“The allegation of the citizen’s complaint giving rise to this investigation were conclusively within the Ethics Code,” Manning wrote. “Despite multiple requests, the Attorney General has failed to offer or present to the Court any evidence or allegations which are criminal in nature.”

Not only that, Manning shut down Wilson’s grand jury – ordering that “neither the grand jury nor any other investigative agency shall take any further action concerning the ethics violation allegations discussed herein until such a time as a final determination is made by the House of Representatives.”

Manning’s decision means state lawmakers have de facto immunity from criminal prosecution when it comes to using their positions of public trust for personal gain – a recipe for disaster in a state already ranked among the most corrupt in America.

It also means South Carolinians should get ready for a whitewash similar to the one S.C. Gov. Nikki Haley benefited from two years ago … unless of course S.C. Attorney General Alan Wilson is able to successfully appeal the ruling (which seems unlikely given Harrell’s unholy alliance with S.C. Chief Justice Jean Toal and the starring role he played in securing her legislative reelection).

Wilson referred Harrell’s corruption case to a statewide grand jury back in January. Last week he told Manning his investigation had uncovered likely criminal activity beyond what has already been alleged in public complaints.

Clearly that did nothing to convince Manning – who in addition to being under the thumb of Toal may have issued his order under threat of blackmail.

Whatever motivated his ruling, Manning’s legacy is now secure as an aider and abettor of corruption – a tool of the shameful, self-serving political establishment that continues to hold this state back and let those in positions of power operate under a different set of rules.

“We believe today’s order of Judge Manning is without any foundation or support in the law,” a statement from his office read. “This Office will vigorously pursue all appellate remedies and will seek to continue this investigation.”

Harrell was busted in 2012 improperly reimbursing himself from his campaign account for dubious flight-related expenses (Harrell is a pilot). How much? More than $325,000. He also stands accused of applying improper pressure on the S.C. Pharmacy Board and the S.C. Department of Labor, Licensing and Regulation (SCLLR) on behalf of his pharmaceutical business – using his official letterhead, no less. Additionally, Harrell’s political action committee is under scrutiny for allegedly misappropriating and misreporting funds – including an effort to force taxpayers to pay hundreds of millions of dollars on an unnecessary transportation project.

And again … those are just the instances of corruption we know about.

As bad as Harrell’s self-serving behavior has been his response to the scandal. First he lied and refused to release his records. Then he assassinated the character of one of the reporters who was investigating him – reportedly strong-armed her newspaper into backing down (by allegedly threatening to withhold an annual bribe the paper receives from the S.C. General Assembly).

More recently Harrell has launched a “blood war” against Wilson (FITS has previously reported on several components of that effort – HERE, HERE, HERE and HERE).

“It’s not over yet,” one Wilson ally told FITS. “This is just a battle. Alan will win the war.”

For the sake of what’s left of the public trust in South Carolina, we sure hope they’re right …