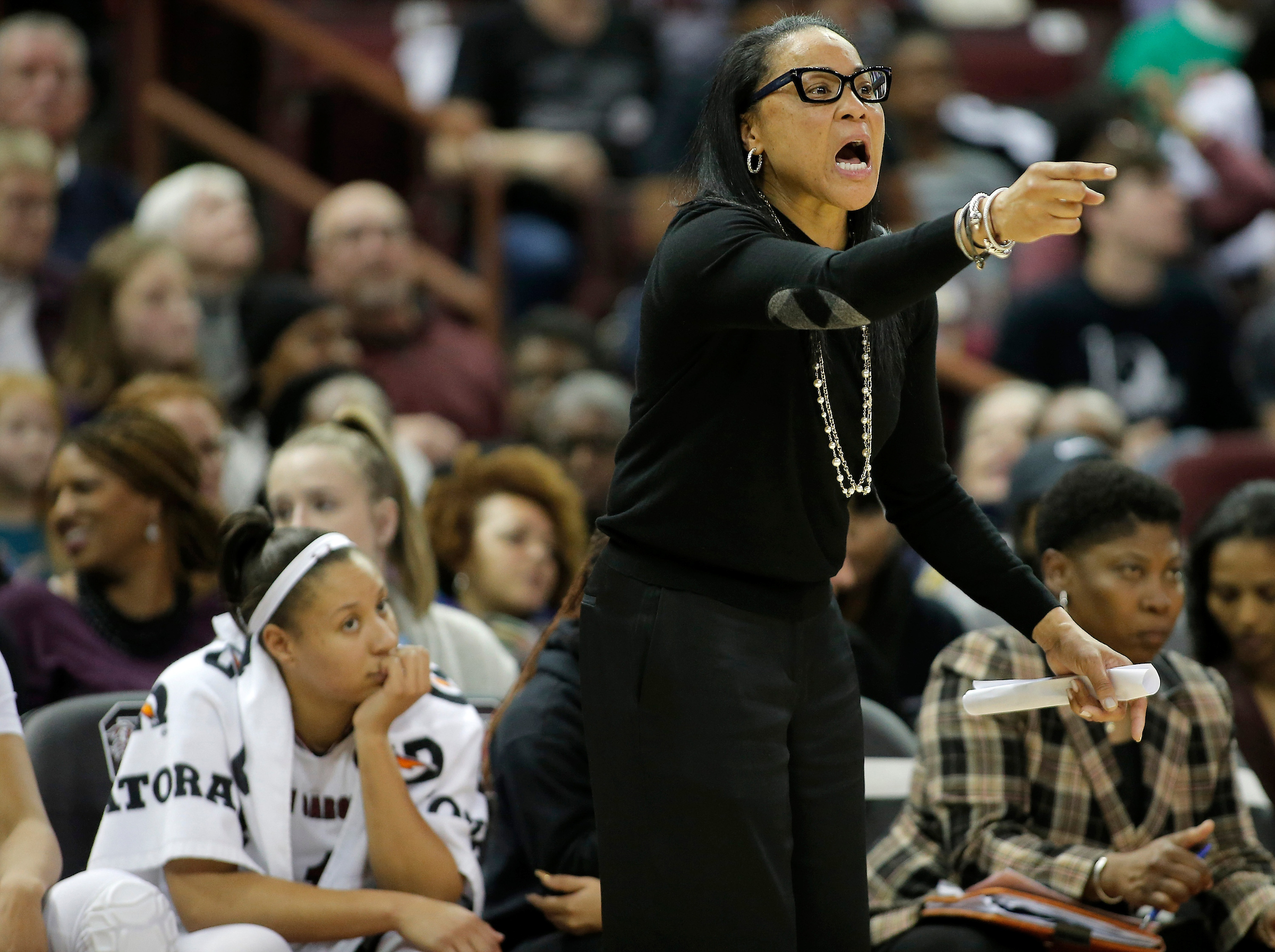 University of South Carolina head women’s basketball coach Dawn Staley is the best in the business. She has brought six Southeastern Conference (SEC) tournament championships, six regular season conference titles and a pair of national championships to Columbia, S.C. – and her team is currently in position to replace UConn as the dominant program in the nation.

In a game portending the passing of the torch, South Carolina downed UConn convincingly back in April to claim its second national championship in five years.

Unfortunately, that victory was marred by the fact Staley and her players refused to take the court for the playing of the national anthem prior to their semi-final victory over Louisville.

Staley told reporters it was all about timing – that appearing for the anthem would have interfered in their pregame routine – but she previously said her team was boycotting the national anthem to “bring awareness to racial injustice in our country.”

In fact, Staley said her team would continue its protest “until we’re able to come to the table with tangible things that change the way that people are treated – people of color, black people, minorities.”

This wasn’t the first time Staley has engaged in doublespeak in pursuit of ‘wokeness.’

Asked whether her team would make the customary visit to the White House following its 2017 title, Staley earned plaudits from this author by answering in the affirmative.

Months later, though, the 51-year-old Philadelphia native flip-flopped – rebuffing an invitation from the administration of former president Donald Trump.

Also, when Staley received a seven-year, $22.4 million contract extension last fall, she blasted both the university and the taxpayers who provided it to her for their “rich history of racism.”

Staley further had the audacity to refer to her $800,000-a-year pay raise (bringing her annual salary to $2.9 million) as somehow being “progressive” – a curious description coming from a multi-millionaire taxpayer-funded employee who works in one of the poorest states in America.


Look, no one is going to argue that racism exists. Or that black Americans have endured some pretty heinous and horrific stuff over the course of this nation’s history. They have. And anyone denying or dismissing that needs a refresher in history. In fact, while I condemned the deadly violence that followed from the killing of George Floyd in Minneapolis, Minnesota in 2020 – I also made clear the rage fueling that violence was not without justification.

No one should argue Staley and her team don’t have a right to protest injustice as they see fit.

Still, their speech is subject to the marketplace of ideas. And this emerging theory that “two wrongs make a right” when it comes to race relations in this country is based on some pretty precarious logic, in my humble estimation.

This week, Staley stepped in it again as part of her ongoing efforts to lead the woke mob in its virtue signaling and mass cancellation efforts. Last week, Staley canceled (literally) South Carolina’s scheduled 2022 and 2023 games with Brigham Young University (BYU) after “a BYU fan directed racial slurs at a Black Duke volleyball player during a game.”

The affirmative statement of what allegedly happened at BYU was taken directly from a report published by Emily Adams for The Greenville News – an article which was subsequently picked up by its parent publication, USA Today.

“The incident at BYU has led me to reevaluate our home-and-home, and I don’t feel that this is the right time for us to engage in this series,” Staley (above) said in a statement issued with the support of South Carolina athletics director Ray Tanner.

By the time Adams published her “article” affirmatively branding BYU fans as racist, serious questions were already being raised about the allegations.

To recap: Rachel Richardson, a 19-year-old sophomore volleyball player at Duke University, claimed a non-student sitting in the Cougars’ student section called her the N-word every time she served during a 3-1 BYU victory on Friday, August 26, 2022 at Smith Fieldhouse in Provo, Utah.

This individual was further alleged to have told Richardson she should “watch her back going to the team bus.”

“I was targeted and racially heckled throughout the entirety of the match,” Richardson alleged. “The slurs and comments grew into threats … both officials and BYU coaching staff were made aware of the incident during the game, but failed to take the necessary steps … they also failed to adequately address the situation after the game.”

Not surprisingly, these allegations sparked a firestorm of recrimination …

… which would have been justified if Richardson’s allegation was true.

The only problem? The alleged racism doesn’t appear to have actually happened.

BYU police investigated the claims and found nothing to support Richardson’s allegations.

“We did not observe that behavior from him,” BYU Police Lt. George Besendorfer told reporters with The Salt Lake Tribune. “We have been unable to find any evidence of that person using slurs in the match.”

Similarly, a report by the BYU student newspaper found nothing to “corroborate Richardson’s claim of racial slurs being yelled at her.”

Worth considering? All of this information was published – and amplified nationally – three days before Adams filed her report for The Greenville News referring to the alleged racial slur as a matter of indisputable, historical fact.

On Friday, BYU issued a statement announcing it had reviewed “all available video and audio recordings, including security footage and raw footage from all camera angles taken by BYUtv of the match, with broadcasting audio removed (to ensure that the noise from the stands could be heard more clearly).”

During the course of its investigation, BYU also “reached out to more than 50 individuals who attended the event: Duke athletic department personnel and student-athletes, BYU athletic department personnel and student-athletes, event security and management and fans who were in the arena that evening, including many of the fans in the on-court student section.”

“From our extensive review, we have not found any evidence to corroborate the allegation that fans engaged in racial heckling or uttered racial slurs at the event,” the school concluded.


Despite these findings, the woke mob doubled down on its cancellation campaign against the school.

“I continue to stand by my position,” Staley said in a statement issued by South Carolina’s athletics department. “After my personal research, I made a decision for the well-being of my team.”

Is that all we need these days to call people racist without evidence?

Sheesh. Staley may “identify” as an arbiter of fact, but in this instance there are no facts supporting her contention.

“The eighteen members of the Duke University volleyball team are exceptionally strong women who represent themselves, their families, and Duke University with the utmost integrity,” King said. “We unequivocally stand with and champion them, especially when their character is called into question.  Duke Athletics believes in respect, equality and inclusiveness, and we do not tolerate hate and bias.”

Duke shouldn’t tolerate hate and bias. No one should.

But before we brand an entire university as racist and start (literally) canceling opportunities for its student-athletes, shouldn’t we at the very least determine whether the alleged hate and bias actually occurred? As opposed to just being the figment of someone’s imagination?

Racism is real. And real racism must be rooted out and exposed for what it is. But those who fight for universal justice do an injustice to everyone when they rush to judgment on the basis of false claims.

Meanwhile, the failure of those who fall for these falsehood to hold themselves accountable when the truth is revealed represents a growing cancer on the public discourse.