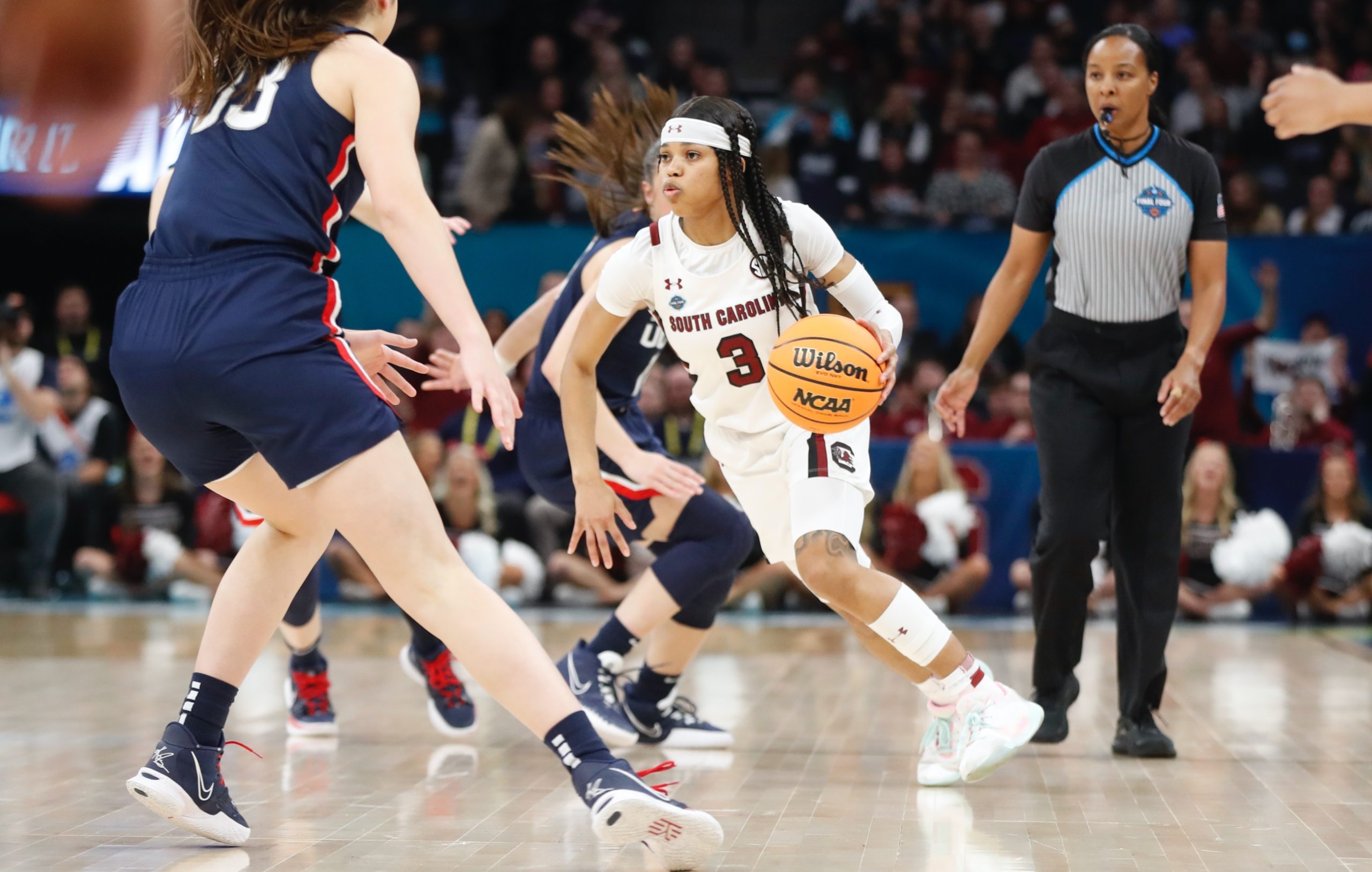 The University of South Carolina women’s basketball team claimed its second national championship in six years on Sunday evening – and that’s not including the de facto championship the program won in 2020 when the NCAA pulled the plug on its postseason due to the coronavirus pandemic.

Senior guard Destanni Henderson scored a career-high 26 points to lead the Gamecocks to a 64-49 victory over UConn – a program which has set the bar in the sport with ten national titles since 2000. The Ft. Myers, Florida native added four assists and three steals to her score sheet – helping the Gamecocks become the twelfth team in NCAA history to go “wire-to-wire” and win a national championship.

South Carolina players and coaches also soothed some ruffled feathers when they stood for the playing of the national anthem prior to the championship game.

As I reported over the weekend, this was a bone of contention heading into the title game after Staley and her players refused to take the court for the playing of the national anthem prior to their semi-final victory over Louisville on Friday night.

Why did the Gamecocks not stand for the anthem in the semi-final round (and in numerous previous contests over the past three seasons)?

According to Staley, it was all about timing …

I’m sorry, but that is totally inconsistent with what Staley and her players have been saying for the past two-and-a-half years.

Staley has previously said her team was boycotting the national anthem to “bring awareness to racial injustice in our country.”  In fact, it was for this reason the Gamecocks didn’t participate in the anthem at home games all season – with Staley saying “if opposing teams choose to play the anthem during the time we’re in the locker room, then we choose to stay in the locker room.”

Staley went on to say the protest would continue “until we’re able to come to the table with tangible things that change the way that people are treated – people of color, black people, minorities.”

Now that Staley and her players were called out on the national stage, though … we are supposed to believe it is all about timing?

Staley wasn’t finished, though … accusing those who criticized her and her players of being racist.

“I can take the heat, but when you write something and it’s during one of the most important times of our season, let it be factual,” she continued. “Let it be factual. And then the other articles come out from that, and then we’re called unpatriotic, we’re called – some of the nastiness, and it’s because we’re a predominantly black team.”

I cannot speak for anyone else, but my criticism of this program has nothing to do with anyone’s skin color … it’s because the coach of the team (for all her accomplishments) is a woke hypocrite.

Let’s rewind the tape to the last time South Carolina won a national championship, for example. Asked whether her team would make the customary visit to the White House, Staley earned plaudits by answering in the affirmative.

Months later, though, the 51-year-old Philadelphia native flip-flopped – rebuffing an invitation from the administration of former president Donald Trump.

Fast-forward to last fall, when Staley received a seven-year, $22.4 million contract extension from South Carolina. Immediately after inking the deal, Staley blasted both the university and the state for their “rich history of racism.”

Staley also had the temerity to refer to her $800,000-a-year pay raise as somehow being “progressive” – a curious description coming from a multi-millionaire taxpayer-funded employee who works in one of the poorest states in America.

Oh, and when it comes to the “social justice” Staley and her players are (were?) protesting, as I have frequently noted the pendulum is actually swinging in the other direction in her adopted home state of South Carolina. Hard. In fact, it has reached a point where real justice is being materially eroded.

As I noted in my coverage over the weekend, no one is going to say racism doesn’t still exist in this country. Nor will I ever argue that its consequences aren’t real – and wrong. Similarly, we must never tolerate discrimination in any form or fashion in the administration of a government that has vowed to provide “equal justice under the law” to all of its citizens.

But somewhere along the way, our definitions of what constitutes fairness and equality have gotten distorted. And these distorted definitions are being used to deliberately divide people. And our tax dollars are literally mainlining this division into the minds of our children.

Oh, and the woke crowd is just getting started …

Staley’s accomplishments – as a player and a coach – are amazing. Approaching legendary status, in fact. And as I have always maintained, she and her players are entitled to freedom of expression. If they want to protest, they should protest. Only the marketplace of ideas will judge them.

But please … do not call other people racist just because you got called out and backed down.

Stand for what you believe in. Or don’t stand. Just be consistent. Oh, and don’t blame others when your hypocrisy and inconsistency detract from the achievements we should all be celebrating today.

BANNER VIA: University of South Carolina

Dawn Staley Is At It Again …