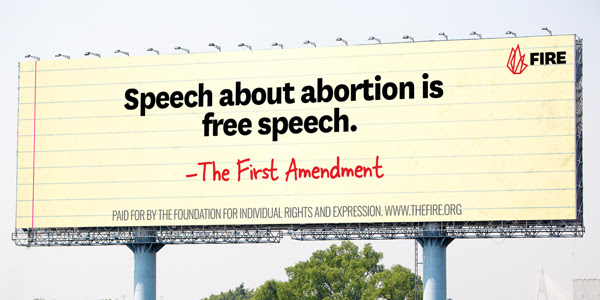 A month after my news outlet exclusively reported on some dangerous anti-First Amendment language contained in one of South Carolina’s proposed abortion bills, a free speech advocacy group has launched a billboard campaign related to the issue.

As I noted last month, S. 1373 – sponsored by state senators Richard Cash, Rex Rice and Danny Verdin – has the potential to “criminalize broad swaths of free speech while at the same time gagging media outlets from reporting on this issue altogether.”

Whatever your views on abortion, that’s just wrong.

The Foundation for Individual Rights and Expression (FIRE) – a nonprofit which exists to “defend and sustain the individual rights of all Americans to free speech and free thought” – agrees.

In response to the bill, the organization has “kicked off a six-figure billboard campaign in South Carolina calling attention to legislative proposals that would criminalize discussion about abortion online – even across state lines,” according to a news release from the group.


“These proposals are a chilling attempt to stifle free speech in South Carolina,” FIRE legal director Will Creeley said in the press release. “Whether you agree with abortion or not is irrelevant. You have the right to talk about it.”

In a column published on the Reason website last month, UCLA law professor Eugene Volokh argued that hypothetical news stories published in South Carolina about an abortion clinic in neighboring North Carolina could conceivably meet “the elements of the crime” under the proposed legislation.

In other words, in the course of reporting on the issue of abortion a Palmetto State-based media outlet might provide readers with “information about a clinic that could conveniently perform abortions for South Carolina women” – information which drew “patients to that particular clinic.”

Per Volokh’s interpretation of the proposed statute, the media outlet which published this hypothetical story could be prosecuted under the law – even if it painted (or attempted to paint) the clinic in a neutral (or even a negative) light.

“That seems pretty clearly unconstitutional to me,” he concluded.

To be clear: I am passionately pro-life. I believe life begins at conception, and I oppose abortion on demand – especially late-term abortions. I further believe life to be the indispensable liberty – and that if we as a society cannot protect it, then the other liberties don’t matter all that much.

Having said that, my job is to host a conversation within the marketplace of ideas on this issue – which is why my microphone is always open to those in the pro-choice movement who wish to share their views with my audience.

Indeed, it is respect for that conversation – and the right of those with divergent views to continue conducting it – which leads me to vehemently oppose the anti-free speech provisions contained in the Cash-Rice-Verdin bill.

Sadly, squelching speech is nothing new in South Carolina. State lawmakers have gone down several slippery slopes recently as it relates to First Amendment issues. They criminalized speech in a recent election reform bill – as well as via a pro-Israeli proviso which was inserted in the 2018 state budget.

Now they are moving to block people from being able to talk about – or report on – the issue of abortion?

In “Republican-controlled” South Carolina, “conservative ideologues are displaying a disturbing bent toward suppressing freedom of expression as they try to run up the score on these hot button issues,” I noted recently.

Such moves are – and will always be – prima facie unconstitutional, whatever you believe about the underlying issues.

And while that battle heats up, don’t forget the state’s current abortion law – the ‘heartbeat bill’ – could soon have a looming date with the state supreme court.

Letter: In Support Of Prioleau Alexander

Sex Sells (And Gets Your Power Turned Back On)