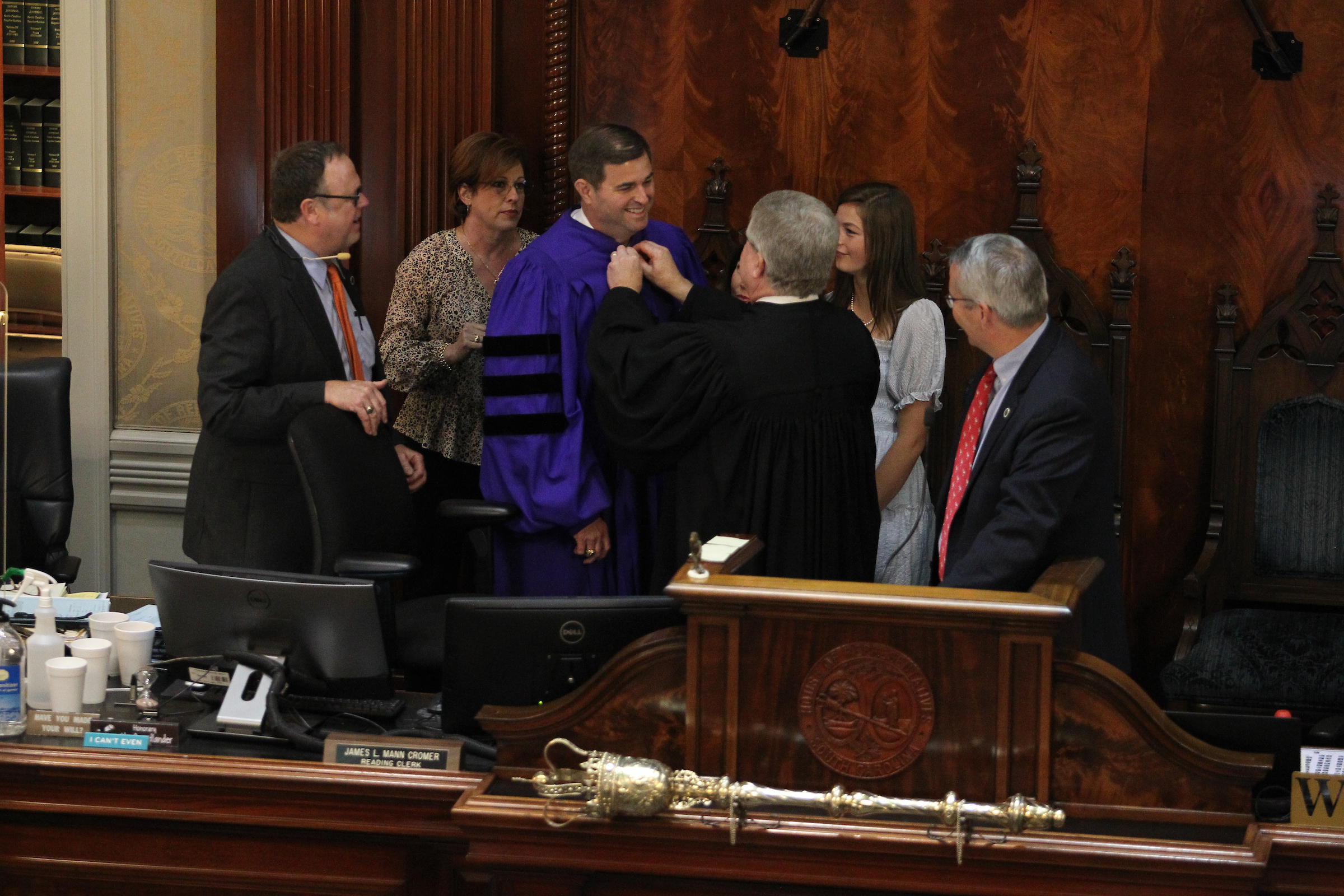 Last year, powerful South Carolina ways and means chairman Murrell Smith cast a pair of votes in support of Act 1 of 2021 – a.k.a. the “heartbeat bill” – which banned the vast majority of abortions in the Palmetto State once an unborn child’s heartbeat is detected.

Smith – who was elected speaker of the House of Representatives last week – has been a staunch supporter of the pro-life movement during his time in elected office.

The Palmetto State’s “heartbeat bill” – which was blocked by a federal judge the day after it was signed – is one of many pieces of state legislation impacted by Monday’s bombshell revelation that the U.S. supreme court is likely to overturn the landmark 1973 Roe v. Wade ruling, which effectively legalized abortion on demand in the United States.

With abortion rights squarely on the front-burner again, supporters of the newly elected speaker of the House are working feverishly to suppress news of Smith’s involvement in a 2015 case involving a Sumter County woman who claims to have been subjected to a botched abortion.

One to which she claimed she did not consent …

Pro-life advocates have termed Smith’s involvement in this case as Planned Parenthood’s attorney “perplexing” – and have sought “clarification” from the powerful lawyer-legislator as to his role.


The case – Kimberly Burgess v. Planned Parenthood – was filed in March of 2015. It was settled during mediation on November 22, 2016. Details of that settlement were not disclosed.

Graphic details from the pleading, however, are being circulated among members of the S.C. General Assembly in the aftermath of the supreme court’s deliberations in Dobbs v. Jackson Women’s Health Organization – the case which could overturn Roe.

According to the pleading, Kimberly Burgess went to Planned Parenthood’s Sumter, S.C. clinic on the morning of February 3, 2012. Upon entering the facility, she completed a “registration form” and paperwork was subsequently “executed which included requests for surgery or special procedure.”

An ultrasound was then conducted after which “mild sedation” was administered to Burgess, and with no “contraindications” noted, Dr. Harvey N. Brown of Columbia, S.C. “proceeded to a suction abortion” at approximately 12:18 p.m. EST.

“The surgical record reflects the uterus was evacuated,” the pleading noted. “There was an estimated blood loss of 50-100 milliliters and tissue examination revealed villi, sac, fetal parts and reflects that all fetal parts were examined consistent with 12 weeks gestation.”

Six days later, though, Burgess began experiencing bleeding, clotting and cramps, according to the pleading. She was admitted to the emergency room at Prisma Health Tuomey Hospital after experiencing “heavy vaginal bleeding and passage of (her) fetus.”

Wait … what? Didn’t she already have the abortion?

From the pleading, here is the graphic record of what allegedly happened to Burgess on her visit to the emergency room …

According to Burgess’ pleading, “at no time did Dr. Brown or any other doctor discuss the procedure with her.”

At this point, Burgess claimed to have “expressly told Dr. Brown she did not want to go through with the procedure and for it to be stopped.”

At this point, Brown allegedly “slapped her on the thigh three times very hard and said, ‘shut up before you run off my clients,’” according to the filing.

Brown then allegedly “stuck some type of vacuum device inside her and then started the procedure.”

According to a response to Burgess’ lawsuit filed by Smith’s firm on May 21, 2015, Planned Parenthood and Brown were “without sufficient information or belief to admit or deny” the allegation that Brown aborted Burgess’ fetus without consent “and therefore denies the same and demands strict proof.”

The case was quiet for several months as Smith – who is immune from appearing in court while the state legislature is in session – failed to respond to the first set of interrogatories in the case (and Burgess’ initial request for the production of documents).

On September 9, 2015, Burgess’ attorney – Charles J. Hodge of Spartanburg, S.C. – filed a motion with the S.C. fifth circuit seeking an order which would compel Smith to cooperate with his discovery requests.

In addition to his leadership post in the House, readers will recall Smith is also chairman of the über-influential S.C. Judicial Merit Selection Commission (SCJMSC) – a panel responsible for determining which judges are allowed to stand for election before the state legislature.

This notoriously self-serving process is facing fresh scrutiny in light of numerous travesties of justice which have occurred recently in the Palmetto State involving powerful lawyer-legislators who appoint judges and then receive preferential treatment from them when they appear before them in court.

Last fall, in fact, I criticized Smith in connection with this very process …


To be clear: I am neither criticizing Smith for taking this case nor am I accusing him of any alleged hypocrisy associated with his decision to do so. I believe every defendant is entitled to the best representation they can afford, so I rarely criticize attorneys when they take on cases like this (although I certainly reserve the right to criticize how they conduct themselves in the process).

Similarly, I have received no information which would suggest Smith abused his unrivaled influence over the judiciary in connection with the handling or disposition of this case.

Also, as noted above, this case “fully settled” on November 22, 2016 after a seven-and-a-half hour mediation process. The terms of that settlement have not been disclosed.

Still, the political optics for the incoming speaker are atrocious … and could potentially cripple him with South Carolina social conservatives.

This news outlet has reached out to Smith for comment – and has offered him access to our microphone to address any criticism he has received in connection with this case.

“My heart is distraught by the violent and gruesome loss of an innocent precious human life and the resulting dangerous harm and injury done to a mother by this careless and lethal procedure,” Kirsop (above) told me. “It could not be clearer from this case that Planned Parenthood and the abortion industry have no care or concern for the lives or health of women.”

According to Kirsop, “it is perplexing to find the name of our newly elected Speaker of the House among the legal representation for such a murderous organization, however considering how defense firms contract with insurance companies, there may be reason for alleviating concerns.”

Kirsop added that she hoped Smith would “take the opportunity to address and clarify this, out of urgent necessity.”

“I believe that his very pro-life voting record and his recent leadership in directing millions of dollars in funds to pro-life pregnancy centers, reflect his heart and conscience,” she said. “Being pro-life is a matter of faith and conscience before it is ever political — and the journey to becoming pro-life is often one of redemption. It is paramount that every member of our legislative chambers weighs this issue in their hearts before they ever leverage it for political or career advantage. Precious lives are at stake.”

Messages to the Columbia, S.C. office of Planned Parenthood were not immediately returned …

As noted earlier this week, I have made my personal views on the abortion issue abundantly clear over the years (I believe life is the “indispensable liberty” – and that it begins at conception). Still, this news outlet is home to differing views on this subject. These views are not only welcomed, but it is my intention for FITSNews to continue serving as a place where anyone with an intelligent take on any issue can come to share their perspectives within the marketplace of ideas.