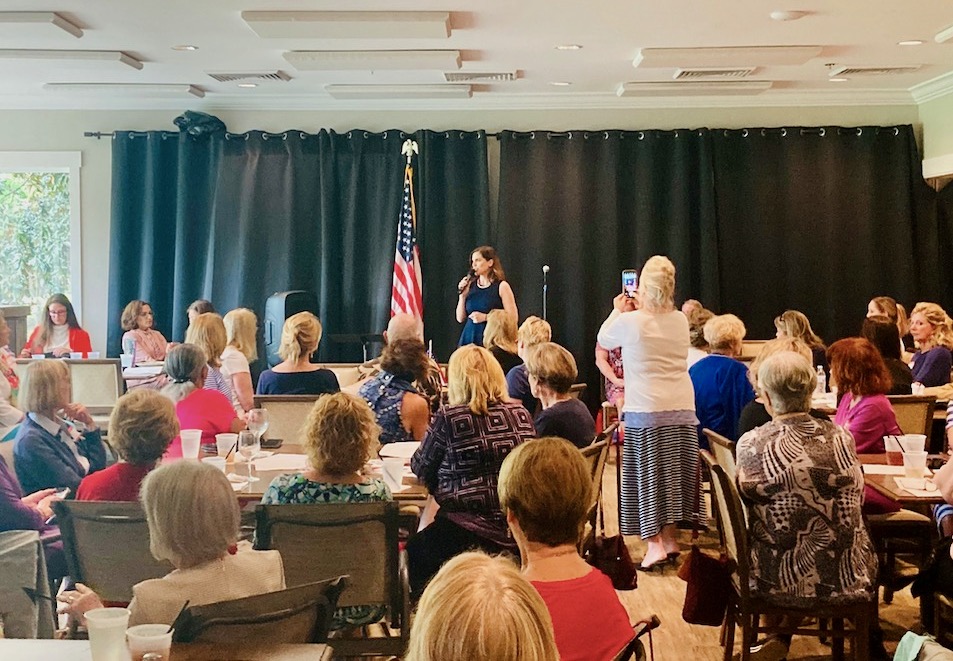 Incumbent congresswoman Nancy Mace has heckled during an appearance before a group of Republican women in Beaufort County, South Carolina this week. As cell phone cameras rolled, the 44-year-old first district representative was booed and jeered as she attempted to explain her prior criticisms of former U.S. president Donald Trump.

As regular readers of this news outlet will recall, Mace – along with former U.S. ambassador Nikki Haley – was among Trump’s most vocal critics in the aftermath of the January 6, 2021 rioting at the U.S. Capitol.

She quickly walked that criticism back, but Trump did not forgive her …

Nor did a majority of attendees at a Republican Women of Southern Beaufort County event held on Monday at Oak Terrace at Rose Hill, a restaurant in Bluffton, S.C.

Pressed to defend her criticism of Trump in front of this gathering, Mace pivoted to the fear she experienced during the rioting – urging the women to see her perspective.

”I don’t expect you all – all of you – to agree with me on my comments,” Mace said. ”But I was there that day – and I at least want you to understand my perspective as a single mom. I was stuck in a tunnel at one point because we were evacuated from our office.”

According to Mace, she was in the tunnel with several members of congress including representative Dan Crenshaw of Texas – a former Navy Seal.


”This is really unsafe – this is dangerous,” Crenshaw told Mace, according to her version of events.

Mace added that a police report published ten days after the rioting suggested she and her colleagues were targets of the mob.

“It was my daughter and my son who were calling me that day, (saying) ‘Mommy, am I ever going to see you again? Are you alive? Are you okay?,’” Mace said. “They’re teenagers, they’re on social media – they saw the videos, they saw the violence.”

“I have kids that I have to come back home to,” Mace continued. “I now carry a gun with me – a SigSauer P365 9 millimeter – everywhere I go because I get threats from the far left all over the place. And so I don’t expect you to have to agree with me but at least understand my perspective.”

The women in attendance at this particular event did not understand Mace’s perspective … at all.

In fact, several of them demanded Mace “answer the question” she was asked.

As attendees grew frustrated with Mace, Terry Wigglesworth – the president of the group – came to the congresswoman’s defense.

“She has thirty minutes,” Wigglesworth said. “It’s her time to use it any way she wants to.”

As the boos began to rain down on Mace, Wigglesworth took a microphone and chided

“Now listen, you are Republican ladies,” she said. “I want you all – out of respect … please be quiet and listen. After this is over you can walk up to her in person and talk to her.”

Here is the exchange …

Mace is being challenged for the first district seat by former state representative Katie Arrington.

As I have previously noted, the race between Mace and Arrington has become a proxy war between the 45th president and his #NeverTrump rivals in the “Republican” establishment – including Haley (who has endorsed Mace and raised big bucks for her candidacy).

The same can be said of the race for the seventh congressional district between incumbent Tom Rice – one of the ten GOP lawmakers who voted to impeach Trump – and a host of candidates including Trump-backed S.C. majority whip Russell Fry.

Many view these races as barometers for how Trump might perform in the 2024 “First in the South” GOP presidential primary – a race which was cancelled in 2020 by party leaders loyal to the former president.

Trump (above) pilloried both Mace and Rice during a speech last month in Florence, S.C., calling them “grandstanding losers.”

“Unfortunately for the patriots of South Carolina you currently have two atrocious RINOs – they’re bad people – in the House, who went to Washington, sold you out and partnered with the Democrats to stab the Republican party – and frankly to stab our country – in the back,” Trump said.

Mace backers who attended the event disputed the characterization of her being heckled, saying the incumbent merely received a “smattering” of boos in response to one question in what was otherwise a positively received appearance.

Mace also posted a message to her social media pages, saying she “enjoyed talking with voters today about keeping our seat in Republican hands!”

“BIG thank you to the Republican Women of Southern Beaufort for hosting us today!” she added.