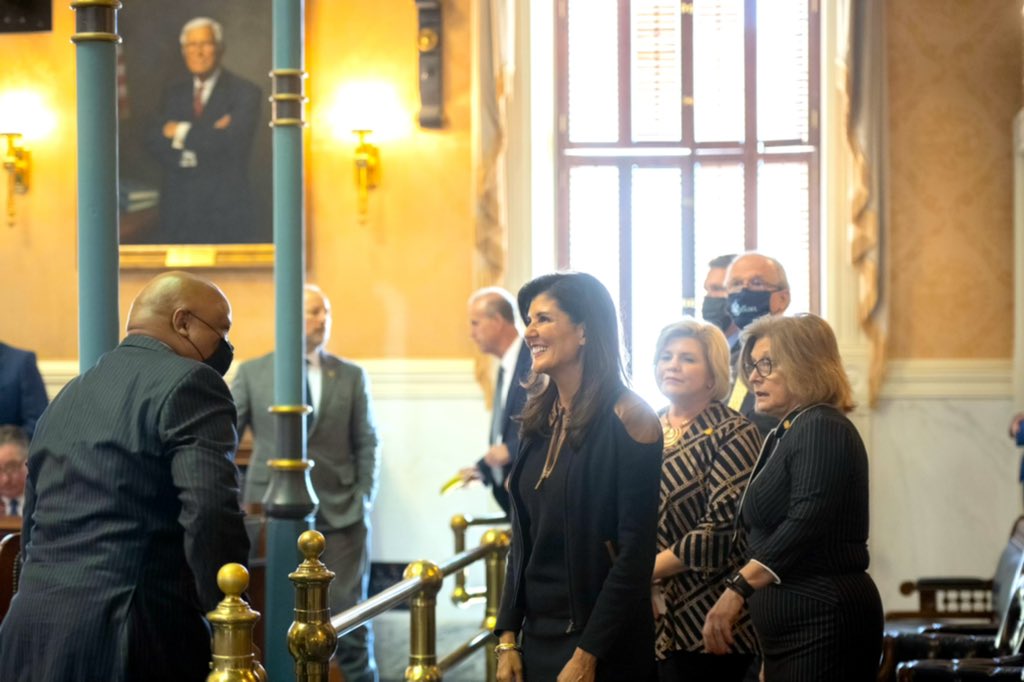 Former South Carolina governor Nikki Haley paid a visit to her old stomping grounds at the S.C. State House earlier this month – rubbing elbows with her former colleagues in the state legislature and posing for pictures with legislative leaders.

The former ambassador to the United Nations – who maintains a residence on Kiawah Island – has been focusing more intently on her home state in recent weeks as she positions herself ahead of the 2024 election cycle.

Haley’s biggest gambit so far? Her endorsement of a former rival – U.S. congresswoman Nancy Mace – in her bid for a second term representing the Palmetto State’s first congressional district (which includes Charleston, Beaufort and other coastal Lowcountry population centers).

Haley’s endorsement of Mace kicked off a proxy war with former U.S. president Donald Trump – who has made Mace one of his top targets for defeat in 2022.

Just last week, Trump announced he was endorsing former state representative Katie Arrington – one of Mace’s fiercest rivals – in her campaign against the incumbent.

As I noted in a recent “Week in Review” segment, this proxy war could go a long way in determining the next president of the United States – or at the very least the next GOP nominee.

As for Haley, she is now “standing in the way of Trump’s efforts to reshape the U.S. Congress … hoping to turn this congressional race into a referendum on their competing visions for the future of the party,” I noted.


Trump’s frenemy has contorted herself into a million different positions vis-à-vis the former president – but the basic math on their relationship is simple: If an opening presents itself for Haley to run for president, she is going to take it. No matter what Trump does.

To Haley, referencing Trump in a positive light (for now) is simply the cost of doing business within the GOP electorate …

While Haley and Trump are pitted against each other in South Carolina’s first congressional district, the situation just up the coast in the Palmetto State is less clear. In the South Carolina seventh congressional district – which includes the population centers of Myrtle Beach, Florence and Georgetown – Trump has already come out and endorsed state representative Russell Fry in his bid against incumbent Tom Rice.

Longtime readers of this news outlet will recall Rice was propelled to a GOP runoff victory in 2012 over former S.C. lieutenant governor André Bauer on the strength of a pivotal endorsement from Haley.

Has Rice done that? No. One of the more fiscally liberal “Republicans” in Washington, D.C., Rice has been a vote for the status quo from day one. Still, it wasn’t until he shocked the nation by voting to impeach Trump last January that most GOP voters sat up and took notice.

Rice has doubled down on his impeachment vote, by the way. And his wife – commercial realtor Wrenzie Rice – fanned the flames by referring to Trump’s supporters as a “cult” and likening the ex-president to Adolf Hitler.

Given the starring role she played in elevating Rice to Congress a decade ago – and the blowback she received following his impeachment vote – Haley finds herself in a very interesting position when it comes to the seventh district. Does she support Rice and go “all in” when it comes to her Palmetto proxy war against Trump? Or does she join Trump in backing one of the challengers to the incumbent?

The politically advantageous play, from my perspective, would be for Haley to go against Rice. Given how popular Trump remains with GOP voters in the Palmetto State, were she to endorse the incumbent (again) it would put her in a potentially untenable position in a critical early primary state. Furthermore, it would make these two races all about her war against Trump heading into 2024. Coming out against Rice, on the other hand, would throw a bone to the MAGA movement – and position Haley very well to deflect the narrative that she is reverting to her #NeverTrump roots.

Of course, there is a problem with that calculus …


How can Haley oppose Rice over impeachment when no Republican in the country was as vocal as her in excoriating the former president for allegedly inciting the January 6, 2021 riots at the U.S. Capitol?

Haley already has significant issues with hypocrisy … does she really want to risk another high profile 180-degree turn? Ultimately, the former ambassador has but one option in this race: To stay out of it.