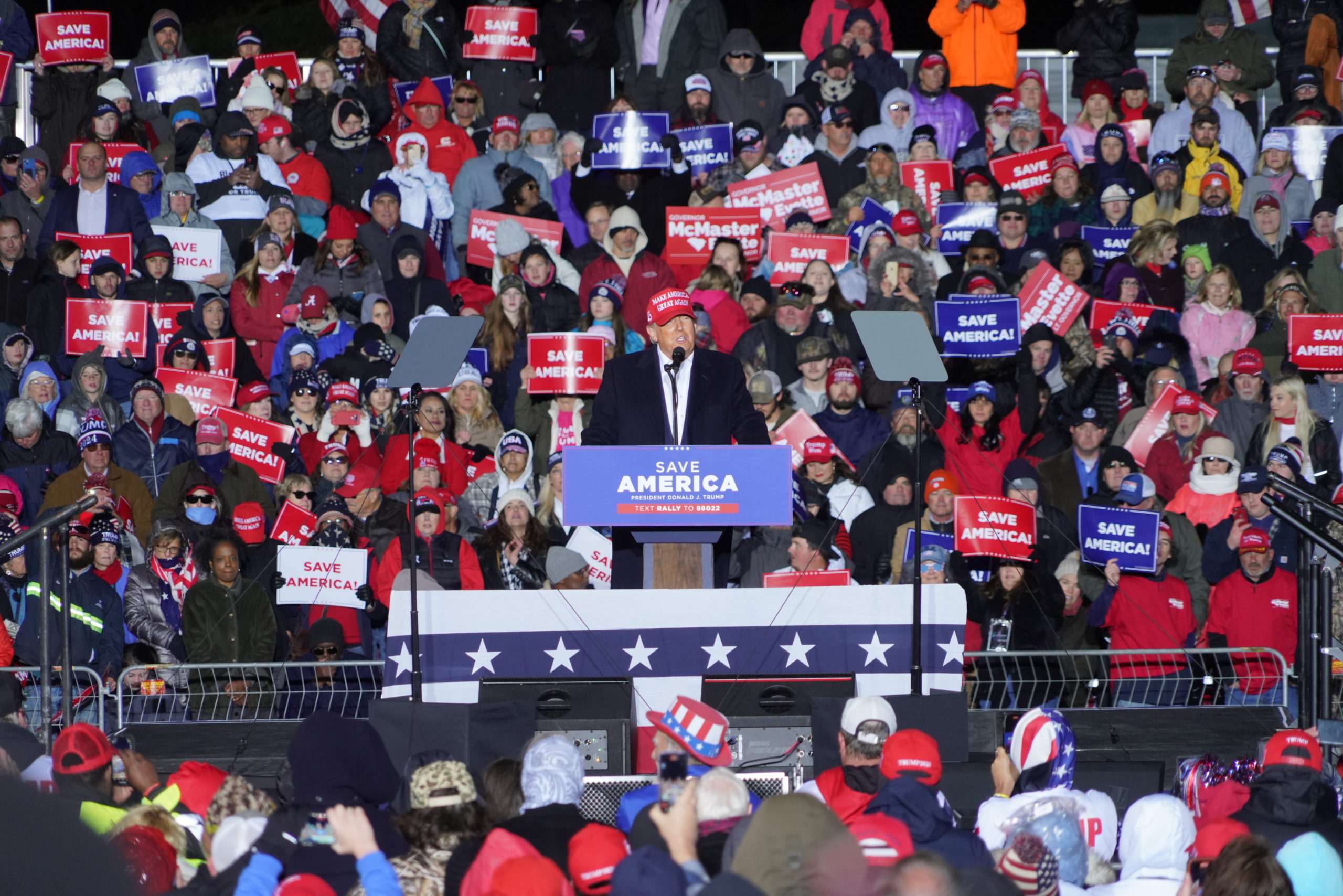 Full of sound and fury – with significance yet to be determined – former U.S. president Donald Trump descended upon Florence, South Carolina on a frigid late winter eve, escalating a proxy war with his rivals in the “Republican” establishment as he sought to rally the MAGA faithful behind his chosen candidates in this critical early-voting state.

“You’re freezing your asses off,” Trump told a crowd of several thousand as temperatures dipped into the mid-thirties by the time he finally took the stage at the Florence Regional Airport shortly after 7:00 p.m. EST on Saturday, March 13, 2022.

“But we’re going to warm it up,” Trump vowed.

“Unfortunately for the patriots of South Carolina you currently have two atrocious RINOs – they’re bad people – in the House, who went to Washington, sold you out and partnered with the Democrats to stab the Republican party – and frankly to stab our country in the back,” Trump said.


RINO stands for “Republican in Name Only.” The term is invoked often by conservative activists – and adherents of Trump’s MAGA movement – in referring to establishment GOP politicians who fail to live up to the party’s stated principles of lower taxes, limited government and more personal freedom.

And make no mistake … there are plenty of those in South Carolina (including plenty of candidates whom Trump has endorsed).

In ripping Rice and Mace, Trump implored South Carolina voters to back GOP challenger Russell Fry in the seventh district and GOP challenger Katie Arrington in the first district – although support for Fry among attendees at the rally was tepid at best (more on that in a moment).

Calling Mace “crazy,” Trump assailed the woman who previously served as one of his top 2016 staffers – slamming her for supporting neoconservative U.S. congresswoman Liz Cheney (a story which was first reported on by this news outlet last April, incidentally).

“Two years ago she begged for my endorsement,” Trump said. “She pledged to be America First all the way. Instead, the first thing Nancy Mace did when she got to Washington, D.C. was start attacking Republicans and hold a fundraiser for whacky Liz Cheney.”

“She’s a terrible person and she has no idea what she’s doing,” Trump continued. “Right after hearing I was going to endorse a really wonderful person, a different candidate, she went to New York and stood in front of the magnificent Trump Tower … and did a commercial insinuating that I was endorsing her.”

“It was untruthful just like everything else she does,” Trump said.

Mace disputed Trump’s characterization of the video, saying he got bad information from Arrington.

“That is a lie put out by my opponent,” she said. “I didn’t travel to New York to film that video. I was already there doing media interviews with Bloomberg regarding legislation. I was a block away when the endorsement happened and walked around the corner. I did not fly there to film the video.”


As for Rice – one of the ten GOP members of congress who voted to impeach Trump for allegedly inciting the January 6, 2021 rioting at the U.S. Capitol building – the 45th president referred to him as “a disaster.”

“He’s respected by no one, he’s laughed at in Washington – he was never thought highly of in Washington,” Trump said. “Tom Rice joined the Democrats deranged impeachment witch hunt hoax. He parroted their lies, he gave aid and comfort to their weaponization of the national security state against domestic political opponents.”

Trump added Rice “looks like a total fool” after his impeachment vote – affirming the latter’s assessment of his own vote as “political suicide.”

“Thankfully, this June you have the chance to dump these grandstanding losers and replace them with two rock solid America First champions,” Trump said.

In the first district proxy war against Mace, Trump backers appear to be rallying around Arrington – who called Trump “the best damn president this country’s ever had” after he invited her to join him onstage.

“Be our number 47,” Arrington told the former president, referring to his potential bid for a second term in the White House. That remark whipped the crowd into a frenzied chant of “We Want Trump.”

While Arrington wowed the crowd, the reception for Fry was muted – even after Trump praised him as a “conservative warrior who will give no quarter to the socialist left.”

Prior to the rally I spoke with Chad Caton, a rabidly pro-Trump internet radio host in Horry County who referred to Fry as “every bit as much of a RINO” as Rice.

That theme was echoed by numerous other people I spoke with at the rally, many of whom seemed reluctant to support Fry despite his receipt of Trump’s imprimatur. In fact, skepticism of establishment SCGOP politicians – like Fry and governor Henry McMaster – ran deep among attendees at this event.

To wit: Even as Trump fawned over McMaster on multiple occasions during the rally, the governor’s MAGA challenger – Harrison “Trucker Bob” Musselwhite – diligently working the crowd, drawing attention to McMaster’s status as a fiscally liberal tool of special interests.

Do I think Musselwhite has a chance against the aging status quo incumbent? No, I do not … but the emergence of a MAGA core that doesn’t reflexively embrace Trump’s favored politicians is a story line I look forward to following up on in the weeks and months to come.

Because it could figure prominently in any number of races … just as the battle for control of the SCGOP (in which Trump also embraced the establishment) is impacting the 2022 races.

Stay tuned for much more coverage from this event (including video content) in the coming days and weeks as this news outlet – which has stayed several steps ahead of the mainstream press on all the major developments in this GOP proxy war – continues providing coverage and context of this internecine battle for the heart and soul of Republicanism.