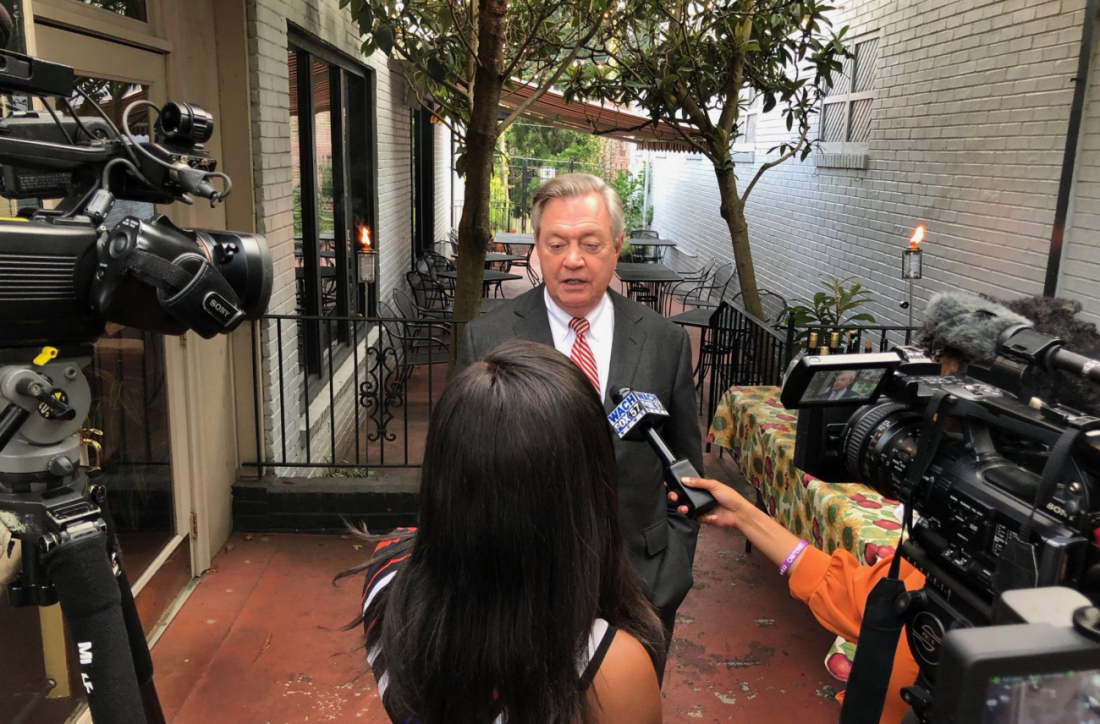 Another battle has been launched in what is fast-becoming a personal war between state Sen. Dick Harpootlian and Satterfield family attorney Eric Bland.

After filing a motion last Monday asking for a gag order and other sanctions against Bland, Harpootlian — one of the “bulldog” attorneys representing Alex Murdaugh — has taken matters into his own hands and is going after Bland’s license to practice law in South Carolina, the attorney told FITSNews on Monday afternoon.

“He wants to start a war with me,” Bland said Monday afternoon, “as opposed to keeping the focus on the case. I’m not going to get in a war with Harpootlian. I have no reason to go to war with him. I think he’s one of the best lawyers our state has ever produced. He’s really just representing a client that he can’t use his skills to get them off, or mitigate the heinous nature of the stuff that he’s done.”


Bland represents the two sons of Gloria Satterfield, the Murdaugh family’s longtime housekeeper and nanny who died in 2018 from injuries received in a trip and fall at the Murdaughs’ Moselle property, where Alex Murdaugh’s wife and son were murdered this past summer.

Murdaugh and others are accused of conspiring to defraud the Satterfield family from its share of the $4.3 million settlement in Gloria’s wrongful death suit.

On behalf of the Satterfield family, Bland and his partner Ronnie Richter have recouped upward of $7 million from Murdaugh’s co-defendants in the suit. Alex Murdaugh is the only party not to have settled thus far and, in fact, has asked to be dismissed from the case now that others have satisfied the loss of what was taken.

As of Monday afternoon, a judge still has not officially been assigned to the civil case.

Faith in the Judicial System

Bland’s push for transparency and refusal to operate from the Good Ole Boy Handbook have earned him consistent praise from the public, particularly in the Lowcountry where many residents have long suffered from what has been seen as two distinct systems of justice there — one for the Murdaugh family, and one for everyone else.

That first system of justice can only exist in the darkness.

“At this time, there is no greater case or action pending in our state and possibly around the country which concerns the public in a number of particulars including but not limited to its faith in the judicial system itself, how clients have been mishandled in this matter and the safety of our citizens,” Bland said Monday afternoon.

The Satterfield case came to light in 2019 after Alex Murdaugh’s now-deceased son Paul was involved in a boat crash in Beaufort County that killed 19-year-old Hampton resident Mallory Beach.

In her coverage of the crash for another publication, FITSNews news director Mandy Matney first brought the public’s attention to the Satterfield’ wrongful death case against Alex Murdaugh.

Not much was known about Gloria Satterfield’s death or the related settlement at the time, but Matney continued to push for greater accountability in the boat crash and other investigations involving the Murdaugh family.

After the still-unsolved double homicide of Maggie and Paul Murdaugh this past summer, the Satterfield family sought legal counsel to help them untangle the mystery of the settlement, from which they had not received one dime.

It was at this time that Bland, a Columbia attorney who specializes in legal malpractice, came to represent the family. And it was Bland’s subsequent investigation that led to the discovery that Murdaugh and others had apparently conspired to defraud the Satterfield family — and others — of their settlement funds using a fake account that had been set up to mislead people into thinking it was that of a legitimate enterprise.

In their Nov. 22 gag order motion, Harpootlian and his co-counsel Jim Griffin argue that Bland’s comments to the press are interfering with Alex Murdaugh’s right to a fair trial.

Harpootlian and Griffin, both of whom have been fixtures in the national media’s coverage of their client, argue that Bland’s comments are designed to prejudice a potential jury in his favor by publicly impugning Murdaugh’s character.

“This civil litigation that we are currently in regarding is full contact so it does not surprise me that all actions are being taken,” Bland said Monday afternoon. “When you don’t have the facts, you argue the law. When you don’t have either, lawyers pound the table and divert.”

Eleven of those charges are related to the Satterfield case.

In their motion, Harpootlian and Griffin also assert that Bland has sought to muddy them in the public eye by questioning their motives and the veracity of the narratives they’ve put forth.

“Mr. Bland, perhaps finding it unsatisfyingly easy to pummel the character of an incarcerated opioid addict who allegedly stole millions,” Harpootlian and Griffin wrote in reference to Murdaugh, “has also engaged in a campaign to disparage the character, credibility, and reputation of his opposing counsel.”

For his part, Bland maintains that as the Satterfield family’s representative he is permitted by the Rules of Professional Conduct to correct any false narratives posited in the public by Murdaugh’s attorneys.

In addition, Bland points out that it was Harpootlian himself who has repeatedly proclaimed Murdaugh’s guilt on national television, including an admission on “Good Morning America” that his client was “reconciled to the fact he’s going to prison.”

“Gagging me isn’t going to stop the continued onslaught of truthful and consistent negative publicity that Alex Murdaugh has been the recipient of from hundreds of objective journalists and newscasters over the past two years,” Bland said.

The gag order motion was the latest head scratcher from Harpootlian and Griffin — who are becoming increasingly ostracized in the state’s legal community for their off-kilter tactics, fact-challenged narratives, diminished clout and plain old desperation in connection with this case.

Once viewed as among the state’s most respected and capable litigators, the two “bulldogs” appear to be going down with Murdaugh’s ship quite willingly.

The move was seen as gauche, but also confusing. Some theorized that the motion was a Trojan horse meant to delay the case and shield Murdaugh from being deposed.

On Wednesday, Bland and Richter filed a scorching response to the motion, likening the tactic to “rearranging the deck chairs on the Titanic.”

The South Carolina Supreme Court’s Office of Disciplinary Counsel is responsible for investigating complaints made against judges and lawyers.

In September, this same body suspended Alex Murdaugh’s license to practice law in the state. A month later, it did the same to Beaufort attorney Cory Fleming, who is a co-defendant in the Satterfield suit.

According to the ODC’s website, around 1,400 complaints are filed against judges each year in South Carolina.

After a complaint for misconduct is received it is screened. If a more extensive investigation is warranted, the Disciplinary Counsel can appoint attorneys to assist him.

In 2013, Harpootlian was profiled on WhistleblowerLaws.com, in which he shared tips on his courtroom practices and offered an anecdote about himself: “Own the courtroom. One of my frequent opponents when I was DA paid me the most eloquent compliment. She said, ‘Harpootlian is like a dog marking his territory in the courtroom. He pisses in every corner and invades your space as frequently as he can. It makes the opposing attorney anxious.’ Anxiety is your friend.”

Is this grievance just another befuddling tactic by Harpootlian, a powerful lawyer used to getting his way and not used to losing?

Bland is certain he has acted in accordance with the code of conduct and that nothing he has said to the press has breeched ethical boundaries.

“I don’t think I’ve done anything wrong,” he said Monday afternoon. “I’ve talked to experts where we have expert affidavits that are coming from ethics experts who are saying that I’m not violating anything.

“I take very seriously my oath to uphold the law. And obviously I take every grievance seriously. I think they — the ODC and the Supreme Court — will look at it objectively. What Dick Harpootlian may do or not do I can’t concern myself with it.”

‘Murdaugh Murders’ Saga: All About Motive