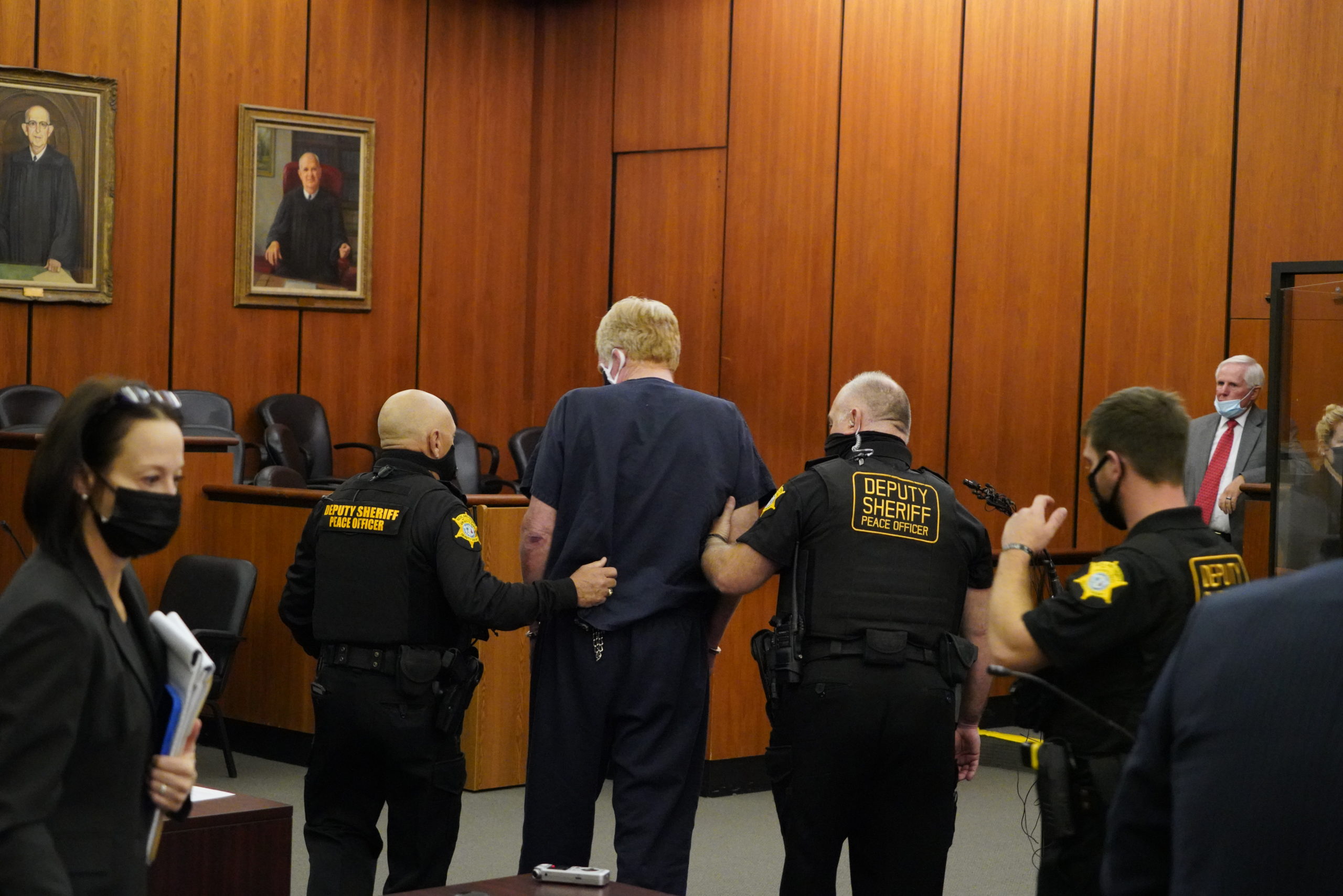 Disgraced Hampton County attorney Alex Murdaugh has been indicted on more than two dozen counts and stands accused of stealing a total of nearly $5 million from his law firm, the family of his deceased housekeeper and three clients, including a South Carolina Highway Patrolman who was injured in the line of duty; Murdaugh then laundered the money for his own use, according to indictments released Friday.

Murdaugh, 53, who was named a person of interest in the June 7, 2021, murders of his wife, Maggie, and son Paul, has been held without bond in the Richland County Detention Center for over a month on larceny charges in the housekeeper case.

He now faces 27 new charges in five indictments handed down by the South Carolina State Grand Jury this week.

The new indictments include:

The bulk of the stolen money — nearly $3.5 million — was taken from the Satterfield family in Beaufort County. None of the charges stem from cases in Murdaugh’s home county of Hampton County — where he worked at the law firm started by his great-grandfather, Peters, Murdaugh, Parker, Eltzroth and Detrick (PMPED), until he resigned in September just a day before an alleged suicide-for-hire incident.

Just one hour before details of the indictments were announced by Attorney General Alan Wilson in a news release Friday, Alex Murdaugh’s attorney Jim Griffin told the (Hilton Head, S.C.) Island Packet, “This doesn’t appear to add anything new to the case other than additional charges.”

The breadth and depth of the new charges filed against Murdaugh clearly contradict Griffin’s assessment.

The Bamberg County Case (Indictment No. 1)

In one of the alleged schemes that took place in Bamberg County, South Carolina, between March and July 2021, Murdaugh is accused of convincing an attorney from another law firm who was working a case with him to write him three checks totaling $792,000 for his share of the legal fees, instead of writing it to PMPED per protocol, according to the indictment.

Murdaugh told the attorney that he was going to structure his fees because of his civil liability on the Mallory Beach boat crash lawsuit, according to the indictment. He lied to the attorney and said that PMPED was aware of this. Murdaugh didn’t structure the fees.

“Murdaugh instead deposited the check(s)…and used this money for his own personal use, for expenses including but not limited to credit card payments, family expenses, and checks written to family, associates and a law partner,” the indictment said.


According to the indictment, PMPED staff caught on to the scheme and questioned the attorney from another firm and Murdaugh about the legal fees.

“Murdaugh told the attorney from another firm that he needed to return the $792,000 to the other attorney’s trust account for reimbursement to PMPED,” the indictment said.

Between January and May of this year, Murdaugh is accused of convincing South Carolina Highway Patrolman Thomas E. Moore, who was injured in the line of duty, of signing over his settlement proceeds to Murdaugh’s law firm, Peters, Murdaugh, Parker, Eltzroth and Detrick, falsely telling Moore that the money would not be available until the lawsuit was complete.

Murdaugh is then accused of depositing the $125,000 in settlement proceeds into the “Forge” account he allegedly created to steal money from clients and others.


In addition, Murdaugh allegedly forged Moore’s signature on a PMPED Disbursement Sheet on which Moore supposedly acknowledged the disbursement, however Moore had never signed the sheet and was unaware of the transaction.

Murdaugh faces four felony counts in the Moore case — breach of trust with fraudulent content, money laundering, computer crime and forgery. All told, these charges hold fines that could exceed $310,000 and imprisonment of up to 25 years.

Between August and September 2016 in Colleton County, South Carolina, Murdaugh allegedly used his “his prestige and reputation as a lawyer” to defraud a man named Manuel Santis-Cristiani, who was being compensated $70,000 for his injures, according to court records.


Murdaugh convinced Santis-Cristiani to make a $70,000 check out for his structured settlement to the infamous “Forge” account. He then deposited the money into a bank account he created under the name “Richard A Murdaugh Sole Prop DBA Forge” and walked away with the man’s $70,000.

He was charged with computer crime and breach of trust with fraudulent intent.

The Satterfield Scheme (Indictment No. 4)

Nine of the new charges are related to the botched Gloria Satterfield settlement.

“The additional indictments brought today in connection with the crimes committed against Gloria and her sons as well as apparently others are welcome, long overdue and were appropriately brought,” attorneys Eric Bland and Ronald Ricter, who are representing the Satterfield family, said in a statement Friday.


Alex Murdaugh has been in jail for more than a month now on two felony counts of obtaining property by false pretenses related to the Satterfield case.

Satterfield was the Murdaugh family’s nanny and housekeeper for more than two decades before she died following the 2018 “trip and fall” incident on the Murdaugh’s Moselle property — where Maggie and Paul Murdaugh were murdered on June 7, 2021.

Murdaugh is accused of orchestrating a scheme to steal millions of dollars from Satterfield’s family through her wrongful death settlement against him. In fact, attorneys Eric Bland and Ronald Richter uncovered the shocking paper trail showing how Alex Murdaugh allegedly stole $3.6 million from Satterfield’s settlement.


While uncovering documents in the Satterfield case, Bland discovered that Alex Murdaugh had set up a fake bank account called “Forge” in 2015. Murdaugh and his best friend Cory Fleming — who was working for the Satterfields — claimed they were devising a structured settlement for Satterfield’s sons through a legitimate company called Forge Consulting LLC. Instead, Fleming made checks out to “Forge” after Murdaugh opened up a Bank of America account under that name.

The Allendale Case (Indictment No. 5)

In Allendale County, on Oct. 7, 2015, Murdaugh is accused of “causing” a check for $338,056.14 intended for investment on behalf of Deon J. Martin to be made out to “Forge” and disbursed from the Client Trust Account at Peters, Murdaugh, Parker, Eltzroth and Detrick.


The check was supposed to be compensation for Martin’s injuries but Murdaugh instead deposited it into a personal account he had created to mimic the name of legitimate business Forge Consulting and used the money for his own use, paying credit card bills, withdrawing as cash and writing checks to himself and associates.

Just over a year later, on Oct. 11, 2016, Murdaugh is accused of taking an additional $45,000 from Martin’s settlement. He again deposited the check into his Forge account and spent the money on personal expenses.

A Bad Month for Murdaugh

The court-appointed receivers, John T. Lay Jr. and former U.S. attorney Peter M. McCoy Jr., now have control over Alex and Buster Murdaugh’s assets. They have the power to sue for the recovery of those assets and investigate where all of Alex’s checks from the “Forge” account were paid.

Last week, Murdaugh was denied bond a second time by S.C. Circuit Court Judge Clifton Newman ruled that Murdaugh was a danger to the community.

In another head-scratching play by Murdaugh’s defense attorneys, Dick Harpootlian and Jim Griffin filed a shocking motion this week asking the court to dismiss the Satterfield lawsuit in an attempt for Alex Murdaugh — the accused ringleader in the ordeal — to escape accountability in civil court.

Alex Murdaugh is facing at least six lawsuits — two for the 2019 boat crash that killed Mallory Beach, two for misappropriated/ stolen funds dating back to 2015 and two for unpaid debt. Murdaugh has only confessed judgment in Randy Murdaugh’s case, according to online court records.

Earlier this week, FITSNews exclusively reported that the state grand jury was meeting this week in Columbia to consider matters related to Alex Murdaugh.

Eric Bland told FITSNews that he believes that this is just the tip of the iceberg.

“There are so many more victims out there,” Bland told FITSNews. “There are more charges coming. The state of South Carolina is making a statement here.”

-Liz Farrell and Will Folks contributed to this report.