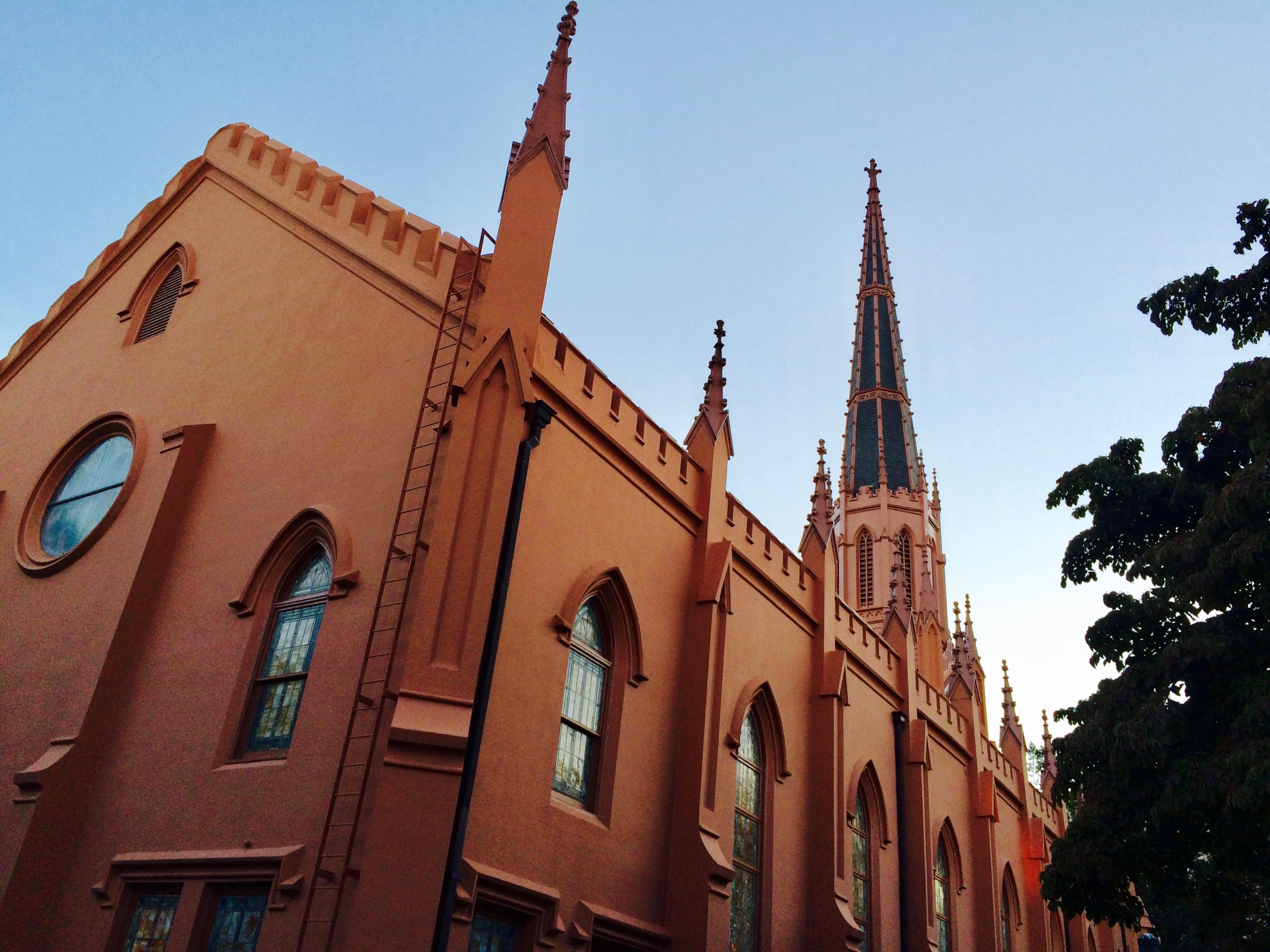 One of South Carolina’s most historic churches is addressing the fallout from a controversial lecture given earlier this month by a visiting professor.

The lecture – entitled “Following Jesus in the Scientific Realm” – was delivered at First Presbyterian Church in downtown Columbia, S.C. on the morning of August 8, 2021 by Douglas Axe, a professor of molecular biology at Biola University in La Miranda, California.

Axe’s presentation was part of the church’s annual summer lectures series, which is focused on the theme of “following Jesus in an uncertain world.”

Founded in 1795, First Presbyterian is one of the Palmetto State’s largest and most well-known houses of worship – with many influential leaders in academia, industry and government lining its pews each Sunday. It is also one of the largest Associate Reformed Presbyterian Church (ARPC) congregations in the entire country.

Among the church’s members? South Carolina governor Henry McMaster and U.S. congressman Joe Wilson. In fact, McMaster and his wife – S.C. first lady Peggy McMaster – were said to have been in attendance at Axe’s lecture last Sunday.

The address – which can be heard here – struck me for the most part as a pretty insightful, eloquent take on the need for “robust dialogue” within the scientific community.

“There’s science – capital ‘S’ – which is the pursuit of the truth and how you go about pursuing the truth honestly, and that means you look, you think carefully, you put your ideas on the table – and you might be wrong,” Axe said during his remarks. “And how you know whether you’re wrong or not is you let other people put their ideas on the table to critique your ideas. That’s how you move forward in the sciences – and it gets really ugly when you won’t let other ideas be put on the table and you won’t let other people speak.”

I concur with that sentiment … in fact, regular readers of this news outlet should recognize Axe’s assessment of the scientific ideal as being consistent with the “marketplace of ideas” principle which serves as the underlying modus operandi of this news outlet.

Basically, we don’t censor speech we disagree with … we hold it up for rigorous analysis and dissection.

When such censorship becomes the norm, “that’s a worrying sign,” according to Axe.

Again … all of this is very simpatico with views espoused by this news outlet for years regarding the virtues of independent thought and the vice of censorship.

Axe’s remarks engendered significant controversy amongst attendees, though, when he shifted to a discussion of the utility of mask mandates – which are quite the topic of conversation in the Palmetto State at the moment – as well concerns over the safety of Covid-19 vaccines.

Axe proceeded to point his listeners to the fine print of the U.S. Food and Drug Administration (FDA)’s emergency use authorization statute – which is the law upon which Covid-19 vaccines were first made available for public use beginning last fall.

His basic point? Covid-19 vaccines remain approved for emergency use only, which he maintains is an important caveat – and one people ought to bear in mind when considering whether to get vaccinated.

As for statements from government entities attesting to the vaccines as having been extensively tested and approved by the FDA, “that’s just a lie,” he said.

“Saying that it has gone through all this testing – it hasn’t, that’s why it’s not approved,” Axe said. “I’m just telling you the truth. I’m not saying the vaccine is dangerous, I’m just saying ‘be careful’ when people are saying things and it’s not true … and they’re trying to prevent robust dialogue.”

Axe also offered a warning related to the safety of the “messenger” ribonucleic acid (RNA) used in Covid-19 vaccines – which help teach human cells how to create the proteins that trigger immune responses.

“There are experts on the mRNA vaccine who are saying we won’t know whether this is safe in the long term for a number of years – and we are doing the experiment on hundreds of millions of people,” Axe said. “There might be cases where you say, ‘well, I have to weight the risk between the virus and the vaccine’ and I totally get that. So, I’m not condemning … I’m not saying you shouldn’t (get the vaccine), I’m just saying lets be really careful.”

South Carolina, incidentally, has one of the lowest vaccination rates in the nation. According to the latest data from the U.S. Centers for Disease Control and Prevention (CDC), 69.4 percent of the U.S. population over the age of 12 has received at least one dose of a Covid-19 vaccine while 59.1 percent are “fully vaccinated.” In the Palmetto State, 53.3 percent of citizens over the age of 12 have received “at least one vaccine” dose while only 45.5 percent have “completed vaccination.”

For those of you keeping score at home, South Carolina ranks No. 41 nationally in terms of vaccine doses administered per 100,000 citizens.

On Tuesday, April 10 – two days after Axe’s appearance – First Presbyterian senior pastor Derek Thomas addressed the controversy in a letter to the congregation.

According to letter, a copy of which was obtained by this news outlet, Axe’s lecture “caused consternation among some of our church members.”

“I was not present but have since listened to it,” Thomas wrote of Axe’s talk. “While the first half of the lecture was instructional, the second half employed the issue of Covid-19 as an illustration of the confluence of science and faith. And while he did not specifically say he was opposed to the vaccine, some of you concluded that he was. Research on Twitter seems to confirm his opposition. And he is at liberty to hold such a point of view.”

However, Thomas noted that while “the nuanced ethical point Dr. Axe was trying to make was valid, the example he chose caused deep divisions within our congregation and is not helpful in getting us through this extremely difficult season.”

Here is a copy of Thomas’ letter to the church …

Thomas wrote that First Presbyterian has “studiously avoided taking sides on this or that aspect of Covid-19 and have followed the CDC guidelines as to in-person worship.”

“Whatever our individual opinions may have been (or continue to be), our stance as a church has largely been governed by a ‘love thy neighbor’ approach,” Thomas wrote. “We have strenuously tried to steer a course that ensures that our members feel safe while worshipping at First Presbyterian Church.”

Thomas added that “for what it is worth, my wife and I received both Pfizer vaccines, and I would take three more if offered!”

“This is a personal choice of mine made prayerfully and in the interests of personal and communal health,” he added.

My thoughts on all this?

First of all, in the interest of full disclosure, I was a member at First Presbyterian Church until 2008 and have many family members and friends who still worship at the church. Its congregants and leaders are good people, in my estimation, and I have always believed the church did an excellent job of equipping and engaging those eager to unearth and explore the intellectual foundations of their faith.

This lecture series is, in fact, another example of how the church is engaging its members on that front – which I believe is a good thing.

Furthermore, I do not accept the implication that this lecture may have influenced the governor or shaped his public policy views regarding vaccination. While I am no fan of McMaster (believing he has done absolutely nothing to steer the ship of state in the right direction on any number of critical fronts during his time in office), when it comes to Covid-19 vaccinations his position is clear: He has received his jabs – and has encouraged others to do the same.

His support has been a matter of public record for many months – and remains his view today, as far as I know. In other words, it is doubtful anything Axe said was going to move him one way or the other on the policy front.

Still, given the rising tide of cases linked to the delta variant of the virus – and the tone deaf commentary on it recently offered by McMaster’s top staffer – the governor probably shouldn’t be surprised some are seeking to make political hay over his proximity to such a discussion.

As for the Covid-19 vaccines themselves, like Thomas I respect an individual’s “personal choice.” All the scientific evidence I have seen thus far attests to the safety and effectiveness of the vaccines – which is why I got both of my shots even after having had Covid at least once (and probably twice).

Again, though, I will continue to oppose any effort by government to make vaccinations compulsory – as well as any effort to demonize those who choose not to get vaccinated.

And I certainly will oppose any renewed push to impose the sort of draconian societal shutdowns that tanked the American economy last spring.

We simply cannot go back to that …

As for Axe, while I disagree with his views on vaccination I believe he artfully raised some very important points regarding the duty of independent thinkers in a free society to stand up and be counted – even if their views are deemed contrarian (or worse).

Again, in a free society we do not silence dissent – we allow it the opportunity to rise or fall on its intrinsic merit (or lack thereof). I understand many at First Presbyterian (and many churchgoers and non-churchgoers reading this article) probably did not like what Axe had to say regarding vaccinations, but I do not fault the church for providing a forum for “robust dialogue.” Nor do I fault anyone in attendance for hearing him out.