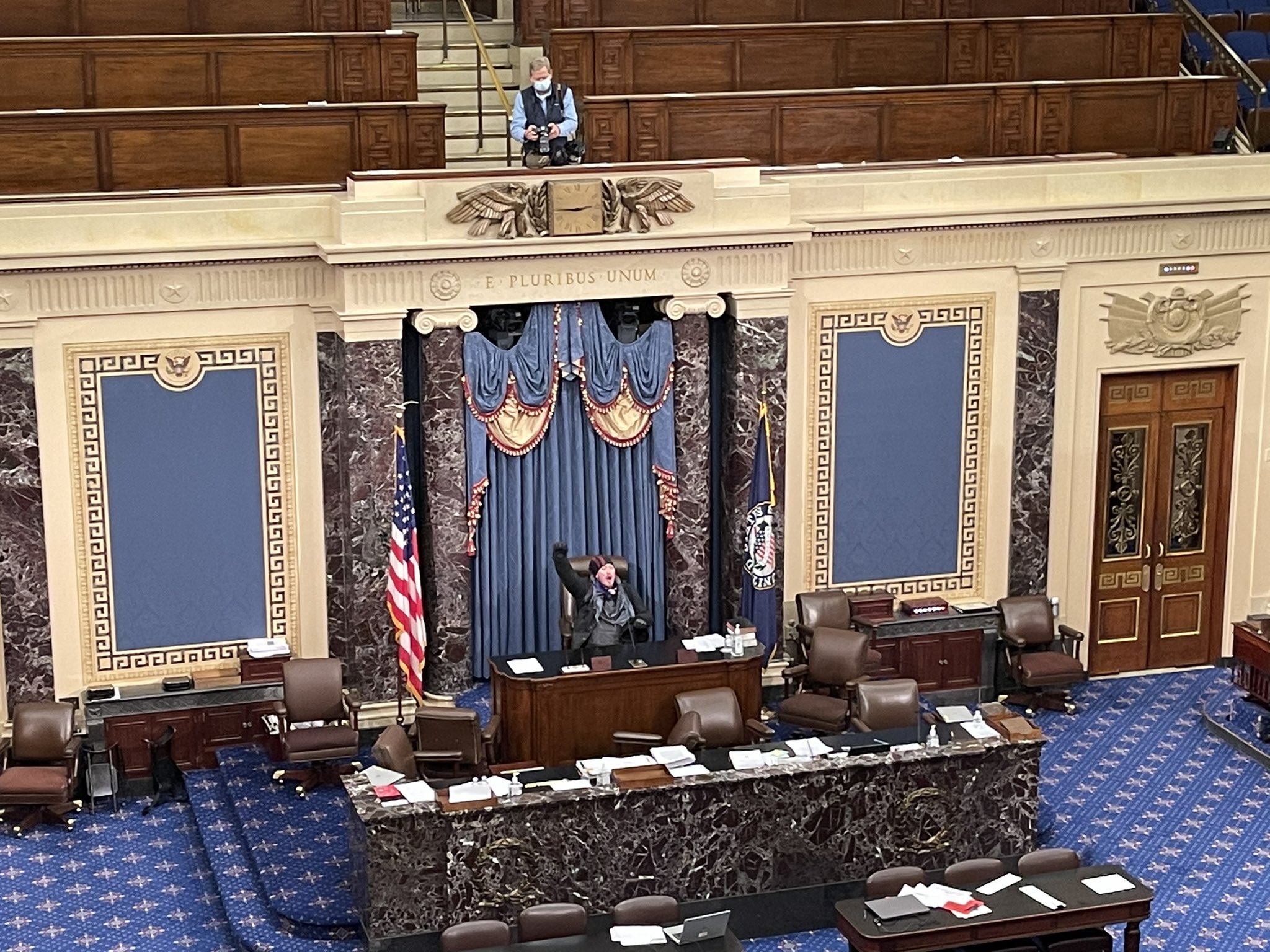 Supporters of U.S. president Donald Trump stormed the U.S. capitol building on Wednesday during the contested certification of electoral votes – forcing the evacuation of dozens of lawmakers and of U.S. vice president Mike Pence, who was presiding over the vote count.

Hundreds of protesters smashed windows and fought through barricades to make their way into the capitol building – arguably among the most secure locations in the world. Some even made their way onto the floor of the U.S. Senate chamber – which only moments earlier had been hosting a debate over the certification of contested electoral votes from the state of Arizona.

“Trump won that election!” one of the rioters yelled from the very dais where Pence had been presiding just moments earlier.

Others stormed the offices of legislative leaders, including the office of U.S. speaker Nancy Pelosi – which was reportedly vandalized.

One female protester sustained a gunshot wound during the violence, although the circumstances that led to her being shot were not immediately clear. Washington, D.C. metropolitan police confirmed late Wednesday that the woman had succumbed to her injuries.

“I was right there when that person came through the door, and that person got shot,” Mullin told George Stephanopoulos of ABC News. “It’s a tragic situation that took place. It left the officer no other choice. This should have never happened. It’s sickening that it took place.”

Prior to the outbreak of violence, Trump slammed Pence for failing to block the certification of electoral votes in favor of U.S. president-elect Joe Biden.

“Mike Pence didn’t have the courage to do what should have been done to protect our Country and our Constitution, giving states a chance to certify a corrected set of facts, not the fraudulent or inaccurate ones which they were asked to previously certify,” Trump tweeted. “USA demands the truth!”

Pence was evacuated to a “secure location” during the storming of the capitol building – as were numerous other members of congress.

“If you are in a public space, find a place to hide or seek cover,” U.S. Capitol Police warned occupants of the building at one point during the melee.

Prior to the certification proceedings, Trump held an event at the White House intended to rally his supporters to his banner.

“We’re going to walk down to the capitol,” Trump said. “And we’re going to cheer on our brave senators and congressmen and women, and we’re probably not going to be cheering so much for some of them.”

Trump did not join the march, however.

“You’ll never take back our country with weakness,” Trump told the crowd at one point during his remarks. “You have to show strength, and you have to be strong.”

After some of the president’s backers took those words literally, Trump issued a series of tweets urging them to “stay peaceful.”

“Please support our Capitol Police and Law Enforcement,” Trump tweeted after the protesters broke through the barricades. “They are truly on the side of our Country. Stay peaceful!”

“I am asking for everyone at the U.S. Capitol to remain peaceful,” Trump added in a follow-up tweet. “No violence! Remember, WE are the Party of law and order – respect the law and our great men and women in Blue. Thank you!”

Criticized for his allegedly “tepid” response, Trump unequivocally told protesters to “go home” in a statement issued from the White House.

“I know your pain, I know your hurt,” he said. “We had an election that was stolen from us. It was a landslide election, and everyone knows it, especially the other side. But you have to go home now. We have to have peace. We have to have law and order.”

“We can’t play into the hands of these people,” Trump continued. “We have to have peace. So go home. We love you; you’re very special.”

Several of Trump’s tweets were later removed by Twitter – which then locked the president’s account for twelve hours claiming he had violated its rules against inciting violence.


While Trump and his followers were universally condemned in the aftermath of the violence, several websites suggested at least some of the protesters were “plants” by radical leftist groups – including Antifa.

“The storming of the capitol building was initiated by left-wing provocateurs who met with Capitol Police yesterday and planned the event,” the website Natural News alleged, calling the violence as a “false flag.”

Make no mistake: This news outlet unequivocally condemns the use of violence – irrespective of its ideological point of origin. As we noted in responding to the violence that rocked our nation last spring, “this has to stop – and it has to stop now.”