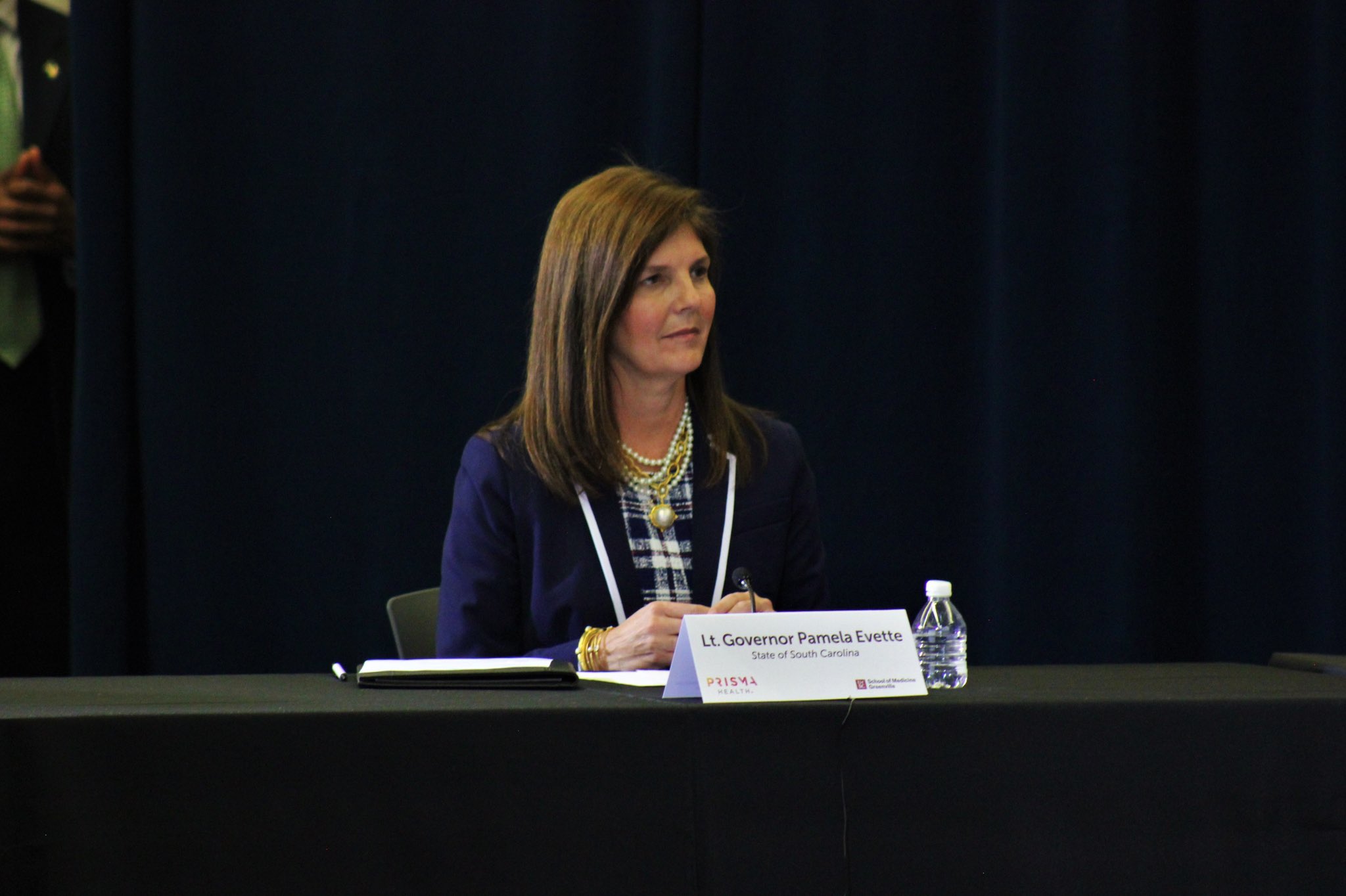 Last month we reported (here and here) on the ramped-up political activities of businesswoman Pamela Evette, South Carolina’s 93rd lieutenant governor. Specifically, we noted how Evette – who was plucked from obscurity by governor Henry McMaster to run on his ticket in 2018 – appears to have declared her independence from her former running mate in anticipation of a prospective 2022 gubernatorial campaign of her own.

Which, of course, has revived speculation as to whether the politically weakened McMaster intends to seek another four-year term … (as of now, the answer to that question is ‘yes‘).

This month, Evette has continued working to raise her political profile – including a trip to the Palmetto Lowcountry last week that reportedly saw her attend several high-profile conservative gatherings.

Among the events attended by Evette? A pair of fundraisers that featured multiple prominent Republican donors – including one event that afforded her access to “several big-name school choice backers.”

“She was mingling with the Republican donor crowd for sure,” a source familiar with Evette’s Lowcountry travels told us.

Did her efforts pay off? We shall see …

Evette also paid a visit during her trip to Ellifox, a Charleston, S.C. store that provides “curated children’s collections” with an emphasis on “specialized, custom embroidery.”

“I loved visiting Ellifox,” Evette tweeted, touting it as “a woman owned and operated business.”

She even gave the store a holiday shopping plug …

“If you’re in the Charleston area make plans to go and find great products or find them online and pick out the perfect gift on their website,” Evette added in a follow-up tweet.

The store’s owner – Lauren Fox – was elated by the attention. And appreciated Evette offering her some free business pointers, too.

“You know it’s not every day that the lieutenant governor of South Carolina stops by to chat about small business, the importance of shopping small this holiday season and (gives) me a gift – some amazing nuggets in the form of business advice that I will never forget,” Fox wrote.

Evette, readers will recall, was the founder and chief executive officer of Quality Business Solutions, a human resources and payroll firm based in Travelers Rest, S.C.

“Thanks to one of my followers who thought meeting the extraordinary Pamela Evette would be good for me,” Fox continued. “She makes me believe anything is possible. She gave me encouragement I didn’t know I needed. And she is a true role model for all.”

Fox also offered a potential preview of Evette’s 2022 gubernatorial messaging, referring to the 53-year-old Ohio native as a “female entrepreneur who built a wildly successful company and who has now decided to give back in the form of public service.”

“The world needs more people just like her,” Fox wrote.

While Evette’s elevated political profile is continuing to attract attention (she visited another female-owned small business earlier today), most of the discussion surrounding her recent moves has reverted back to McMaster.

Specifically, will the 73-year-old seek another four-year term in 2022?

In other words … does Evette know something the other contenders for this office don’t know?


Readers will recall that McMaster – who has struggled mightily this year in responding to the Covid-19 pandemic – is likely to face another challenge in 2022 from Upstate businessman John Warren, who nearly defeated the incumbent two-and-a-half years ago in the 2018 GOP primary.

Warren is likely to invest heavily in a second run at the governor’s office, and given McMaster’s ongoing impotence/ incompetence many believe he is a good bet to defeat the career politician.

In the event the incumbent decides against running, odds are he would not make an announcement regarding his plans until after the 2021 legislative session so as to avoid sacrificing leverage with state lawmakers.

To the extent he has any leverage left …

As for Evette, we continue to believe she is not a viable 2022 gubernatorial prospect … at least not with Warren in the race (Upstate Republicans clearly seem to be gravitating toward his candidacy, not hers).

Again, we are a long way away from the June 2022 Republican gubernatorial primary, but it is very interesting to watch the moves being made by those who have designs on entering the fray …