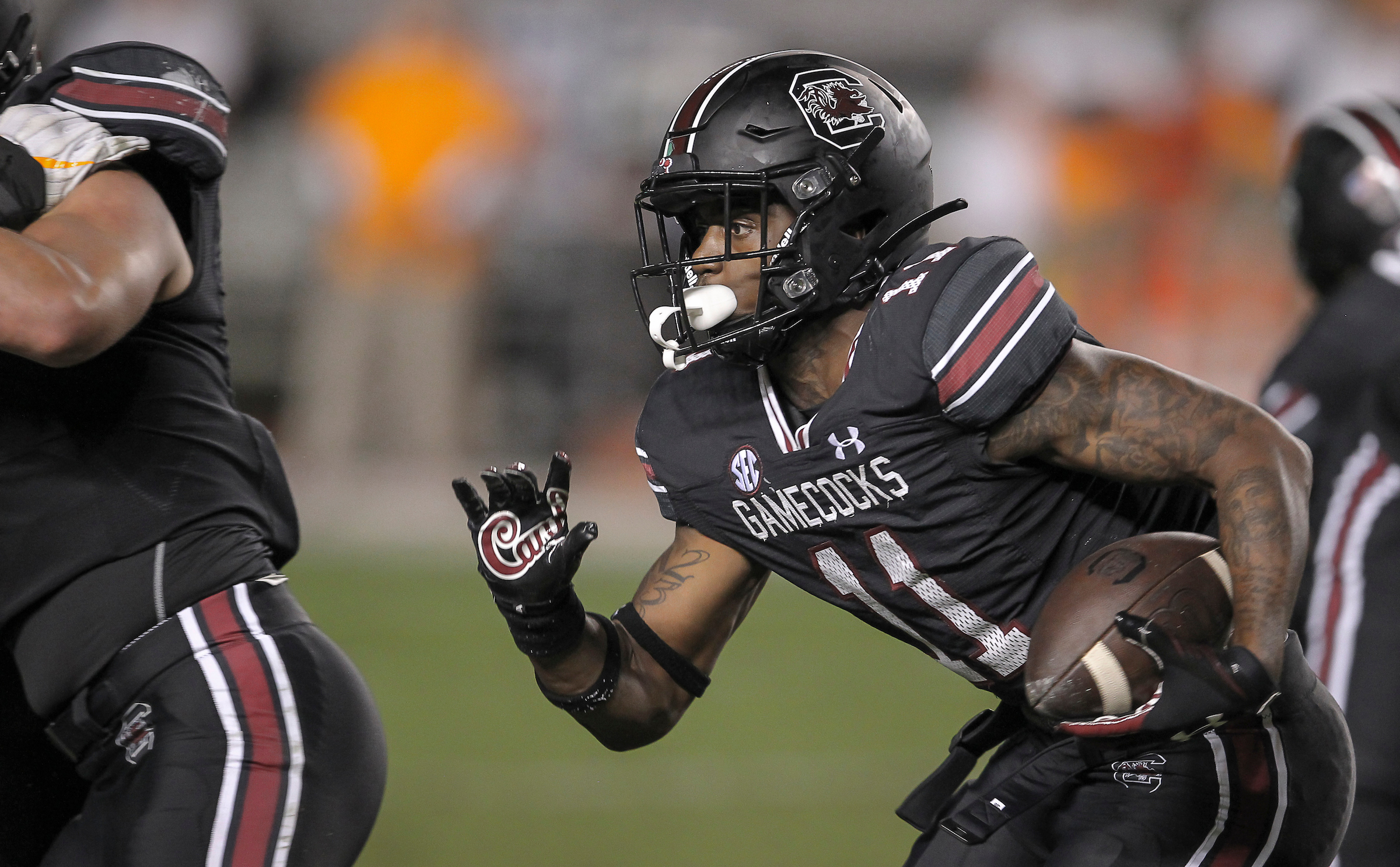 After earning a 41-7 victory over Vanderbilt in Nashville, Tennessee last weekend, fifth-year South Carolina head coach Will Muschamp and his Gamecocks face another must-win contest this Saturday against No. 15 Auburn and eighth-year head coach Gus Malzahn, who narrowly defeated the Arkansas Razorbacks last weekend with partial help from a controversial officiating decision on the game’s final drive.

Kickoff for this tilt is scheduled for 12:00 p.m. EDT as South Carolina returns to the friendly confines of Williams-Brice Stadium for the first time since their season-opening loss to Tennessee on September 26.

Opportunities abound for South Carolina to gain some ground in the middle of a packed SEC eastern division, but a loss would essentially eliminate any shot the Gamecocks have of even competing for a division crown – something which has eluded the program ever since it captured its lone division title ten years ago.

While South Carolina is a narrow underdog at home, if a few things go the Gamecocks way they could be “roosting” at .500 with a road date looming against the defending national champion LSU Tigers – owners of the second-worst passing defense in the nation under defensive coordinator Bo Pelini.

With LSU off this weekend following a 45-41 loss to Missouri on October 10, this might be the Gamecocks best chance to beat the Tigers in a long time …

But before heading west to do battle with the Bayou Bengals, Muschamp and his squad must deal with the Tigers from the Plains as they search for their first win over a ranked opponent in 370 days.

The last time the Gamecocks beat a ranked team? October 12, 2019, when South Carolina pulled the ultimate shocker on the road against No. 3 Georgia, 20-17.

A Gamecock win would be a big ask, though, considering they haven’t won a game in this short-lived conference rivalry series in 87 years – when coach W.L “Billy” Laval and the Gamecocks beat Auburn 16-14 in Birmingham in 1933.

South Carolina has kept it close during the schools’ rare get-togethers, losing by an average of 3.6 points per game in the last four regular-season contests between the two teams – who are only meeting this year because the SEC controversially decided to pursue a ten-game, conference-only slate in the wake of the coronavirus pandemic.

In the most recent rendition of the series in Columbia, former coach Steve Spurrier and the tenth-ranked Gamecocks were stunned 16-13 by the Tigers on October 1, 2011. Then, in 2014, South Carolina couldn’t quite keep up in a back-and-forth scoring battle at Jordan-Hare Stadium.

Quarterback Dylan Thompson tossed for 402 yards, five touchdowns, and three interceptions in the loss to the fourth-ranked Tigers.

South Carolina can’t quite seem to seal the deal against Auburn, but a few statistical arrows are pointing in the Gamecocks’ direction this week, something that was obviously quite rare for last fall’s team – which finished 4-8 behind one of the nation’s worst offenses.

The difference this season is that first-year coordinator Mike Bobo’s offense can control football games.


While dropped passes, poor pass-blocking, and special teams/ defensive errors were among the many symptoms that led to losses against Florida and Tennessee, the Gamecocks now have the No. 6 scoring and rushing offense in the SEC, something that would have been unheard of a year ago.

But what I’m referring to in particular is South Carolina’s offense and its ability to win the time of possession battle. By allowing graduate transfer quarterback Colin Hill to take his time while leaning on the two-headed monster of running back Kevin Harris (326 yards, four touchdowns) and wide receiver Shi Smith (26 receptions, 271 yards, two touchdowns) the Gamecocks have controlled the rock for well over 34 minutes per game, an impressive feat to say the least.

And while South Carolina has only converted 18 of their 46 third down attempts on the season, Bobo should be looking to exploit an Auburn defense that has been horrendous on the drive-defining down, giving up 27 of 48 attempts in wins against Kentucky and Arkansas and a loss to Georgia. That ranks the Tigers No. 71 nationally (out of the 77 teams currently playing college football) in this critical statistic.

To take full advantage of this opportunity, South Carolina will need to find consistency on the offensive line – shoring up a unit that has allowed ten sacks in just three game (including two in the first half against Vanderbilt).

The Gamecocks were competitive against Tennessee and Florida, but what team can take four sacks in consecutive weeks to two ranked opponents? It certainly can’t happen for a third time…

Another area of concern? The number of tackles for loss this team has allowed …

So, look for Auburn to be very aggressive in bringing defensive pressure … and if they can play the game in the Gamecocks’ backfield, South Carolina could find itself in real trouble.

So what does Auburn have to offer on offense? Not much.

The Tigers rank No. 67 in the NCAA and No. 13 in the SEC with only 328.7 yards per game of total production. Meanwhile, the Gamecocks overall defense ranks No. 18 in the NCAA, allowing 330.3 yards per game.

Sophomore quarterback Bo Nix has been underwhelming under center, averaging just 199.0 passing yards per game and only completing 56.8 percent of passes.

That means the Gamecocks must zero in on stopping Auburn running back, Tank Bigsby. The 6-foot-0, 204-pound true freshman from LaGrange, Georgia saw limited playing time in the Tigers’ first two games – accounting for just 46 yards on 15 carries. But after a 146-yard performance against the Razorbacks (which included 97 yards gained after contact), it’s no wonder he is being heralded by the Alabama press as “Running Like Cadillac” – a reference to former Auburn standout (and current running backs coach) Cadillac Williams.

Oh, Bigsby (above) can catch the ball too – tallying 68 receiving yards in the Tigers’ loss to Georgia.

Give credit to the Gamecocks’ bend-but-not-break defensive mentality, though. While South Carolina surrendered an average of 34.5 points to the Vols and the Gators, Muschamp’s unit is No. 3 in the nation on third down – holding three SEC teams to just six conversions out of 31 total attempts.

Meanwhile, the Gamecocks are No. 1 in the nation in fourth-down defense, not allowing a single conversion on four attempts this season.

On the turnover front, South Carolina’s Hill has only tossed one interception, and while Auburn’s Nix hasn’t been explosive – he has taken care of the football, throwing zero interceptions. The Gamecocks will have to get a better handle on the ball in their ground game, though, having already coughed up three fumbles this season.

Saturday poses a great opportunity for South Carolina to finally beat a ranked team – something Muschamp has done precious little of since being named the Gamecocks’ head coach. The 49-year-old Rome, Georgia native is just 2-13 against ranked opponents during his tenure in Columbia, S.C. During his four seasons at Florida, Muschamp went 5-14 against ranked foes.

For South Carolina, a win is very much within reach – but a loss would likely end the Gamecocks chance of finishing .500, which was considered to be a potentially attainable goal at the beginning of the season.

On the other hand, Auburn – which was anointed as the preseason No. 11 team in the nation – really hasn’t proven anything under Malzahn, and a loss to the 1-2, unranked Gamecocks would cause the temperature under his hot seat to soar.