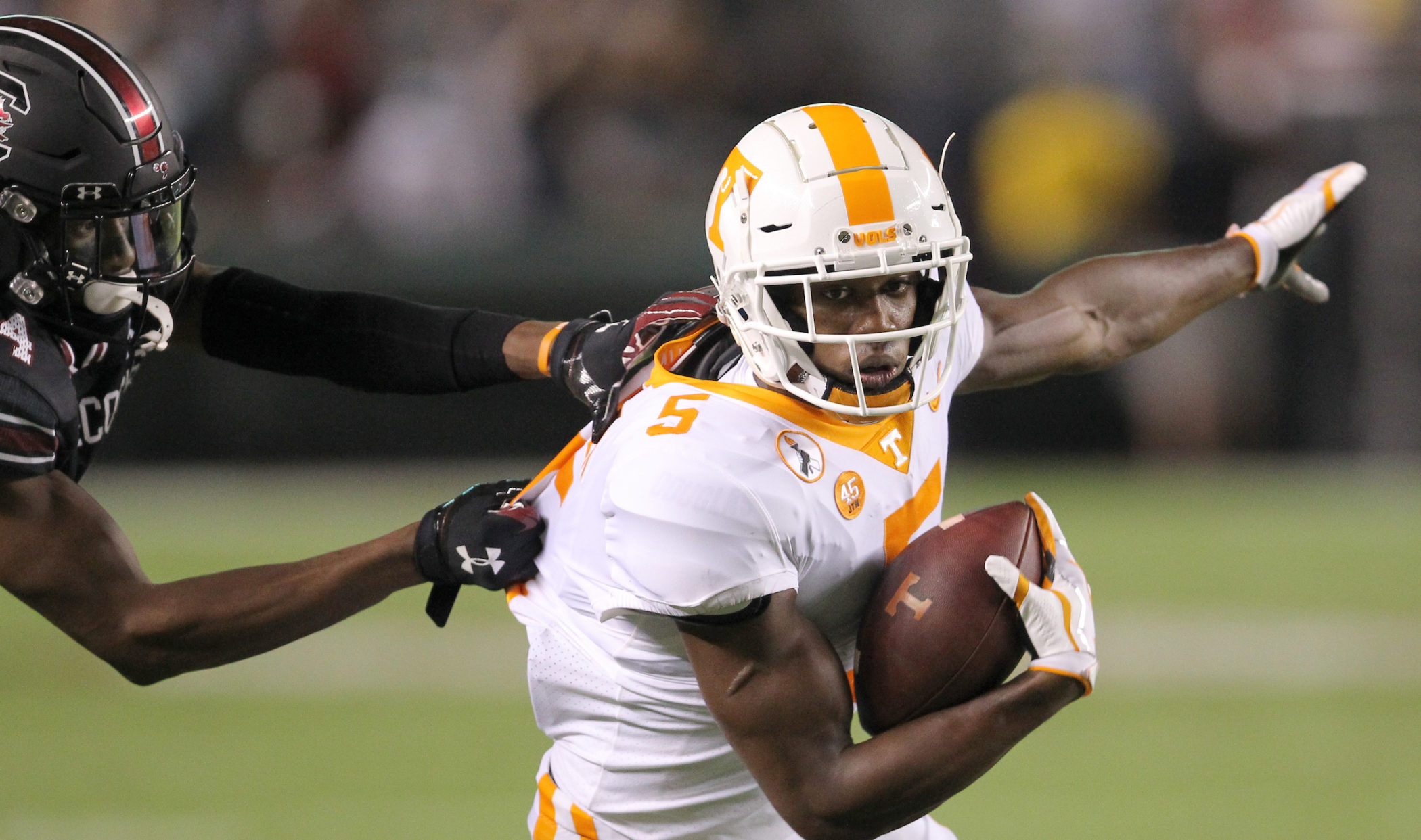 The University of South Carolina football team’s rivalry with Tennessee reverted to its nail-biting form on Saturday night at Williams Brice stadium in downtown Columbia, S.C. For the eighth time in the last nine meetings, this SEC eastern division showdown was settled by six points or less – the lone exception being last year’s Volunteer blowout in Knoxville.

Head coach Jeremy Pruitt’s sixteenth-ranked Tennessee squad came out on top in this tilt – a Covid-19-delayed season opener for both teams as they kicked off this controversial, conference-only scheduling format.

After jumping out to a two-touchdown lead, Tennessee (1-0) didn’t seal its 31-27 win over the Gamecocks (0-1) until late in the fourth quarter. That’s when its special teams recovered a live ball that deflected off the leg of defensive back Cam Smith – who was blocking on a punt return with just a minute-and-a-half on the clock.

It was a rough night for Smith – a redshirt freshman from Blythewood, S.C. The 6-foot-0, 185-pound defensive back was beaten by Volunteer wide receiver Josh Palmer for the game-winning touchdown only moments earlier.

Smith was pressed into duty after starting cornerback Israel Mukuama – the hero of last year’s improbable upset win over No. 3 Georgia – was forced from the game with a groin injury.

The win was Tennessee’s seventh in a row dating back to last year’s emphatic victory over the Gamecocks. Meanwhile, it was embattled head coach Will Muschamp’s fourth straight loss – although the handful of South Carolina fans granted access to this socially distanced home opener had to appreciate the improved effort from a program that went 4-8 a year ago (especially upgrades on the offensive side of the ball).

After failing to score a touchdown in its final two games of 2019, the new-look South Carolina offense marched 75 yards to pay dirt on its first possession of 2020 under new coordinator Mike Bobo – with sophomore tailback Kevin Harris capping the drive with a diving three-yard touchdown run.

After stalling out the rest of the first half, Bobo’s unit got it cranked up again in the third quarter – scoring on a pair of seventy-plus yard drives to tie the game at 21 points apiece.

Momentum had swung decidedly in South Carolina’s favor late in the third quarter, but as was the case a year ago the Gamecocks just couldn’t hold on in the final stanza – with Tennessee quarterback Jarrett Guarantano hitting Palmer on a 32-yard touchdown strike with 9:35 remaining to take a lead they would never surrender.

The 6-foot-4, 230-pound senior from Lodi, New Jersey finished the night completing 19 of 31 passes for 259 yards with one touchdown.

South Carolina – which was outscored 107-64 in the fourth quarter last year – was edged 7-6 in the final frame by the Volunteers.

For the Gamecocks, fifth-year senior Colin Hill connected on 25 of 39 passes for 290 yards with one touchdown and one interception. That lone pick – a deflection off of the hands of wide receiver Shi Smith – proved costly, though. Volunteers linebacker Henry To’o To’o scooped the ball out of the air and bounded 32 yards down the Tennessee sideline to the end zone.

Aside from that one mistake, Smith shone during his debut as the Gamecocks’ featured receiver – hauling in ten passes for 140 yards, including a 29-yard touchdown strike from Hill midway through the third quarter.

Harris paced the Gamecock ground game, rushing 13 times for 55 yards with the aforementioned touchdown on the opening drive.

For Tennessee, Ty Chandler carried 13 times for 86 yards while Eric Gray added forty yards on twelve carries with one touchdown.

Palmer was the leading receiver with 85 yards on six catches (including the go-ahead score), while senior wide receiver Brandon Johnson had three catches for 73 yards – including an acrobatic one-handed grab in the first half over Gamecock cornerback Jammie Robinson.

With the loss, South Carolina fell to 10-27-2 all-time against the Volunteers. Meanwhile, Muschamp lost for just the second time as a head coach to Tennessee – falling to 26-26 overall as he begins his fifth year at the helm in Columbia, S.C. The 49-year-old Rome, Georgia native is now 15-18 in conference play and 2-13 against ranked opponents during his tenure in Columbia, S.C.

Muschamp invited criticism from fans when he decided to kick a field goal with 3:16 remaining in the game on a fourth-and-12 play from the Tennessee 28-yard-line.

The three points did nothing to help South Carolina, keeping them a touchdown away from victory.

Entering the season, Muschamp was on arguably the hottest seat of any head coach in the conference. South Carolina did not fire him following last year’s disastrous 4-8 campaign – partly because the school was unable to afford his massive buyout.

The price tag for firing Muschamp still looms large … particularly in the Covid-era of empty stadiums.

Muschamp received his most recent raise and contract extension from athletics director Ray Tanner and the South Carolina board of trustees following an underwhelming 7-6 campaign in 2018.

South Carolina travels to Gainesville, Florida on Saturday, October 3, 2020 to do battle in the Swamp against the No. 5 Florida Gators. Head coach Dan Mullen’s team eviscerated unranked Ole Miss 51-35 in its season opener on Saturday, with quarterback Kyle Trask throwing six touchdowns – tying a school record against an SEC opponent.

Muschamp coached at Florida from 2011-2014, going 28-21 overall with a 17-15 mark against SEC opponents and a 5-14 record against ranked opponents. South Carolina has a 9-28-3 all-time record against Florida – with four of those wins coming courtesy of former Florida coach Steve Spurrier.

‘Spurs Up?’ Massive Gamecock Statue Is Missing Something …