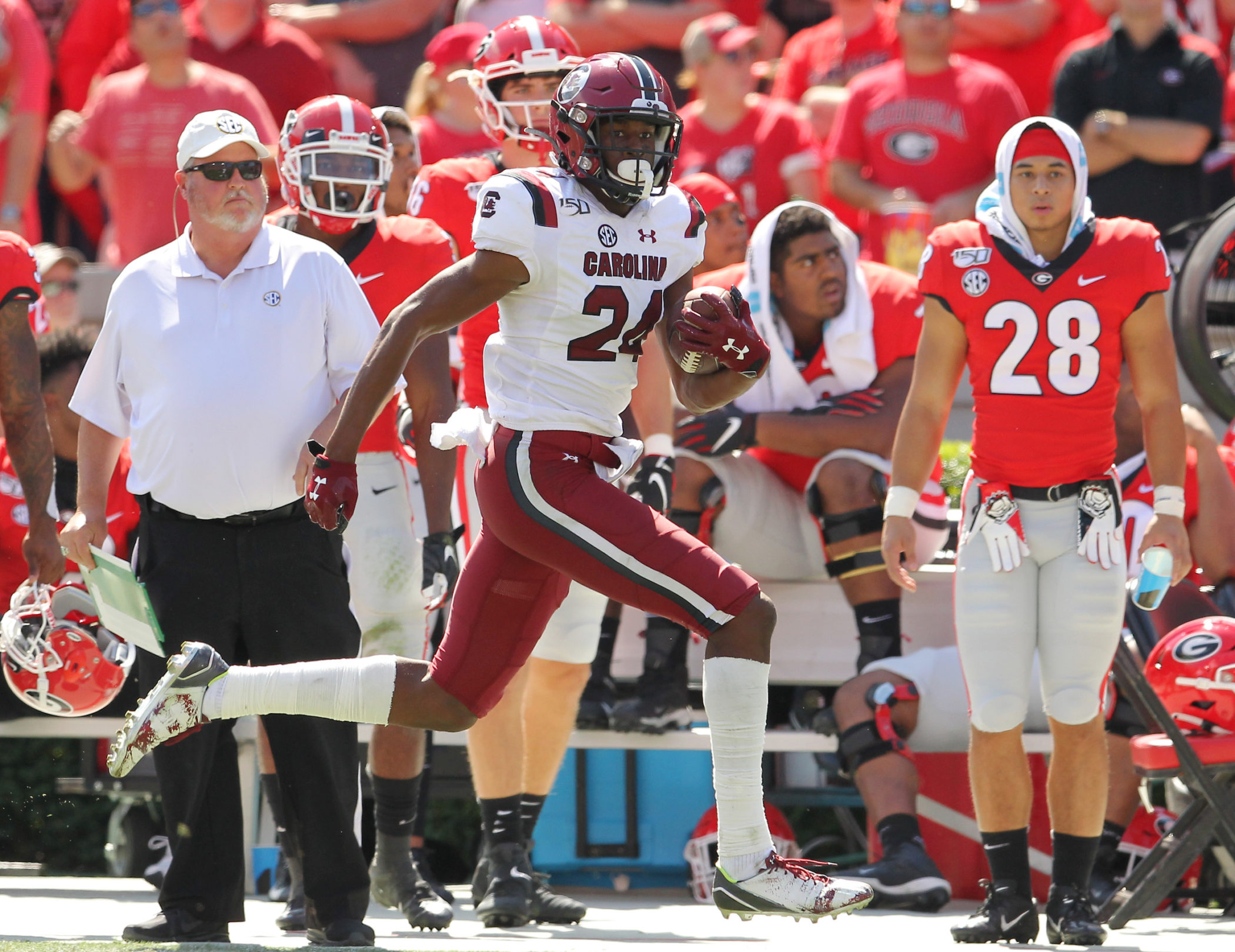 The University of South Carolina football team won the biggest game of the Will Muschamp era on Saturday – defeating third-ranked Georgia 20-17 at Sanford Stadium in Athens in double overtime. The victory revived the Gamecocks’ bowl prospects and buoyed beleaguered fans who only two weeks ago were openly discussing whether Muschamp should be fired.

South Carolina entered the game as a 21.5-point underdog, but clinched its first win over a top five opponent in six years when Bulldog senior placekicker Rodrigo Blankenship sailed a potentially game-tying 42-yard field goal wide left at the end of the second overtime.

Blankenship’s miss – his first of the season – came after South Carolina junior placekicker Parker White missed a 33-yard field goal wide right that would have won the game at the end of the first overtime. Blankenship had a kick blocked in the first half, but prior to that he had connected on all twelve field goals this season.

What did the win mean for Muschamp?

“It don’t mean a damn thing to me,” the 48-year-old coach told ESPN’s Allison Williams after the game. “I’m happy for our kids.”

Muschamp (above) was a defensive back at Georgia from 1991-1994 – working his way up from freshman walk-on to team captain during his senior season. In his fourth season in Columbia, S.C., he has been on the hottest of hot seats after South Carolina’s disappointing start – but the temperature beneath him has no doubt cooled considerably following an upset win over his alma mater.

Entering Saturday’s game in Athens, South Carolina was an anemic 1-10 against ranked teams under Muschamp – its lone victory coming against then-No. 18 Tennessee during the former Florida coach’s first season in Columbia in 2016.

Amazingly, Muschamp hadn’t defeated a ranked opponent since … until Saturday.

How did the Gamecocks (3-3, 2-2 SEC) put themselves in position to knock off the No. 3 team in America on its home field? Two words: Israel Mukuamu. The 6-foot-4, 205-pound cornerback from Bossier City, Louisiana intercepted Georgia’s Heisman Trophy candidate Jake Fromm three times – including one interception in overtime and another in the second quarter that Mukuamu took back 53 yards for a go-ahead touchdown.

Entering Saturday’s game, Fromm had not thrown an interception all season.

Mukuamu also recorded 11 tackles against the Bulldogs (5-1, 2-1 SEC), second only to sophomore linebacker Ernest Jones – a native of Waycross, Georgia who led the team with 12 tackles in his return to his home state.

Look for Mukuamu (below) to be named the SEC defensive player of the week after his sensational performance between the hedges – where South Carolina had not won since 2011, Jadeveon Clowney’s freshman season. The Gamecocks had not beaten Georgia at all since 2014 – when Steve Spurrier was still pacing the South Carolina sideline.

The Gamecocks also got standout performances from defensive linemen Javon Kinlaw and D.J. Wonnum – who combined for 1.5 sacks against Fromm, who had only been sacked once in five previous games.

Coordinator Travaris Robinson’s unit surrendered 468 yards and 30 first downs – but forced four turnovers (Fromm fumbled once in addition to his three picks) and held the Bulldogs to fifty percent on third down.

South Carolina had to excel on defense after losing starting quarterback Ryan Hilinski to a knee injury early in the second half. The 6-foot-3, 230-pound true freshman from Orange, California left the game with 9:25 remaining in the third quarter when Georgia defensive back Lewis Cline was blocked into him on a third-and-long play.

Hilinski completed 15 of 20 passes for 116 yards and a touchdown prior to his exit. Trainers kept his injured knee on ice as he watched the second half from the sidelines. Hilinski left the field after the game with a stabilizing brace around his injured knee, requiring assistance from a South Carolina trainer to make it to the locker room.

Obviously his status moving forward will be critical in determining how the Gamecocks finish the second half of their season.

Redshirt freshman Dakereon Joyner filled in admirably in Hilinski’s absence, although the South Carolina offense failed to score during the final quarter-and-a-half of regulation with him at the helm. Joyner completed six of twelve passes for 39 yards. He also ran six times for 28 yards.

The 6-foot-1, 205-pound native of North Charleston, S.C. did not turn the football over, though. Nor did any Gamecock.

The same could not be said for head coach Kirby Smart’s squad, however. After the game, Smart lamented Fromm’s four turnovers as the key to the Gameocks’ stunning upset victory.

“Turnovers … there’s a lot of things we can do better as coaches, but you can’t turn the ball over,” Smart said. “You’re not going to win when you have four turnovers.”

That is true, but Georgia fans were livid at their head coach for conservative play-calling early – and then abandoning the running game too early in the second half. Smart is also getting roasted by his fan base for a pair of coaching miscues late in the game. With eight seconds remaining on the clock in regulation, Smart opted against attempting what would have been a 55-yard field goal for one more play. Fromm’s pass was incomplete – but Georgia was called for an illegal shift penalty which knocked them out of field goal range.

Smart was also criticized for calling a timeout in the second overtime when South Carolina had the football and was attempting to convert a critical fourth-and-one play. Out of timeouts, the Gamecocks looked confused offensively as the play clock was winding down but Smart bailed them out by calling a timeout on defense.