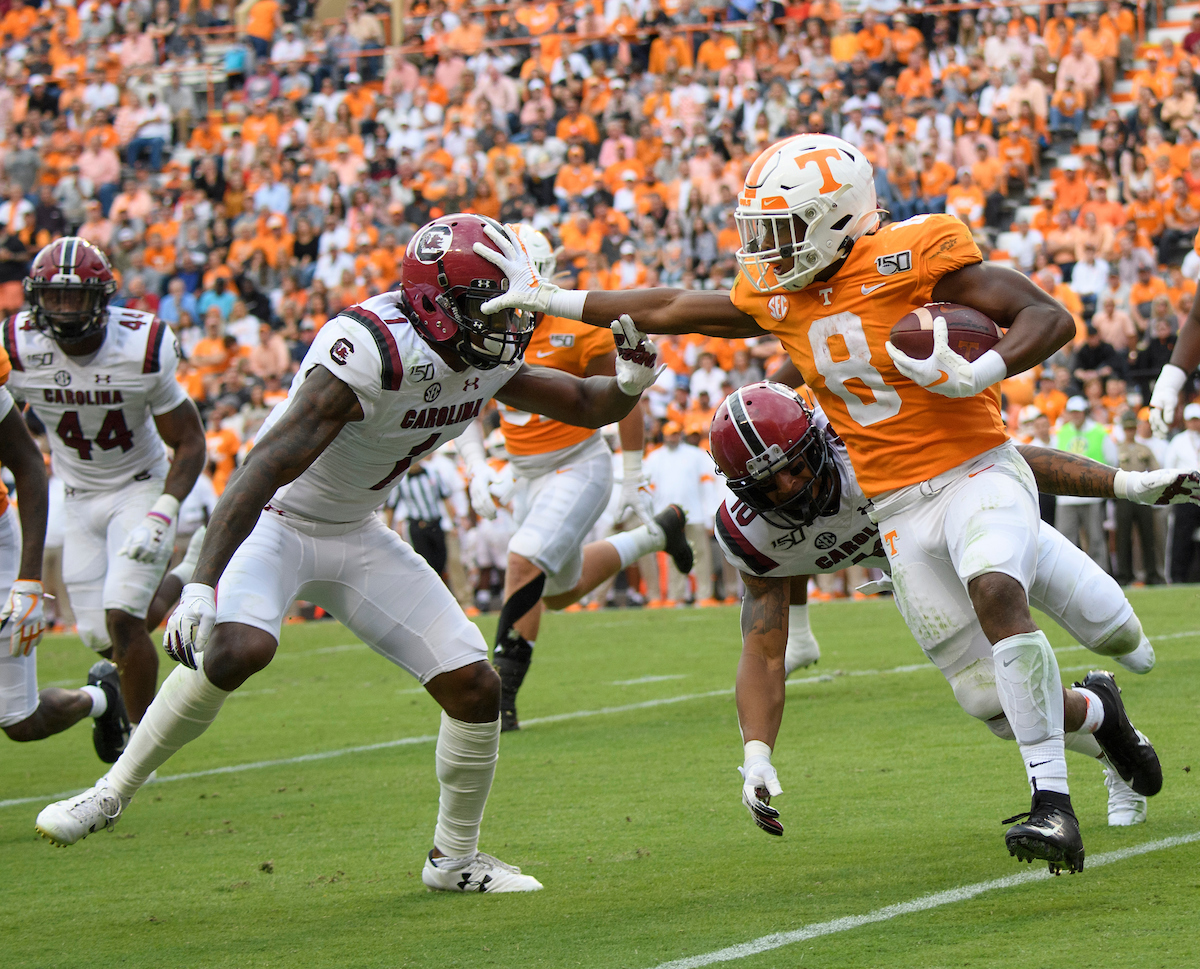 The University of South Carolina football team coughed up a must-win game against the Tennessee Volunteers in Knoxville, Tennessee on Saturday night – squandering another second half lead and putting themselves in the bleakest of positions for postseason play.

Head coach Will Muschamp’s team was eviscerated in the second half … failing to score on offense and surrendering 24 unanswered points to the Volunteers (3-5, 2-3 SEC), who prior to Saturday’s win were plumbing the depths of their rebuilding effort under second-year head coach Jeremy Pruitt.

Heading into this game Muschamp had never lost to Tennessee – going 4-0 against the Volunteers as Florida’s head coach from 2011-2014 and winning his first three games against them at the helm of the Gamecock program.

That streak is now over …

Also likely over? The Gamecocks’ streak of three consecutive bowl games under Muschamp (above) – who is likely to start feeling the heat under his seat once again. South Carolina (3-5, 2-4 SEC) must win three of its four remaining games to become bowl eligible … a daunting task indeed considering a pair of ranked teams (including the defending national champion Clemson Tigers) remain on their schedule.

Given the way they played in the second half in Knoxville, South Carolina will be lucky to win one of those four games.

Led by senior wide receiver Jauan Jennings – who actually started the game at quarterback in place of injured starter Brian Maurer – Tennessee erupted for a season-high 485 yards of total offense against the Gamecocks. The Vols also scored twice on special teams in addition to pitching the aforementioned second half shutout on defense.

“Don’t shovel dirt on this Tennessee football season,” noted reporter Blake Toppmeyer of The Tennessean. “The Vols live and breathe.”

Sadly, the same cannot be said for South Carolina … which lost another critical “swing” game on its brutal 2019 schedule.

Jennings caught seven passes for a career-high 174 yards and a touchdown against the Gamecocks – who entered Neyland Stadium as 4.5-point favorites over the hapless home team. He wasn’t alone in helping the Volunteers pull off the upset. Senior wideout Marquez Calloway (above) had a huge night, too, catching three passes for 102 yards and a score. Calloway also had a pivotal 65-yard punt return that opened the scoring in a seesaw second quarter.

Most of the Vols’ aerial bombardment came courtesy of embattled junior quarterback Jarrett Guarantano, who completed 11 of 19 passes for 229 yards and a pair of touchdown strikes. When Guarantano was knocked out of the game in the second half, redshirt freshman J.T. Shrout took over and was every bit as effective, completing seven of 11 throws for 122 yards and a score.

Guarantano broke his wrist and will undergo surgery on his non-throwing hand.

South Carolina had every opportunity to put the Vols away after Tennessee missed a field goal on its opening drive of the second half. Unfortunately, critical penalties – three false starts and a delay of game – on the Gamecocks’ first two drives of the second half helped sabotage their momentum. After going three-and-out on their first two second half possessions (losing a combined sixteen yards in the process), Tennessee responded with a pair of touchdowns to take a 31-21 lead.

Tennessee upped its lead to 34-21 early in the fourth quarter and then put the final nail in South Carolina’s coffin when senior linebacker Daniel Bituli blocked a Joseph Charlton punt and recovered the loose ball in the end zone for six points.

In addition to his blocked punt and recovery for touchdown, Bituli led the Volunteers with 15 total tackles – including one for a loss. Senior linebacker Darrell Taylor also came up huge for Tennessee, recording a pair of sacks and breaking up a pass on an attempted fourth down conversion by South Carolina.

Taylor’s pass breakup came as South Carolina was attempting to convert a fourth-and-two from the Tennessee 35-yard-line with 2:15 seconds remaining in the third quarter.

The Gamecocks went 2-for-5 on fourth down attempts in this game, but their biggest problem was ongoing futility on third down. South Carolina converted only four of 18 third down attempts against the Vols – and now rank next-to-last in the SEC and No. 118 in the nation (out of 130 Football Bowl Subdivision programs) in this critical metric.

One bright spot in the carnage on Rocky Top? Shi Smith.

The 5-foot-10, 190-pound junior from Union, S.C. caught 11 passes for 156 yards – both career records. Smith started the game with a bang, hauling in a crossing route from quarterback Ryan Hilinski and turning on the gas for a 75-yard touchdown reception on the Gamecocks’ first play from scrimmage.

The 6-foot-3, 215-pound senior from Conway, S.C. set a new school record by hauling in his 208th career reception just before halftime – breaking the record set in 2008 by the late Kenny McKinley. While no such moment could ever be classified as mundane, Edwards made sure Gamecock fans would never forget it by making arguably the greatest catch in program history – a leaping one-handed grab over Volunteers defensive back Kenneth George Jr. as he was sailing out of bounds near the checkerboard end zone.

Edwards’ catch was initially ruled a touchdown, but replays showed him landing inbounds just shy of the goal line – leading to a reversal of the call on the field. Two plays later, though, South Carolina found pay dirt on a one-yard touchdown run by senior transfer tailback Tavian Feaster – who amassed 80 yards on 19 carries.

Here is another look at Edwards’ sensational, record-breaking grab …

Edwards caught eight passes for 83 yards on Saturday, which moved him past McKinley into second place on the Gamecocks’ all-time receiving yardage list. With four games to play, he needs 227 yards to break the school mark of 3,042 career receiving yards set by Alshon Jeffrey from 2009-11.

South Carolina heads back home to Williams-Brice stadium next week to take on the Vanderbilt Commodores (2-5, 1-4 SEC) – who had Saturday off after their upset win over then-No. 22 Missouri. Kickoff is scheduled for 7:30 p.m. EDT with the SEC Network providing national coverage.

Again, South Carolina must win three of its remaining four contests to qualify for a bowl bid this year …

Can they do it? Vote in our poll and post your thoughts in our always lively comments section below …

Will South Carolina qualify for a bowl game this season?

Nike Dives Into The Culture Wars