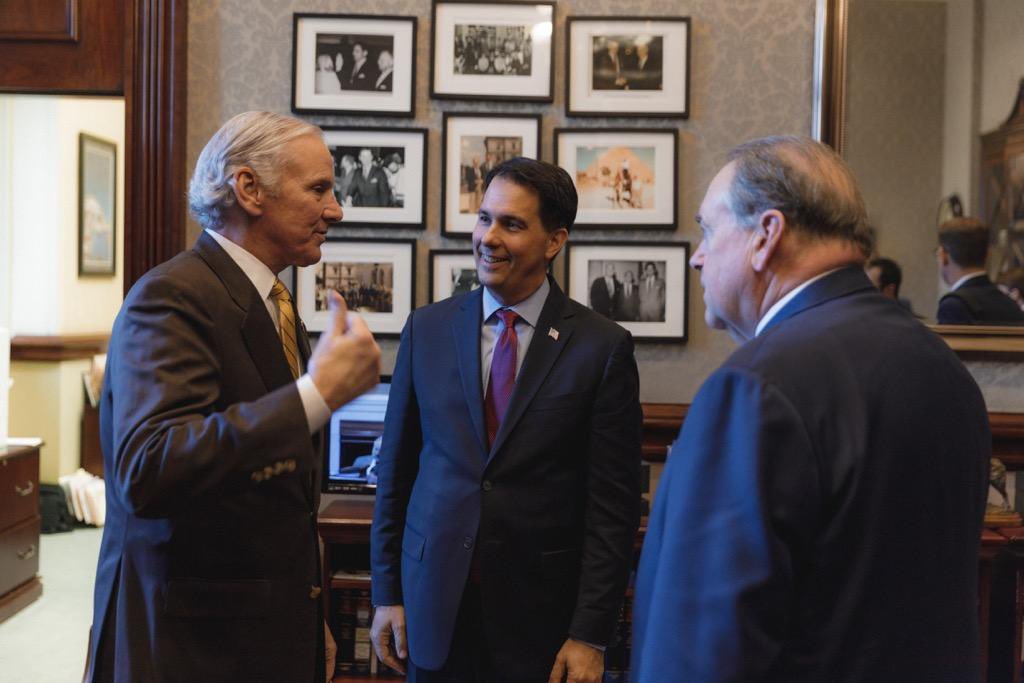 Two former Republican presidential candidates descended upon the South Carolina State House this week to lobby in support of convention of states legislation – although it was not immediately clear which particular bill they supported.

Mike Huckabee and Scott Walker’s visit to Columbia, S.C. – with former SCGOP chairman Chad Connelly in tow – seemed to be geared toward building support for a convention of states push tied to a so-called “balanced budget amendment.”

That bill (S. 125) was pre-filed in December of 2018 by S.C. Senate majority leader Shane Massey – although it has not advanced beyond the subcommittee level and has drawn only nine sponsors.

Two other convention of states bills tied to term limits and “fiscal restraints” on the federal government (H. 3125 and S. 112) have drawn significantly more support in the S.C. General Assembly – along with the backing of both the Republican and Libertarian parties.

For those of you unhip to civics, Article V is the section of the U.S. Constitution which deals with amending our nation’s founding document.  An “Article V Convention” is one of two methods by which changes to the Constitution can be proposed.  The other method is a two-thirds vote of the U.S. House and Senate.

All of these amendments were proposed by a two-thirds vote of the U.S. Congress, however for an amendment to be ratified – irrespective of its origin – it must be approved by three-fourths of all states.

Article V supporters – including the Convention of States Action group – are hoping to change that.

Meanwhile, critics of Article V legislation – including S.C. governor Henry McMaster – oppose the idea, arguing there is no way to control the issues a constitutional convention might address. McMaster and others have raised the specter that such a gathering could conceivably deprive Americans of their Second Amendment right to bear arms, among other essential liberties.

We have emphatically rebuked these concerns …

What makes this issue of particular interest to us? Activists are all over the map on it (see here and here) …

Where are Huckabee and Walker on the issue? Both former governors appear on a South Carolina-based website touting the balanced budget amendment, however Huckabee is also a supporter of the term limits/ fiscal restraints amendment.

Which one has the best chance of passing? Good question …

Opponents of the balanced budget amendment say inconsistent wording of its various state proposals will doom its chance of ever attaining the required 34.

More practically, there is concern among conservative activists that fiscally liberal politicians in Washington, D.C. – including Republicans – would achieve “balanced” budgets by raising taxes, borrowing more money or imposing new unfunded mandates on states. Which of course would defeat the ostensible purpose.

“Even if Congress did have the political fortitude to tighten its own belt, a balanced-budget amendment could not rescue the nation from the looming fiscal crisis,” former U.S. senator Tom Coburn wrote in an April 2018 column published on Real Clear Politics.

We support balanced budgets on principle, but they must be accompanied by long-overdue, draconian reductions in the size and scope of the federal behemoth. Oh and they must provide net tax relief … and debt neutrality.

As for term limits, we can see that issue gaining more traction – even though it is not something this news outlet still supports.

“Populist bloviation,” we recently wrote in reference to the issue.

Having said that, even if term limits are anti-democratic (not to mention easily exploitable by hypocritical career politicians), we would not object to a convention of states being held to address that issue – or any issue, honestly.

What do you think of this issue? Vote in our poll and post your thoughts in our always entertaining comments section below …

Do you support calling a convention of states?