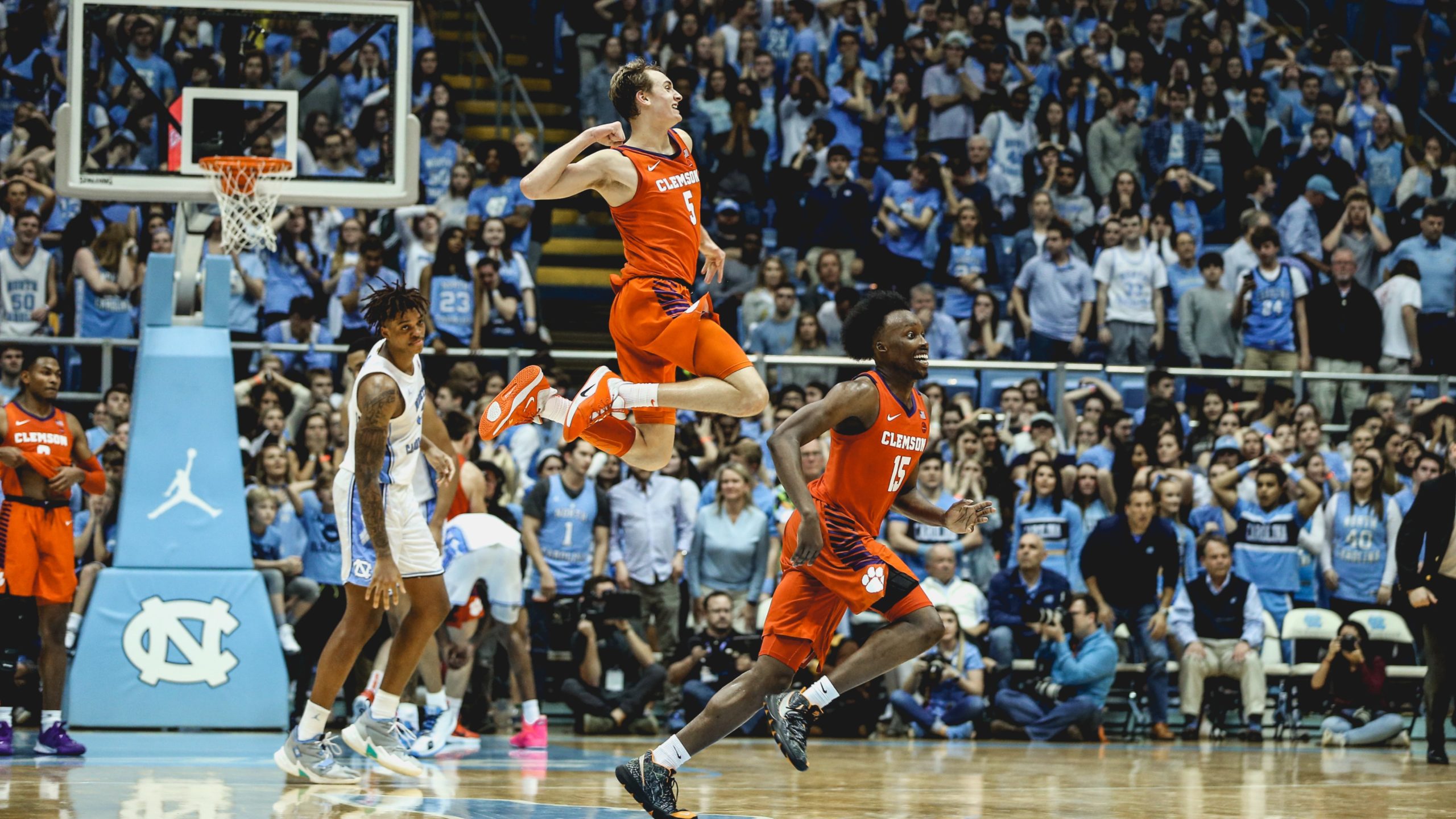 There are a lot of ridiculous statistics in sports. Statistics searching for relevance. Like the other day … when Los Angeles Lakers star LeBron James became the first National Basketball Association (NBA) player since Shaquille O’Neal to record at least 35 points, 15 rebounds and five assists in a single game.

In a desperate-for-meaning culture, one in which everything gets called “epic,” is anything really earth-shattering? In a starved-for-significance society … one in which statisticians scour spreadsheets and algorithms in search of some new combination of metric for SportsCenter anchors to bestow the label “first” upon (or in James’ case, “second” upon), is anything really historic?

On Saturday night at the Dean E. Smith Center in Chapel Hill, North Carolina, Clemson University’s men’s basketball team defeated the North Carolina Tar Heels 79-76 in overtime to capture the program’s first-ever road win in this series (which dates all the way back to the 1925-1926 season).

That’s right. Prior to Saturday night, Clemson had never beaten North Carolina on its home court. Ever.

Literally not once … and no, we are not talking “since …” Because this was no “since …” statistic. No “turn of the century” or “in the new millennium” thing.

This was a from the moment the big bang uncorked this cosmic existence all of us share-type losing streak.

Or at least it was …

In Chapel Hill? The Tigers were 0-59 against the Heels – which was the longest home winning streak by one team over another ever (there’s that word again).

Breaking that streak isn’t a statistic in search of meaning. We are talking cosmic significance, people …

Powered by junior forward Aamir Simms’ team-high 20 points (which were accompanied by eight rebounds, six assists, four blocks and three steals), the Tigers – who never led during regulation – clawed back from a 68-58 deficit with only 2:08 remaining on the clock to force overtime.

During their remarkable 12-2 run to close out the second half, Clemson forced three turnovers on defense while Simms scored nine of his 20 points – including a game-tying three-pointer with only 12 seconds remaining.

In overtime, Clemson built on its momentum … and then held on for the historic victory as Tar Heels’ senior guard Brandon Robinson clanked a three pointer off the right side of the rim as time expired. Seconds earlier, junior forward Garrison Brooks saw his own potential game-tying three-pointer brick off the back of the iron.

“We’re certainly glad that it’s over,” Clemson head coach Brad Brownell told reporters after the game. “To change the narrative is a good thing. You’ve got to be really proud of this team for the way they fought, didn’t give in and made big shots and big plays.”

Clemson is now 8-7 (2-3 ACC) in its tenth season under Brownell – who was nearly fired three years ago (but who has since guided the Tigers to back-to-back twenty-win seasons).

Clemson had come close to breaking “the streak” before. On February 11, 2008 the Tigers – then coached by Oliver Purnell – led North Carolina by fifteen points midway through the second half in their 53rd road game in Chapel Hill.  Led by Tyler Hansbrough, the Heels mounted a furious comeback and ultimately won the game 103-93 in double overtime.

That victory broke the NCAA mark of 52 straight home victories by one team over another, set by Princeton over Brown between 1929 and 2002.

On January 9, 1975 Clemson – then coached by Tates Locke – led North Carolina 72-71 with just eighteen seconds left on the clock.  That’s when future National Basketball Association (NBA) star Walter Davis hit a jump shot to give the Heels the victory.

While Clemson was ebullient in victory, North Carolina – which fell to 8-8 on the year – was inconsolable in defeat.

Head coach Roy Williams – who has led the Tar Heels to three national championships during his 17 years in Chapel Hill – said the loss was the low point of his career and called on North Carolina athletics director Bubba Cunningham to fire him.

“I’ve had some great moments as a coach,” Williams said after the game, per reporter Luke DeCock of The (Raleigh, N.C.) News and Observer. “Right now, this is my lowest one. Losing this game is my fault. If I die tomorrow or twenty years from now, that’ll be my biggest regret as a coach. These kids really needed a win.”

Williams specifically faulted himself for failing to tell his players to foul Clemson with the Tar Heels enjoying a three-point lead.

That would have forced Clemson to the free throw line, instead of allowing them to attempt – and connect – on a game-tying three-point basket.

“I’d tell Bubba he should probably fire me and it probably wouldn’t be a bad idea,” Williams said. “The coach is supposed to help his kids, and I didn’t help them very much.”