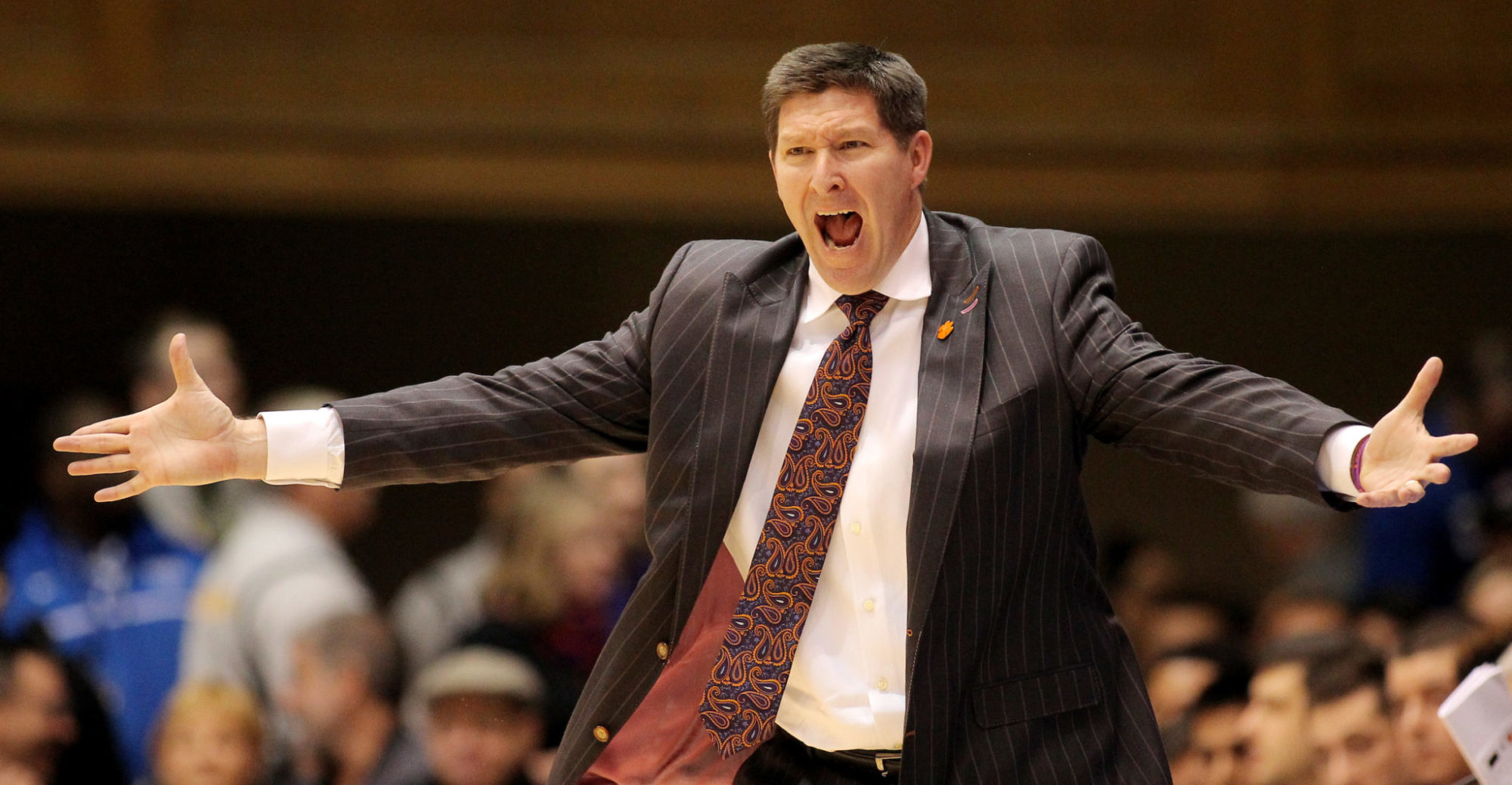 Somehow, Brownell appears to have come out of that confab with his job … for now.

Brownell’s team defined the term “choke artists” (and revived the term #Clemsoning) with multiple close losses last season.  On the one hand that’s not necessarily a bad thing.  It shows that but for a handful of buckets (seven of Clemson’s fourteen losses last season were by four or fewer points – and five of those losses were by two or fewer points), the Tigers would have probably wound up with a No. 3 or No. 4 seed in the NCAA Tournament.

Those baskets didn’t fall, though, leaving Clemson (17-16, 6-12 ACC) in the NIT.  There, they were bounced at home by Oakland in the opening round – coughing up a seemingly insurmountable 20-point lead in the second half.

Seriously … how was that not enough to seal Brownell’s fate?

Brownell’s team was 11-2 heading into a much anticipated showdown with North Carolina on January 3.  They lost that game in overtime (and Brownell lost his cool after the game).

Clemson fans had no way of knowing it at the time but their season was over at that point.  The Tigers would finish the second half of the year with an abysmal 6-13 mark – leading to a cacophony of calls for Brownell’s head.

Radakovich didn’t give it to them, though.

“I want to see Brad succeed here,” he told The Clemson Insider prior to his end-of-season meeting with the coach.

Can Brownell succeed at Clemson, though?

If you want Clemson Basketball to be great—fire him immediately and don’t think twice.

If you want Clemson Basketball to be good and make a run in the tourney every 3-4 years—you fire him ultimately and hate the fact that you ran off a good guy. But you quickly find solace in the reality that you gave him a real chance to make it work and 7 years.

If you want Clemson Basketball to be just average—you keep him another year and are fine with it because you only care about football anyway.

In the end, the only argument for keeping Brownell another year if you want Clemson Basketball to progress is the money you spend on the buyout.

For those of you keeping score at home, Brownell has three years remaining on his contract – which was renegotiated in 2014.  Clemson would owe him $3.5 million if he were fired now – but the school would own him $3 million if it chose to fire him after next season.

Brownell is 124-103 in seven years in Tigertown – with a 56-66 mark against Atlantic Coast Conference (ACC) opponents.  His team (well, former head coach Oliver Purnell‘s team) made the NCAA Tournament during Brownell’s first season at the helm in 2010-11 – winning a “First Four” game over the University of Alabama-Birmingham before falling in the round of 64 to West Virginia.

Clemson hasn’t been back to the tournament since … nor do they appear poised to do so anytime soon (the Tigers are losing leading scorer Jaron Blossomgame and offensive floor leader Avry Holmes from this year’s squad).