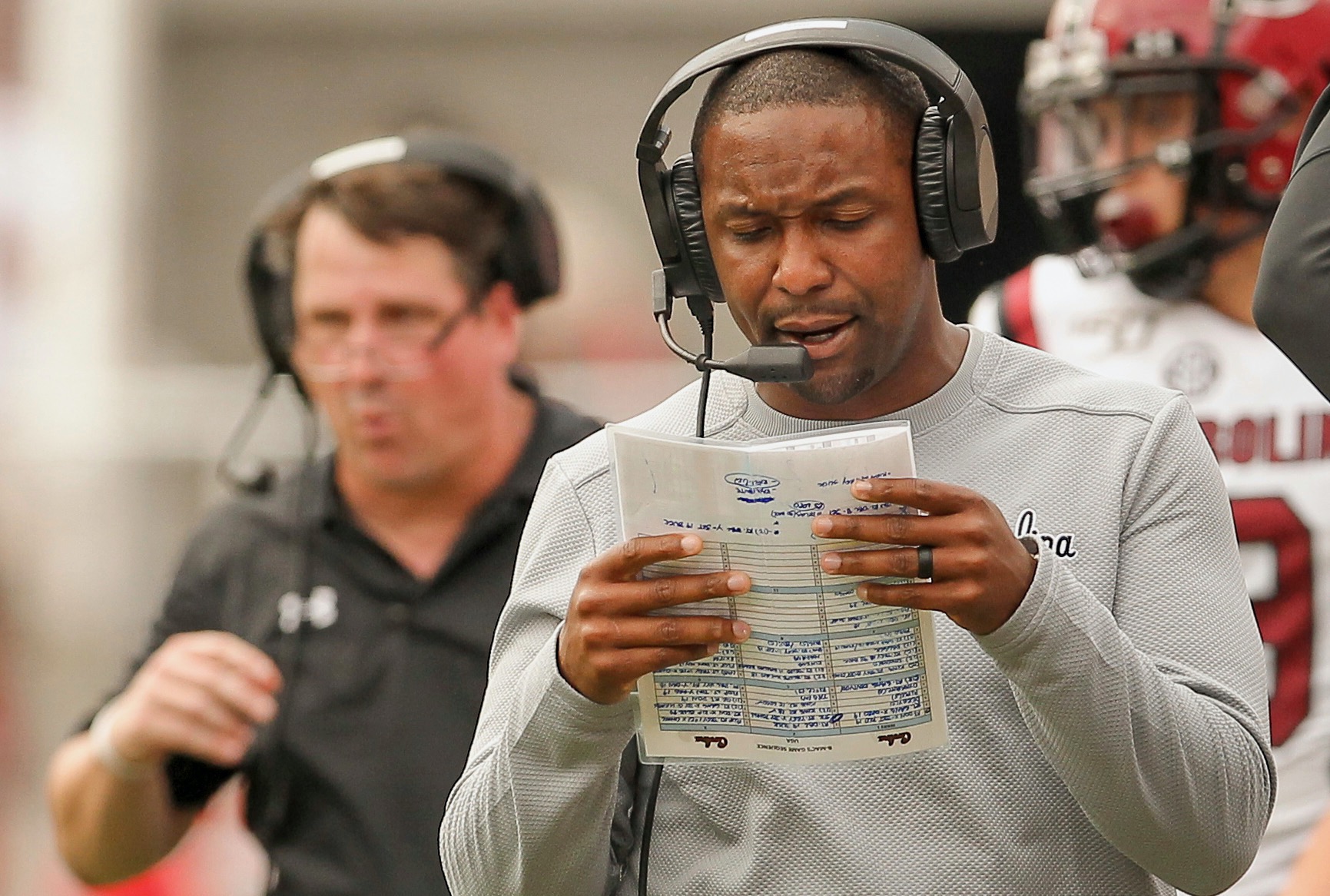 The University of South Carolina football team has reportedly demoted second-year offensive coordinator Bryan McClendon after a disappointing season that saw the Gamecocks suffer a debilitating regression on a host of critical metrics.

There has been no official word yet from the university’s athletics department, but multiple sources who follow the program are reporting that McClendon will not coordinate the offense for head coach Will Muschamp in 2020.

One source – F. Keith Allsep of the “Locked On The Gamecocks” podcast – indicated McClendon had been demoted to wide receivers coach, the post he held from 2016-2017 on Muschamp’s staff. Allsep previously tweeted that McClendon had been fired – but later claimed the 35-year-old Chicago native was “being given time to find a new employer out of respect.”

Other tweets claiming McClendon had been fired were quickly deleted.

Rumors are swirling about other South Carolina offensive coaches, too … which is understandable considering the Gamecocks find themselves unable to fire Muschamp due to the massive buyout contained in his contract.

According to reporter Ben Breiner of The (Columbia, S.C.) State newspaper, quarterbacks coach Dan Werner and strength and conditioning coach Jeff Dillman were relieved of their duties in connection with the rumored McClendon demotion.

McClendon was rewarded for these improvements, too. The former assistant head coach/ recruiting coordinator at Georgia saw his salary balloon from $650,000 to $1 million per year last December – only to turn around and watch as the Gamecocks laid a goose egg against Virginia in the 2018 Belk Bowl.

South Carolina’s offense completely fell apart in 2019 – scoring only 22.4 points per game (No. 104 nationally) and averaging only 370 yards per game (No. 96 nationally). The Gamecocks (4-8, 3-5 SEC) saw things completely unravel over the final three games of the season – scoring just one touchdown over their final twelve quarters of play. Ironically, that touchdown came on a fourth down conversion against Appalachian State after a penalty knocked the offense out of field goal range.

South Carolina also coughed up fourth quarter leads against North Carolina and Florida, and was shut out in the second half after taking a 21-17 lead into the locker room against Tennessee.

The biggest problem for McClendon’s unit? A failure to convert on third down. South Carolina made good on only 59 of 184 third down attempts this season – an anemic 32.1 percent conversion rate that ranked tenth-worst in the entire nation.

McClendon tried to mix things up, moving from the sidelines to the press box midway through the season … but nothing worked.

In fairness to the South Carolina offensive staff, it was hamstrung with numerous injuries – none bigger than the loss of starting quarterback Jake Bentley on the final play of the season opener on August 31. Senior wideout Bryan Edwards – the school’s all-time leading receiver – also missed the final two games against Texas A&M and Clemson with a knee injury. Graduate tailback Tavian Feaster missed the Appalachian State and Texas A&M games with a hamstring injury.

Still, Muschamp claimed this was his deepest, most talented team in four years at South Carolina … which clearly either wasn’t true or his staff didn’t do its job.

Clearly a reshuffling of that staff is in order … and may, in fact, already be underway.

More to the point, Muschamp (above) is accountable for his staff … in good times and bad times.

“This is the biggest decision Muschamp will make as South Carolina’s head coach,” we noted two years ago upon the occasion of Roper’s firing. “It will, quite simply, determine whether the Gamecocks can duplicate/ surpass the success they enjoyed from 2010-2013 under former head coach Steve Spurrier.”

“If the Gamecocks can get their offense on track, they should have no trouble returning to national prominence,” we noted. “If not, expect this year’s 8-4 record to be the high-water mark of the Muschamp era.”

Don’t call us prophets yet, people …

Frankly, we believe much more fundamental change is in order … starting with the university trustees and athletics director (Ray Tanner) who negotiated Muschamp’s contract.