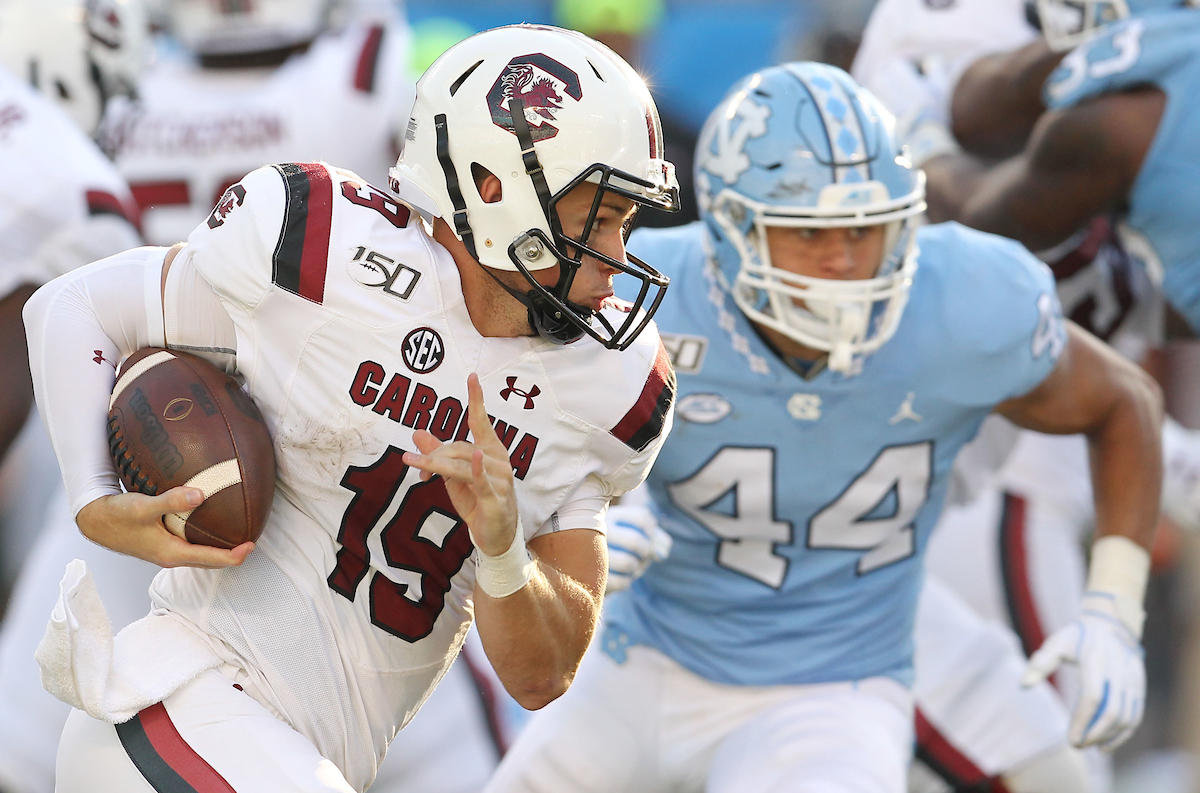 Specific enough for you?

According to radio host Heath Cline, Bentley will “miss some time” with the undisclosed injury. Meanwhile, reporter Mike Uva of WACH TV 57 (FOX – Columbia, S.C.) tweeted on Monday that Bentley would miss up to six weeks – or half of the 2019 season – with “a broken foot.”

That diagnosis was confirmed by several other reporters who cover Gamecock football – however there is no official word yet from the school as to what, if anything, might be ailing the senior signal caller.

South Carolina head coach Will Muschamp is scheduled to address the media on Tuesday, September 3 at 12:30 p.m. EDT. An update on Bentley’s status is likely to be the first issue he addresses.

If the reports are true, it would mean true freshman Ryan Hilinski (above) is South Carolina’s new starting quarterback – with redshirt freshman Dakereon Joyner backing him up. Hilinski – a 6-foot-3, 230-pound native of Orange, California – would make his collegiate debut on Saturday against Charleston Southern at Williams-Brice stadium in Columbia, S.C.

After that? He would go up against he toughest schedule in America …

Hilinski amassed 8,102 passing yards and 85 total touchdowns during his career at Orange Lutheran high school. According to 247Sports, he was the No. 2 pro-style quarterback in the class of 2019.

The highest-rated quarterback to sign with South Carolina since Stephen Garcia in 2007, Hilinski enrolled in classes early and participated in spring drills. He completed 24 of 36 throws for 206 yards in the 2019 Garnet and Black spring game.

Bentley (above) endured a disastrous season opener on Saturday in the Gamecocks’ 24-20 loss to North Carolina. He completed only 16 of 30 passes for 142 yards with one touchdown and two costly fourth quarter interceptions.

The 6-foot-4, 220-pound native of Opelika, Alabama did not appear to be injured, however – which has prompted considerable speculation about his condition.

Bentley has started in 33 games for South Carolina, posting a 19-14 record (and a 10-7 mark against Southeastern Conference opponents). A two-time team captain, he entered his senior season ranked second in school history in completion percentage (62.8), third in pass completions (610) and passing touchdowns (54), fourth in passing yards (7,385), pass attempts (972), and touchdowns responsible for (62), and fifth in total offense (7,533).