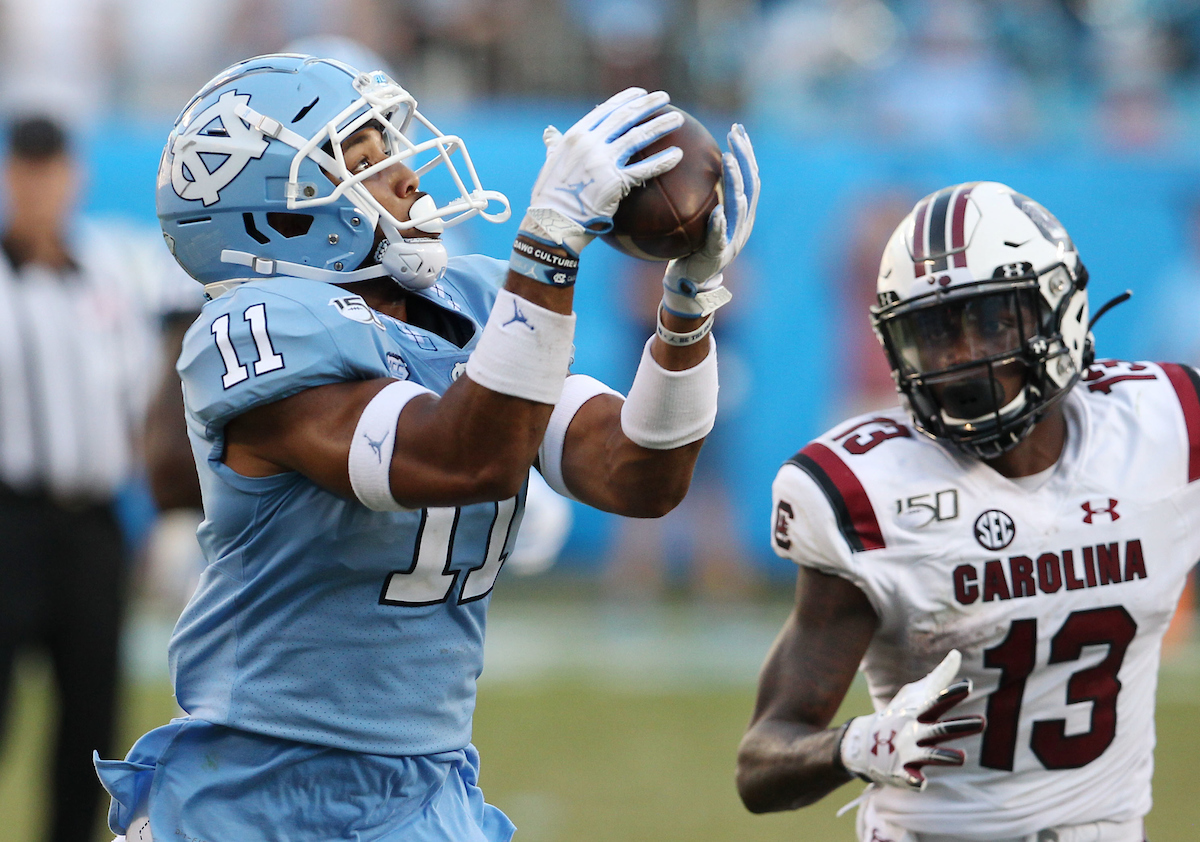 Remember the Rembrandt-level choke artistry the University of South Carolina football team displayed last November during what should have been a season-saving road win against Florida?

Head coach Will Mushcamp’s team did it again to open the 2019 season, falling to North Carolina – a team that went 2-9 a year ago and brought up the rear in the Atlantic Coast Conference (ACC)’s coastal division.

The Gamecocks (0-1, 0-0 SEC) fell 24-20 to the Tar Heels (1-0, 0-0 ACC) at Bank of America stadium in Charlotte, N.C. on Saturday afternoon – coughing up a double-digit lead in the fourth quarter and dropping a game they absolutely had to have as the team stares down arguably the toughest schedule in America.

Even if South Carolina (which entered this contest as a ten-point favorite) had managed to pull this game out, it would have been ugly …

And fans would have been left with more questions than answers …

As it stands now, we wonder whether Muschamp (above) will even make through his fourth season in Columbia, S.C. after flaming out spectacularly during his four seasons as the Gators’ head coach from 2010-2014.

Because let’s be honest: If Muschamp wasn’t on the hot seat heading into this game … he is now.

The 48-year-old’s saving graces? That South Carolina athletics director Ray Tanner is even more results-averse than he is … and the school’s newly elected president Robert Caslen is under siege and probably too busy dousing the flames of his own dumpster fire to pay much attention to the conflagration enveloping Williams-Brice stadium.

Speaking of dumpster fires: How about senior quarterback Jake Bentley? The 6-foot-4, 220-pound native of Opelika, Alabama closed out 2018 with one of his worst games ever – yet somehow managed to lower the bar even further in his first start of the 2019 campaign. In addition to getting sacked three times, Bentley threw a pair of interceptions on the Gamecocks’ final two possessions to seal the deflating loss.

Bentley (above) finished the game with a positively hideous stat line: 16 of 30 passing for 142 yards with one touchdown and the aforementioned two picks, both of which landed into the arms of Tar Heel defensive back Myles Wolfolk.

Seriously, Wolfolk was probably the leading receiver for Bentley on the evening … the only problem is he was playing for the wrong Carolina.

Except no … the Tar Heels are actually the “right Carolina” in football now (and everything else, honestly), winning for the first time in four tries since this rivalry was renewed in 2007 after a sixteen-year hiatus.

Making his 33rd career start, Bentley was thoroughly outplayed by true freshman Sam Howell of Monroe, N.C. – who was making his first start under new Tar Heels’ head coach Mack Brown (who emerged victorious in an emotional return to the sidelines of a team he coached from 1988-1997).

Actually, Howell was the first true freshman in North Carolina history to start a season opener – completing 15 of 24 passes for 245 yards with a pair of touchdowns and no interceptions.

Not bad for a guy who hadn’t even been born the last time Brown was coaching the Tar Heels.

Unlike Bentley, Howell (above) was at his best when the game was on the line – throwing scoring strikes on back-to-back drives in the final stanza after Brown and his staff limited him via conservative play-calling through the first three quarters of the game.

One of those fourth quarter scoring drives covered 95 yards. The other went for 98 yards.

The Gamecocks held a 20-9 lead (and had possession of the football at midfield with four minutes left in the third quarter). At that moment, ESPN’s win probability predictor gave Muschamp’s team a 94.8 percent chance of victory.

It was not to be, though … despite some impressive individual performances.

Running back Tavien Feaster – a transfer from Clemson University – ran for 72 yards on 13 carries in his first action as a Gamecock. Feaster also scored his first touchdown – and South Carolina’s first touchdown of the season – on a 34-yard jaunt in the first quarter. Senior Rico Dowdle also looked good in limited action, picking up 62 yards on 11 carries.

The Gamecocks also had a great day on special teams, with junior wide receiver Shi Smith returning three kickoffs for 100 yards (including a 60-yard return in the third quarter that set up a South Carolina touchdown). Senior wide receiver Bryan Edwards also had an excellent day returning punts, amassing 66 yards on three returns including a 38-yarder that set the Gamecock offense up in excellent position prior to Bentley’s second interception.

Up next for South Carolina? The team’s home opener against Charleston Southern, which is currently scheduled for a 12:00 p.m. EDT kickoff. The Buccaneers lost their season opener on Saturday, too, falling 46-13 to Furman.

Can the University of South Carolina salvage its 2019 football season?