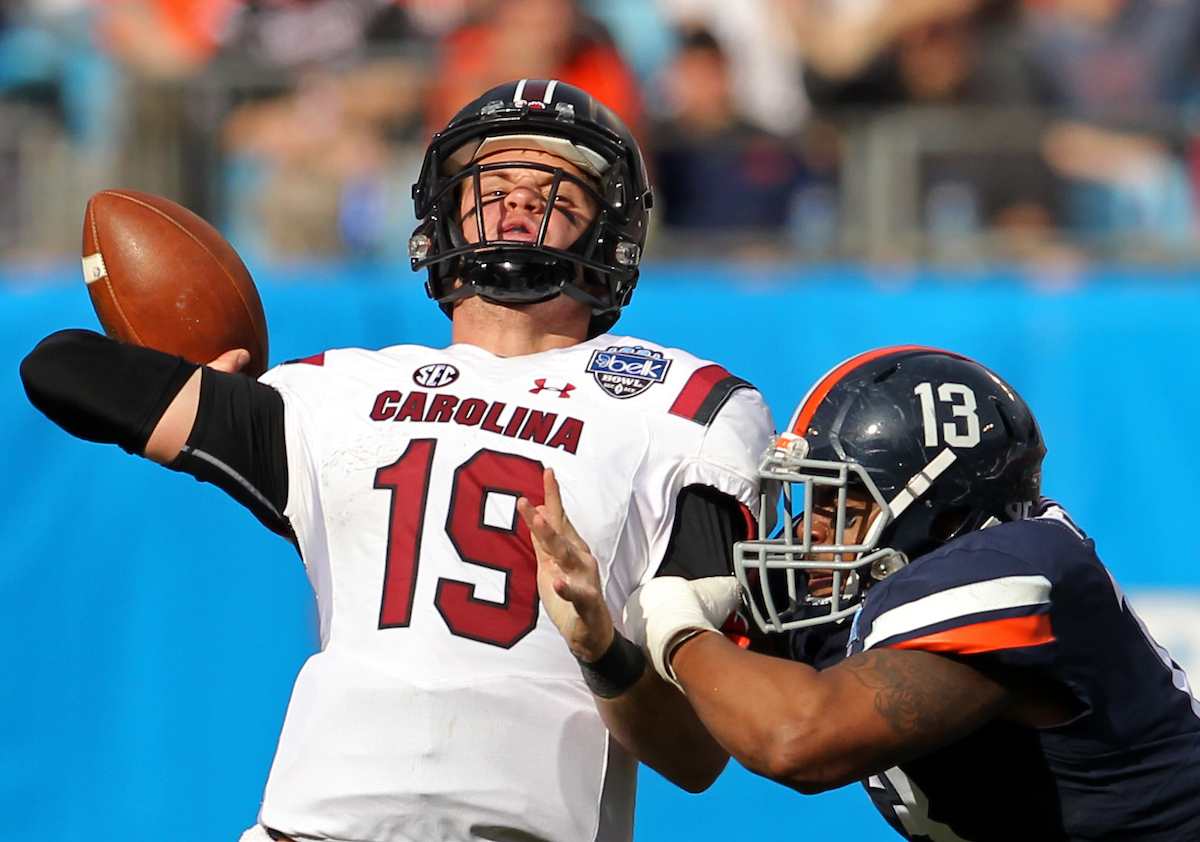 The University of South Carolina football program is eager to exorcise a number of demons following a disappointing 2018 season – one punctuated by a humiliating shutout loss in a bowl game that was honestly an embarrassment before it even began.

Seriously … the Belk Bowl? Not since getting bested by Connecticut in a bowl game named for a pizza delivery website have the fortunes of Gamecock football stooped so low.

What was the most disappointing part of South Carolina’s 2018 campaign? Amazingly, it wasn’t the choke artistry the Gamecocks exhibited on the road against Florida – snatching defeat from the jaws of what could have been a season-saving victory. Nor was it getting five-bombed … by Kentucky. Nor was it being humiliated by a Georgia team everyone thought would be rebuilding (under a head coach South Carolina should have hired).

No … what was so disappointing about 2018 was that it was supposed to have been a good year. In fact, 2018 was supposed to have been head coach Will Muschamp’s breakthrough season – a year in which the Gamecock program reclaimed the glory days of 2010-2013, when it captured its first (and only) SEC Eastern title and won a school-record eleven games three years in a row.

After a better-than-expected 2017 campaign, things appeared to be moving in that direction. So upbeat was this news outlet last summer that we broke from our habit of criticizing Muschamp – who was athletics director Ray Tanner’s first big hire back in 2015.

“The guy has proven us wrong from day one … and momentum continues to trend in the right direction,” we wrote at the time.

This summer? Not so much …

After 2018’s giant leap backward, Muschamp (above) is now dealing with deflated expectations, declining attendance and diminished success on the recruiting trail – raising the specter of another “four-and-out,” i.e. his fate when he coached at Florida from 2010-2014.

Can he turn it around? We are bearish …

A year ago, we noted that Muschamp was showing “steady improvement in the only metric that matters,” which of course is wins and losses. And he was.

Clearly that momentum has been blunted (reversed, actually) – with little prospect for improvement this year. Given the ferocity of South Carolina’s upcoming schedule – widely regarded as one of the toughest in the nation – wins and losses might not be the best metric to use in assessing the trajectory of the program. With games on tap against No. 1 Clemson, No. 2 Alabama, (at) No. 3 Georgia, No. 8 Florida and (at) No. 11 Texas A&M, the general consensus is that Muschamp starts this year in a guaranteed five-game hole.

In other words, South Carolina must win all of the games it is supposed to win (North Carolina, Charleston Southern, Vanderbilt and Appalachian State) while taking two of the three games that are perceived as toss-ups (Kentucky, Missouri and Tennessee) just to become bowl eligible.

We are going to be brutally honest here: Bowl eligibility this season would be nothing short of a miracle for the Gamecocks.

Obviously, preseason assessments are typically rendered obsolete by the third week of the year (if not sooner), but certain things you can take to the bank. Which brings us to another brutal truth for Gamecock fans: There is a massive talent gap between South Carolina and the five ranked teams it is facing in 2019.

That gap is getting wider, too, as all five of these programs boast 2020 recruiting classes that rank in the top ten nationally, according to 247Sports. By contrast, South Carolina’s recruiting class for next year is ranked No. 21 – underscoring the difficulty Muschamp faces as he seeks to restore the Gamecock program to its former glory.

Simply put: How do you bridge the talent gap when your opponents keep recruiting better talent?

We believe the answer to that question involves the program selecting a new coaching staff (and a new athletics director). Unless, of course, anyone actually believes the Will Muschamp era at South Carolina is going to end any differently than it did in Florida (which has reestablished itself as a national force following Muschamp’s departure). But as we prepare to give the fourth-year coach one more opportunity to prove us wrong in 2019, what are the expectations against which he and his staff should be judged?

What do we believe would constitute a successful season for Gamecock football this year?

While wins and losses obviously matter, we are not expecting much more than a 6-6 record out of Muschamp’s team in 2019. As noted above, if South Carolina manages to make it to a bowl game it will be a miracle. Still, we are not overly concerned about whether this team finishes 5-7, 6-7, 7-6 or (dare we dream?) 8-5 … we are concerned with how the team performs throughout the year.

Does it rise to the challenge? Or shrink from the fight?

Does it stay competitive in its high-profile matchups against Clemson, Alabama, Georgia, Florida and Texas A&M? Or are those games over before halftime – with “loyal” Gamecock fans fleeing for their tailgate tents to drown their sorrows in leftover ribs, brown liquor and snarky tweets.

And what about those toss-up games? Does Muschamp’s team run the table against the three programs it desperately needs to beat? Or does South Carolina get swept in its critical matchups against the Wildcats, (Mizzou) Tigers and Volunteers?

These are the questions we will be following as 2019 unfolds … not just the wins and losses, but whether South Carolina shows up to play each and every week against its unforgiving gauntlet. Because let’s face it: The Gamecocks could go 6-7 or 7-6 and still have a good year if they actually show up to play.

Keeping it close against the nation’s elite programs and winning the toss-up games should be enough to satisfy the Gamecock faithful – who appear to have reverted to their pre-2010 mindset of embracing mediocrity.

Anything short of that, though, and look for Muschamp to be scouring those defensive coordinator job openings come December.