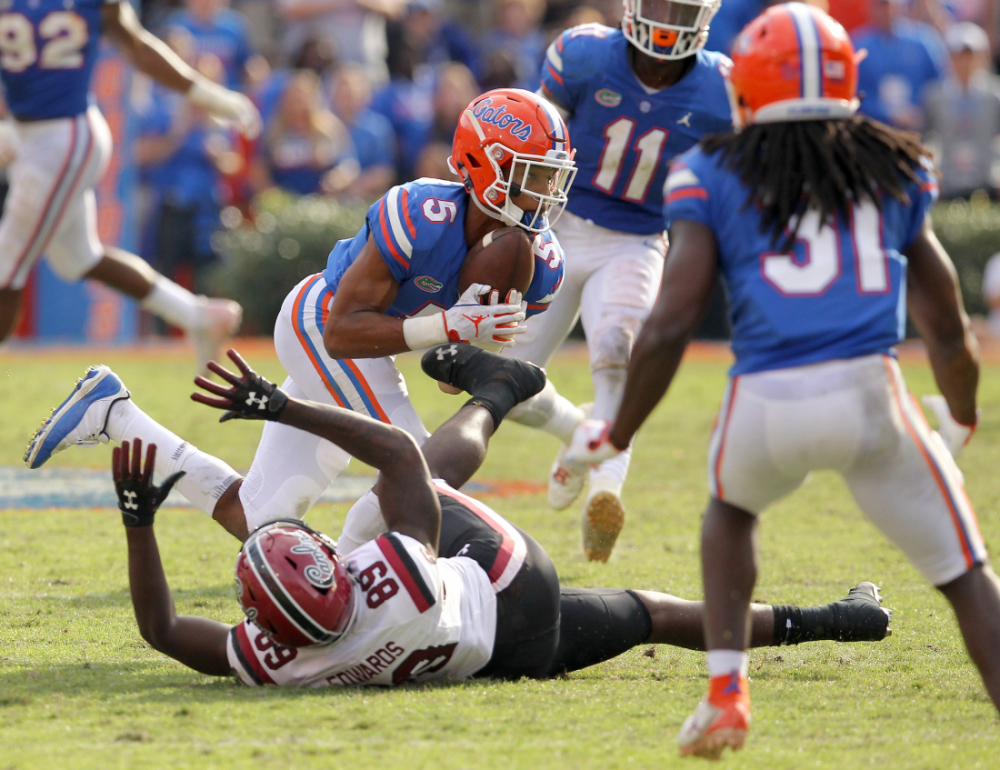 On the verge of what appeared to be a potentially season-saving upset of No. 15 Florida – on the Gators’ home turf, no less – the University of South Carolina football team allowed a key third down conversion on a freak play with just over eighteen minutes left in the game.

Head coach Will Mushcamp’s squad had no way of knowing it at the time, but the bizarre conversion was the beginning of the end for them on a day that seemed destined to end with a signature late-season SEC victory.

Leading 31-14, the Gamecocks had the Gators exactly where they wanted them … facing a third and long from their own thirty-seven yard line.

This already dire situation for Florida took an even more ominous turn when the snap from center on the play sailed over the head of embattled starting quarterback Feleipe Franks – setting off a mad scramble for the football.

Under duress, Franks was able to somehow pick the ball up, escape pressure from pursuing defenders and heave it downfield where – a few ricochets later – it was caught by sophomore wide receiver Trevon Grimes just beyond the first down marker.  As Grimes was being wrestled to the ground, though, the football was stripped out of his arms and recovered by South Carolina. 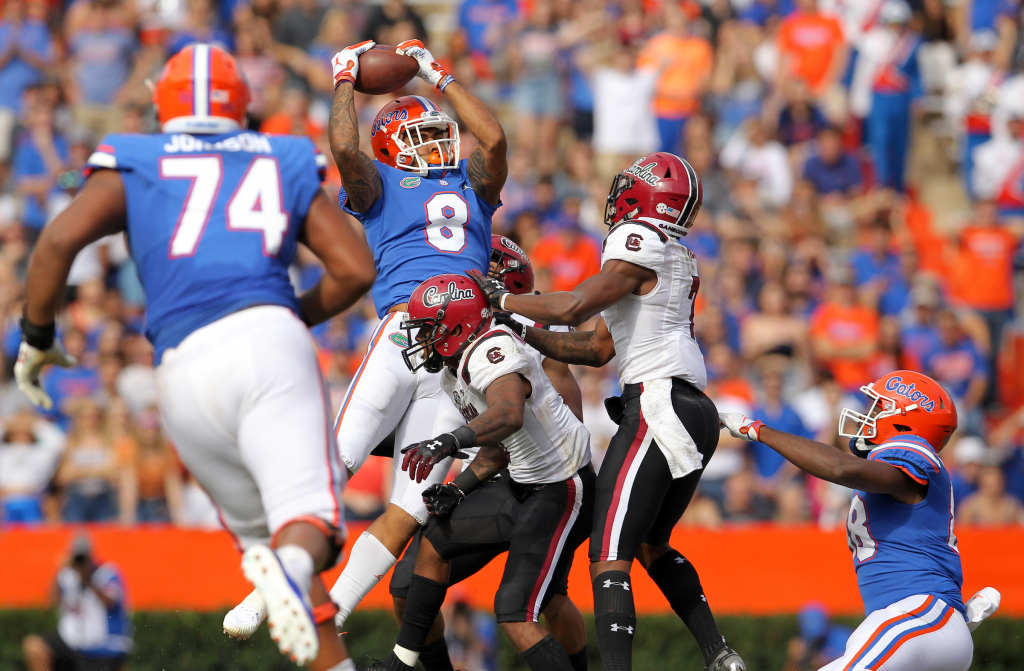 Nope.  Unfortunately for Gamecock fans, Grimes (above) was marked down by officials – and Florida (7-3, 5-3 SEC) was able to snap the football before the replay booth could initiate a review.

Four plays later, Florida was in the end zone – scoring the first of what would wind up being three unanswered touchdowns.  The blitzkrieg turned a potentially program-defining win for the Gamecocks (5-4, 4-4 SEC) into 35-31 season-saving win for first-year head coach Dan Mullen’s team.

With tailbacks Jordan Scarlett (18 carries, 159 yards) and Lamical Perine (16 carries, 107 yards, two touchdowns) leading the way, the Gators gashed the Gamecocks down the stretch – embarking on touchdown drives of 75, 89 and 66 yards in the final twenty minutes of the game.  They took the lead for the first time (and for good) on a one-yard touchdown plunge by Franks with just over four minutes left in the game.

Florida amassed 367 total yards on the ground – putting up another huge number on coordinator Travaris Robinson’s unit, which entered the game ranked No. 12 in the SEC in rushing defense.  And while quarterback Jake Bentley and the South Carolina offense had it rolling early, they sputtered down the stretch – including an interception on what could have been an “answer” drive after Florida seized the lead in the fourth quarter.

Franks scored twice on the ground and ran for 36 yards in addition to completing 15 of 21 passes for 161 yards and a touchdown.  The 6-foot-6, 240-pound signal caller – who has been vilified by the Florida fan base this season – celebrated the game-winning score by putting his finger to his lips, “silencing” Gator fans who had been booing him just moments earlier. 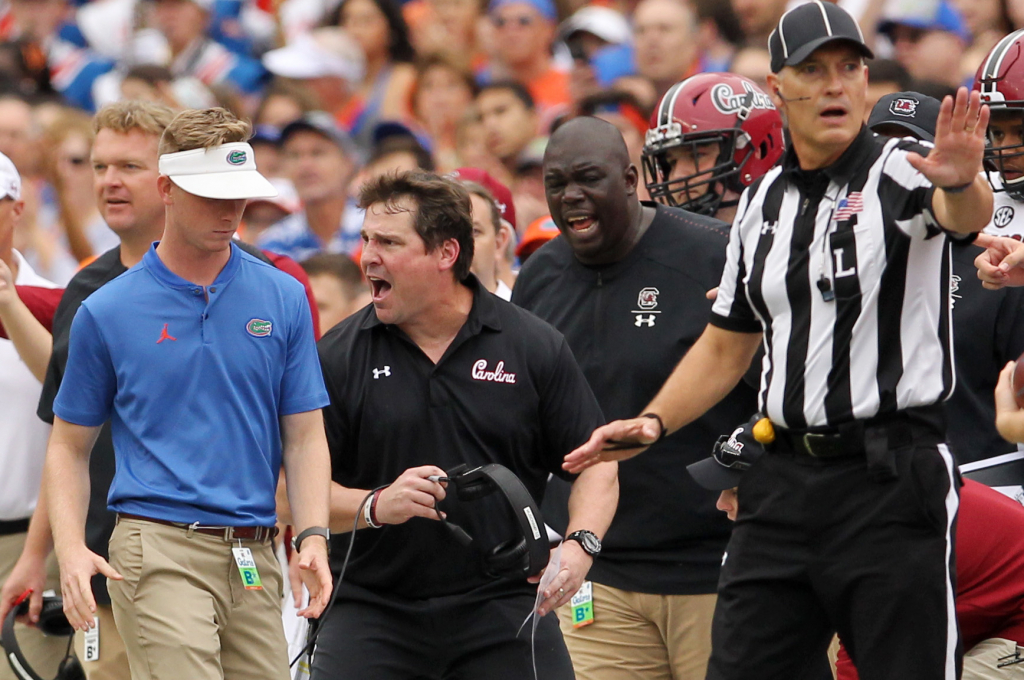 The loss dropped Muschamp (above) to 1-2 against the team he coached from 2011-2014 – and 2-7 in this SEC East rivalry.  It also dropped him to 1-8 in games against ranked teams since taking the reins of the South Carolina program.

Worst of all, it deflated a Gamecock fan base that was expecting big things from this program in 2018.  To say Muschamp’s squad has underwhelmed would be an understatement, but had South Carolina been able to hold on for the upset over Florida it probably would have been an even-money bet to equal last year’s 9-4 mark.

Not to mention wind up back in the national rankings … where they were a fixture for several years under another former Florida coach, Steve Spurrier.

Now, an 8-5 record is likely the best Gamecock fans can hope for given one of their remaining opponents is No. 2 Clemson – which has taken four in a row in this rivalry and has looked absolutely invincible through its first nine games.

The Secular Humanists Are Coming After Clemson Football Again