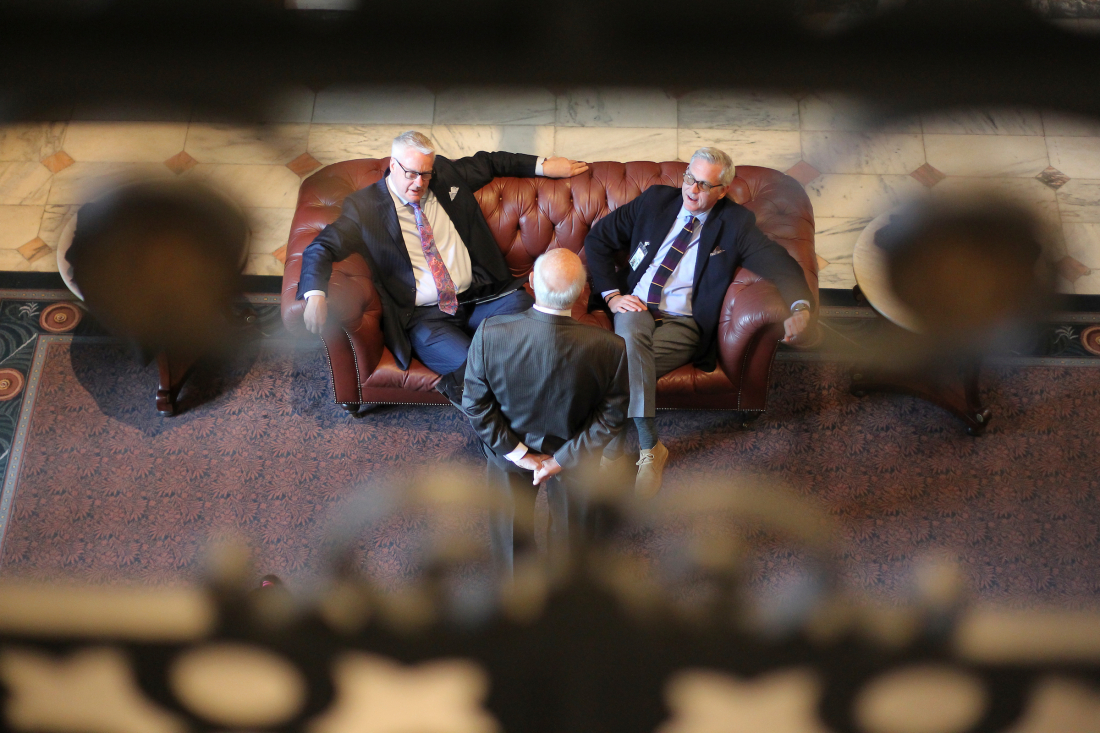 The observation?  That the powerful influence peddling apparatus erected under the nameplate of Richard Quinn and Associates – arguably the most powerful political consulting empire the Palmetto State has ever seen – could be easily duplicated by another firm.

Not only that, these consulting firms often pay these politicians directly – assuming the lobbyist principals aren’t already doing that themselves.

The Quinn’s network – dubbed “The Quinndom” – “could easily be repeated,” grand jurors warned in their report.

Such efforts are already underway, our sources tell us …

The collapse of the Quinndom has created a significant power vacuum within the Palmetto political universe, and multiple players – including erstwhile rivals of the Quinns as well as up-and-coming outfits looking to stake their claims – are rushing to fill the void.  Old scores are being settled, and new alliances are being formed – and the shakeup is occurring while major issues (like the resolution of the #NukeGate debacle) hang in the balance.

In fact, buried within the grand jury report was a fascinating reference to SCANA, one of the utilities at the heart of #NukeGate – a spectacularly failed, multi-billion dollar government-initiated intervention in the nuclear power business.

SCANA was a client of the “Quinndom,” but not all of its executives were happy about this arrangement …

Current SCANA chief operating officer Keller Kissam – who is a key player in an ongoing civil war over the future of this embattled utility – is referenced in the grand jury report as being harshly critical of the firm.

Kissam referred to the Quinndom as “dark money personified” and called Richard Quinn’s political empire a “pack of thieves.”

Why does this matter?  Kissam’s aspirational ascendency to the chief executive officer position at SCANA – which is currently held by Jimmy Addison – is being overtly promoted by S.C. Senate majority leader Shane Massey.

Massey (above) is the golden boy of First Tuesday Strategies, a Columbia, S.C.-based consulting firm poised as one of the successors to the Quinndom.  He is also the politician who singlehandedly torpedoed (for now) the proposed $15 billion sale of SCANA to Virginia-based Dominion Energy.

The only market-based option currently on the table to deal with #NukeGate, Dominion’s proposal would provide an estimated $1.3 billion in immediate cash rebates to ratepayers (an average of $1,000 per residential ratepayer).  It would also absorb $1.7 billion in debt related to the botched V.C. Summer nuclear generating station expansion project – a.k.a. the detonation point for this scandal – while gradually reducing energy bills over the next twenty years.

Not surprisingly, this is a popular plan with ratepayers – particularly due to the up-front relief it contains.

Lawmakers’ alternative proposal promised an estimated $270 million in up-front relief to ratepayers and larger reductions in energy bills over time (at least temporarily).  As this news outlet exclusively reported earlier this year, though, all of the initial ratepayer relief provided by the legislature was also envisioned as part of the Dominion-SCANA deal.  That means South Carolina politicians – who got the state into this mess in the first place – haven’t given beleaguered ratepayers anything they wouldn’t have gotten from the private sector deal.

Also – unlike the Dominion deal – the legislative proposal does not lock in lower rates in perpetuity.  Even more ominously, it has set up a protracted legal battle the state may not be able to win.

Nonetheless, Massey has been aggressively promoting the legislative “solution” – and reflexively trolling Dominion at every turn.

It’s almost as if a tin-foil hat-wearing charter member of the state’s Alien Abduction Club has possessed him.

Things have gotten so bad Palmetto political insiders are speculating as to whether Massey (or his consultants) are working for another power company with designs on the South Carolina #NukeGate fallout.

Want an example of what we are referring to?

Just this week, Junior Achievement of Greater South Carolina tweeted its thanks to Dominion for the company’s “continued support” of the organization, which provides “volunteer-delivered, kindergarten-12th grade programs” intended to “foster work-readiness, entrepreneurship and financial literacy skills.” 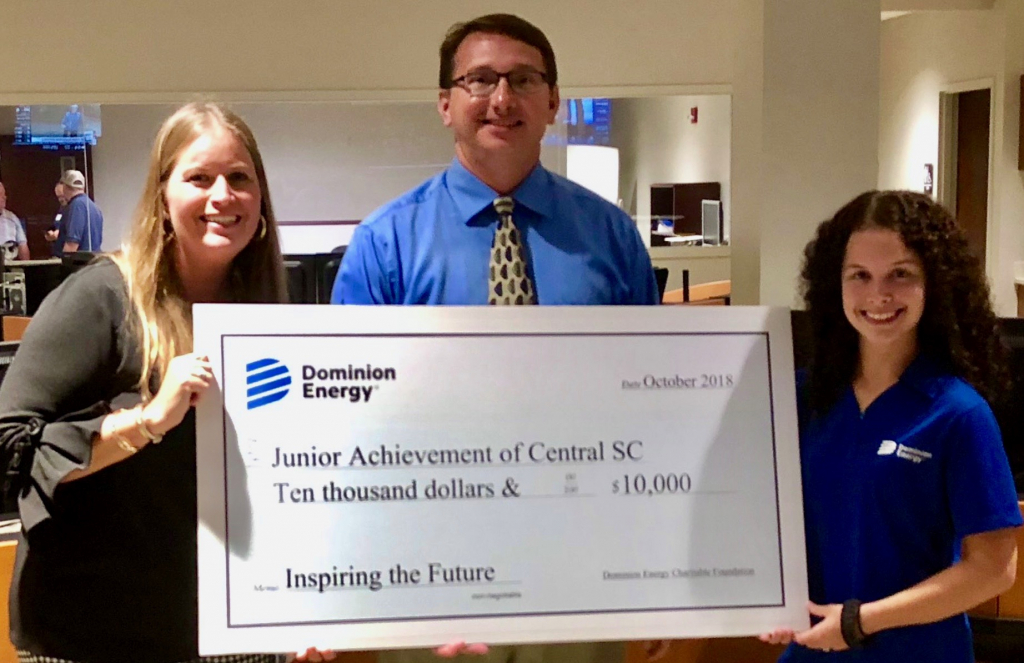 Massey pounced on the announcement, accusing Dominion of “throwing money around to buy good will.”

“Did they help you before their multi-billion deal was on the table?” Massey asked.  “Don’t believe this is about anything other than them trying to use you to make more money.”

Kristen Beckham, Dominion’s southeastern director of external affairs, quickly retorted that her company had been supporting Junior Achievement financially since 2015, when it began operations in the Palmetto State.

“It’s a great organization that we are proud to partner with here in South Carolina, and elsewhere across the many states that we serve,” Beckham tweeted.

The exchange is one of many in which Massey has injected himself into an unrelated conversation for the sole purpose of trashing Dominion … gratuitously.

“(This is) far from organic, civic-minded opposition,” one veteran lobbyist told us in reference to Massey’s crusade.  “Seems like somebody is footing the bill for this.”

A recent television advertisement in a competitive State Senate race hinted that Massey’s Republican caucus is a “slush fund” receiving big dollar secret donations – which it in turn uses to illegally influence elections.  A judge is expected to rule in that case this week.

Another “pack of thieves?”

Massey has insisted all along he is simply pushing for the best deal possible for ratepayers, and we want to believe him.  In fact, if we trusted lawmakers one iota when they told us recent reductions in power bills would be permanent – we would be far more inclined to endorse their deal.

But we don’t trust them.  At all.  And Exhibit A for our complete and total lack of faith in legislative meddling in the energy industry is the $10 billion hole in the ground in Jenkinsville, S.C. for which they bear near-total responsibility.

Luckily for Massey, his close relationships with mainstream media reporters like Avery Wilks of The (Columbia, S.C.) State newspaper and Andy Shain of The (Charleston, S.C.) Post and Courier appear to be insulating him and his political intimates from any scrutiny regarding their advocacy.

In fact Shain – in an odd break from his professed journalistic impartiality – tweeted that Dominion’s donation to Junior Achievement was an example of “when a check is more than a check.”

This news outlet has not endorsed any of the proposals currently on the table related to #NukeGate.  We continue to believe a better deal is out there – one that maximizes the amount of relief available to ratepayers within the confines of what the market will bear and the courts will accept.

As we continue to seek that outcome, though, be on the lookout for a series of pieces in the coming days which will address the myriad of hypotheticals on the horizon as the Dominion deal approaches its “D-Day” – a hearing before the embattled S.C. Public Service Commission (SCPSC).