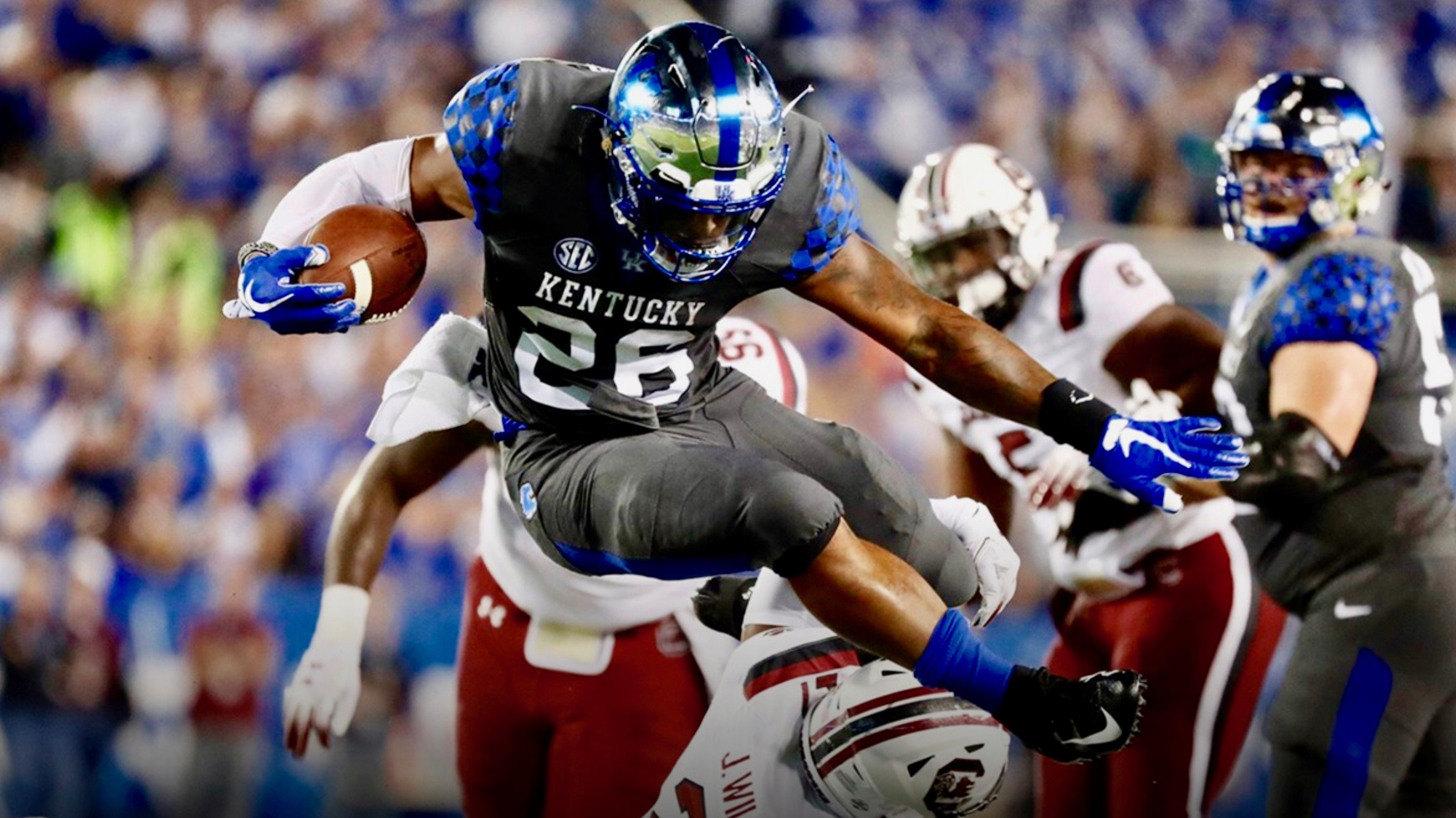 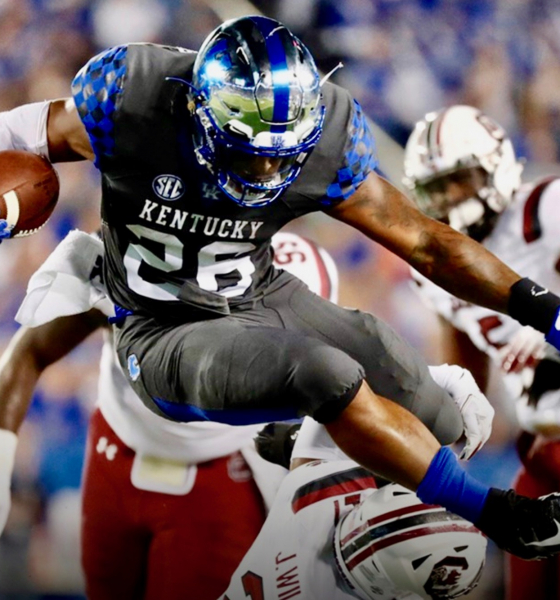 The University of South Carolina football team opened the new millennium with a 13-1 record against the Kentucky Wildcats – the lone blemish being a shocking upset loss during the 2010 season.

Those were the days …

Now it is Kentucky in firm possession of the ownership papers in this SEC East rivalry, winning its fifth straight in this series with a decisive 24-10 victory on Saturday night at Target Field in Lexington, Kentucky.  Ranked in the Top 25 for the first time in nearly a dozen years, the Wildcats (5-0, 3-0 SEC) pummeled their guests from the Palmetto State during a chippy first half – and then sat back and watched as head coach Will Muschamp’s Gamecocks (2-2, 1-2 SEC) beat themselves in the second half.

In years past, Kentucky stole games away from South Carolina.  Not anymore.  Now the undeniable truth is Kentucky is a better program.

Prior to embarking on its current streak, Kentucky had never beaten the Gamecocks more than twice in a row.

And while no one expected Kentucky to be ranked when South Carolina rolled into the Bluegrass State, they were … which means the Gamecocks have now lost eight out of nine games against ranked opponents during the Muschamp era.

Leading the way for the Wildcats?  Brash, bruising, ballerina-pirouetting tailback Benny Snell Jr. – who ran for 99 yards on 24 carries with a touchdown.  Snell didn’t have his best game of the season, but he didn’t need to.  Kentucky was content to run out the clock in the second half as its dominating defense shut down an error-prone Gamecock offense than never found its rhythm – except on one series in the first half when it ran a bizarre formation with only three down linemen in the center of the field (tackles Dennis Daley and Blake Camper lined up as wideouts).

That was the only time coordinator Bryan McClendon’s disjointed up-tempo offense found anything resembling success … and yet they never returned to it.

A big reason for the lethargy?  Quarterback Jake Bentley.   The 6-foot-4, 220-pound junior from Opelika, Alabama had one of the worst games of his career – completing only 13 of 28 passes for 148 yards with one touchdown and three incredibly costly interceptions.  Actually, Bentley should have thrown a fourth interception but a Kentucky defender jumped early on an under-thrown deep ball to wide receiver Deebo Samuel – allowing the speedy wideout to break free for South Carolina’s only touchdown of the game. 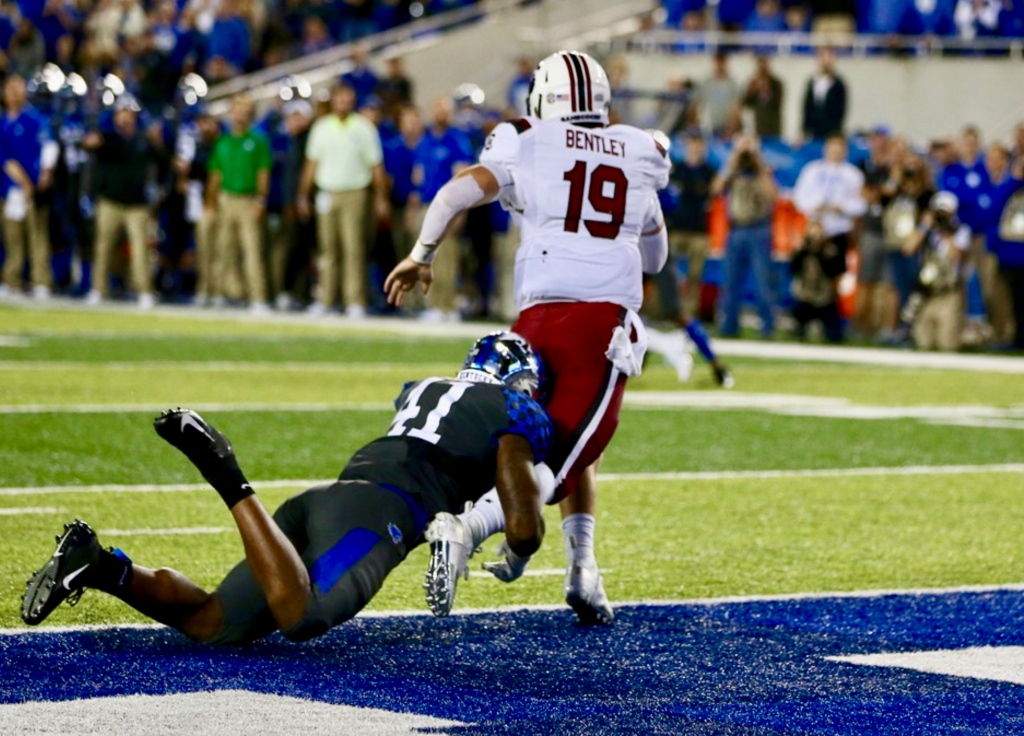 Bentley (above) had plenty of time to throw most of the night … he simply couldn’t find anyone open.  And when he did, he consistently under-threw the football.  Honestly, Bentley only had one truly impressive throw all night – and it was dropped in the fourth quarter by junior wide receiver Bryan Edwards.

In addition to Bentley’s three interceptions, junior running back Rico Dowdle lost a fumble that led to a Kentucky field goal.  Meanwhile, South Carolina was penalized eleven times for 98 yards.  Kentucky actually had more penalty yardage, but the Gamecocks could never make them pay for their mistakes.

Bentley – who slipped to 15-9 as South Carolina’s starting quarterback – injured his right knee late in the game and was replaced by redshirt senior Michael Scarneccia.  Muschamp told reporters after the game he believed Bentley would be back in action next week when the Gamecocks host SEC East rival Missouri in Columbia, S.C.  The Tigers (3-1, 0-1 SEC) were off this weekend.

That game is scheduled to kickoff next Saturday at 12:00 p.m. EDT with the SEC Network providing coverage.

While Kentucky looks to keep the good times rolling next week in College Station against Texas A&M, South Carolina’s season is looking more and more like a shambles as it limps back home for a season-defining three-game conference home stand.

This news outlet remained optimistic three weeks ago when No. 3 Georgia eviscerated South Carolina in Columbia – a game many felt would be competitive.  We are no longer quite so sanguine.  Saturday night’s ugly loss against Kentucky was a clear regression.

Muschamp and his staff staved off a recruiting disaster when he arrived in Columbia in December 2015 – and steadily improved outcomes in 2016 and 2017.  Loaded with young talent, this year’s team was supposed to take another step forward.

Got something you’d like to say in response to one of our stories? Please feel free to submit your own guest column or letter to the editor via-email HERE. Got a tip for us? CLICK HERE. Got a technical question or a glitch to report? CLICK HERE. Want to support what we’re doing? SUBSCRIBE HERE.
Banner: Kentucky Football