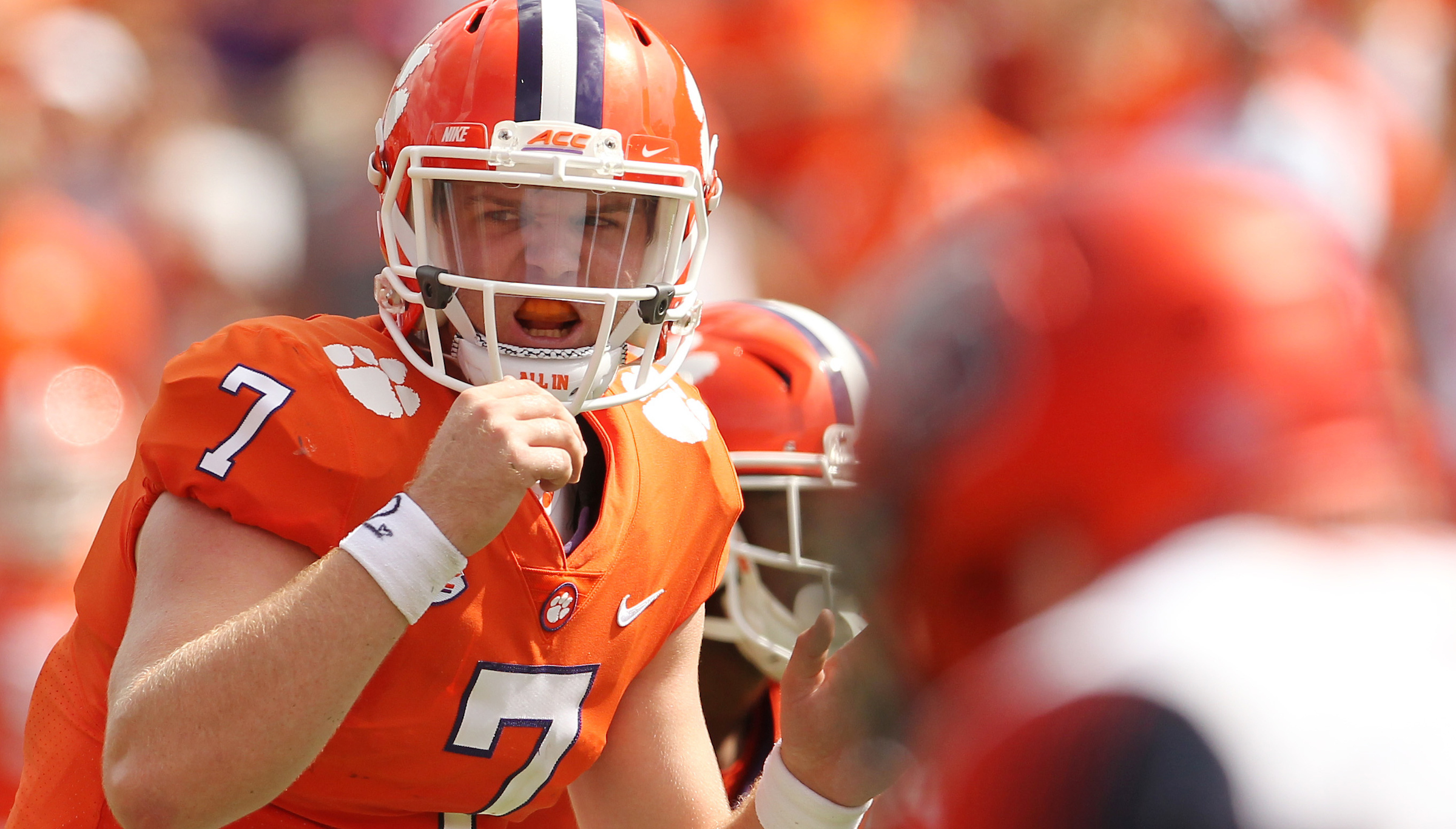 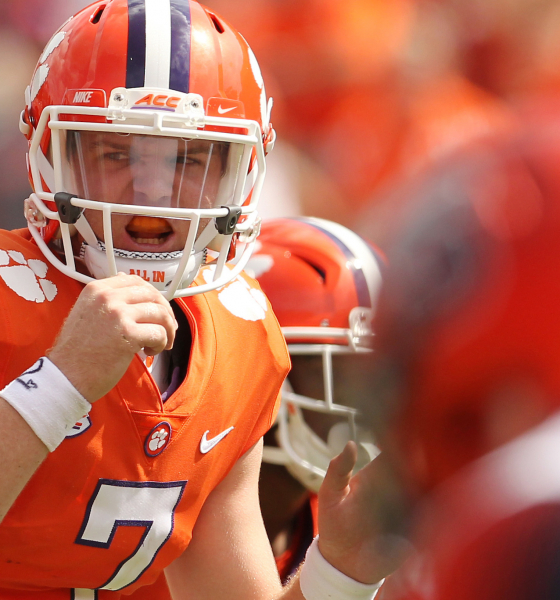 There is no “I” in team.  Nor is there an “I” in Kelly Bryant, although you would forgive many Clemson University fans for believing otherwise.

Bryant, 22, announced his decision to transfer from Clemson earlier this week.  His announcement came just two days after head coach Dabo Swinney informed him that true freshman Trevor Lawrence  – who has been splitting time with Bryant at quarterback – would make his first career start on Saturday against Syracuse.

In announcing his decision to quit the team, Bryant complained he had been treated unfairly by Swinney – and referred to his demotion as a “slap to the face.”

To be clear: We do not blame Bryant for his decision.  Assuming he follows through with it, he will have a full year of eligibility to play anywhere in the country in 2019.  And even if we did blame him for bolting Tiger Town, it remains his decision.

We can judge him all we want for it, but at the end of the day it is entirely his call.

Nonetheless, karma came home to Tiger Town on Saturday afternoon, providing an improbable hero at a time when the man who could have been riding to the rescue already rode off into the sunset.

Our guess is Bryant might be second-guessing his decision after watching upset-minded Syracuse nearly pull off its second consecutive victory over the third-ranked Tigers (5-0, 2-0 ACC).  In fact, we suspect Bryant was having a superfluity of doubts after watching Lawrence get rocked by Orange defensive back Evan Foster during a sideline scramble with less than five minutes remaining in the first half. 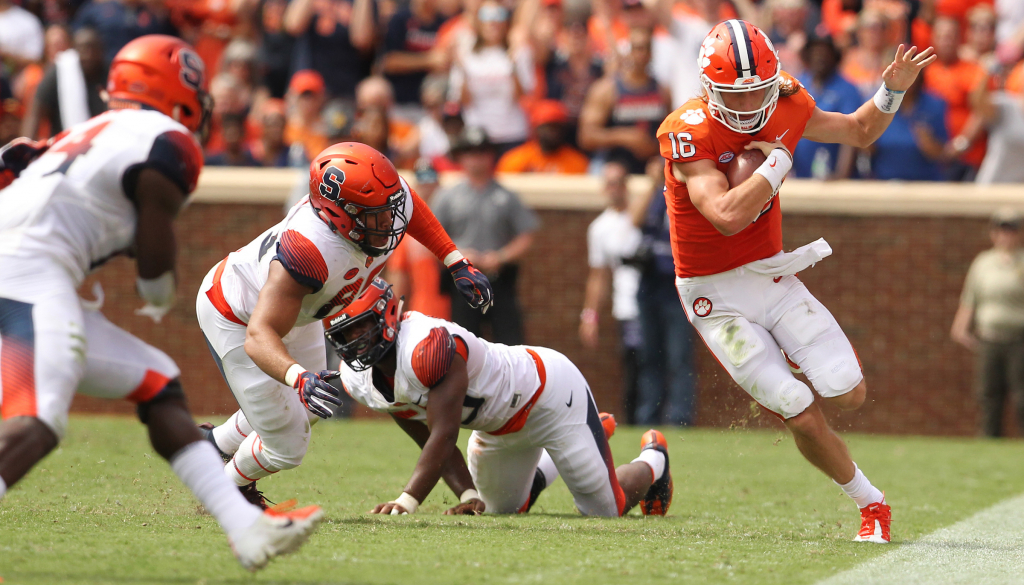 Lawrence, 18, was able to walk off the field after receiving a brutal shoulder-to-helmet hit from Foster – but he was ruled out for the remainder of the game.  There is no immediate word as to his availability in practice next week – or for Clemson’s upcoming road tilt against Wake Forest next Saturday.

Here a couple looks at the hit …

Lawrence wasn’t having his best game at the time he went down.  The 6-foot-6, 215-pound signal-caller from Cartersville, Georgia had completed ten of 15 passes for 93 yards with no touchdowns and no interceptions at the time of his injury.  Lawrence also lost a fumble, leading to a Syracuse field goal.

Numbers aside, the Clemson offense was simply struggling to move the chains with him under center – putting together just one scoring drive.  In other words, it was precisely the sort of scenario in which Swinney would have probably turned to Bryant in the hopes of him providing a spark.

But Bryant wasn’t there … and when Lawrence was bounced from the game it became the definitional worst-case scenario for Tiger fans.

Fortunately for them, the “worst-case scenario” – a.k.a. third-string quarterback Chase Brice – was up for the job.  Brice – a 6-foot-2, 220-pound redshirt freshman – atoned for a rocky start by making two critical plays late in the game to set up a deciding touchdown run by sophomore tailback Travis Etienne.

The first play was a 20-yard fourth down completion to freshman wide receiver Tee Higgins with only two-and-a-half minutes remaining in the game and Clemson trailing the Orange 23-20.  The second play occurred immediately thereafter, with Brice (below) brilliantly executing a read option for a 17-yard scamper. 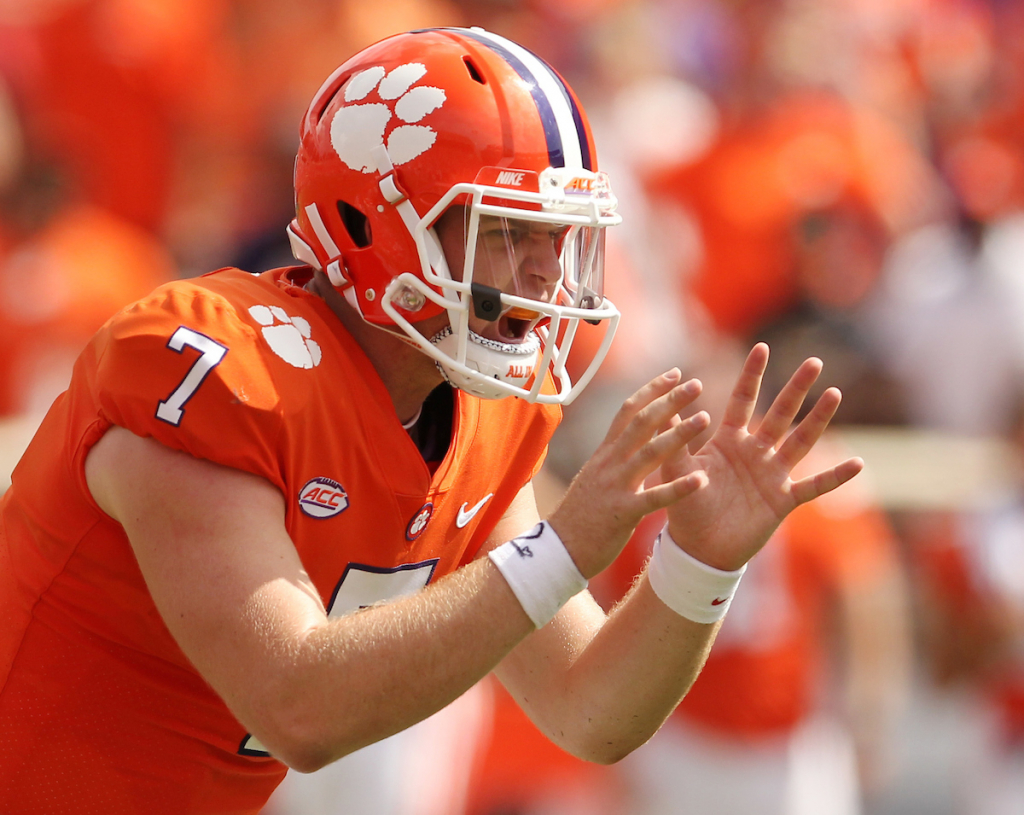 Brice finished completing seven of 13 passes for 83 yards with no touchdowns and one interception.  But Etienne was the real difference-maker on offense, amassing a career-high 203 yards on 27 carries with three touchdowns.

The 5-foot-10, 200-pound native of Jennings, Louisiana now has three straight 100-yard rushing performances – and 594 total yards on the ground (with eight touchdowns) this season.

Clemson’s star-studded defense also settled down after allowing Syracuse to take a 23-13 lead early in the fourth quarter.  The Tigers were led by true freshman Xavier Thomas – whose bone-crushing sack of Syracuse quarterback Eric Dungey with less than half-a-minute on the clock helped seal the 27-23 win.

All told, coordinator Brent Venables’ unit surrendered only 37 yards in the fourth quarter against the Orange – saving its best for when the game was on the line.

What’s next for Clemson?  Speculation was rampant on social media after the game that Bryant might decide to return to his team – something Swinney has held out as an option.

Stay tuned … the soap opera in Tiger Town is clearly far from over as Clemson seeks to claim its fourth consecutive trip to the College Football Playoff (CFP) and third appearance in a title game in four years.