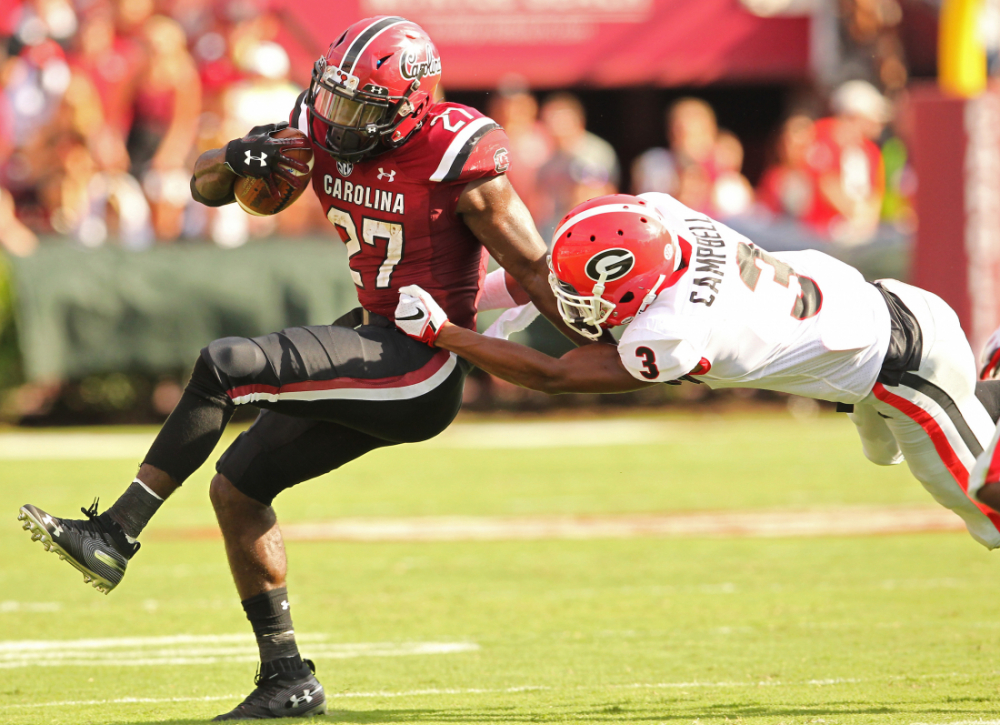 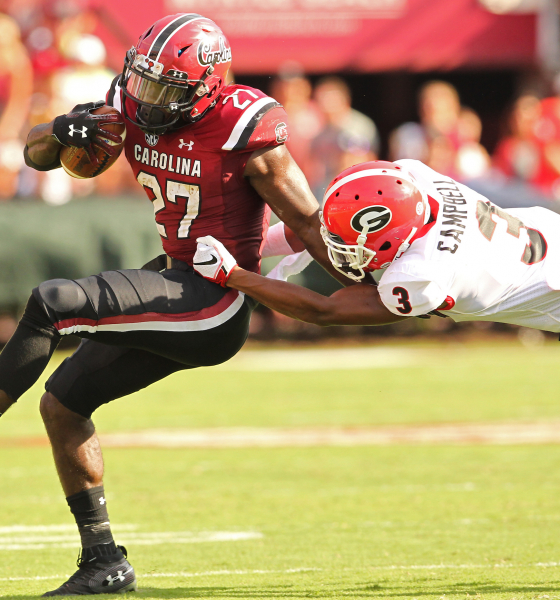 After hearing for weeks about how the University of South Carolina football team was poised to knock them off … and how they would never be able to replace all the talent they lost from last year’s College Football Playoff (CFP) runner-up squad, the Georgia Bulldogs issued a definitive, defiant response on Saturday.

No Roquan Smith?  No Isaiah Wynn?  No Nick Chubb?  No Sony Michel?  No Lorenzo Carter?

The Bulldogs who suited up and took the field for head coach Kirby Smart in their 2018 SEC opener at Williams-Brice Stadium look just fine, thank you very much.  In fact they blew the doors off of head coach Will Muschamp’s ostensibly resurgent Gamecocks (1-1, 0-1 SEC) – gaining for themselves the inside track for a second consecutive SEC East championship and leaving no doubt that they plan on contending for a national title.

Is Georgia really this good after losing so many stars to the NFL draft?

Yes.  Either that or South Carolina – a team many expected to return to the rarified air of double-digit wins this season – is going to have a much longer year than anyone could have imagined when the blazing September sun began making its way over Columbia, S.C. on Saturday afternoon.

For Gamecock fans, this was a devastating loss.  And for the Gamecock program, it was a potentially season-defining defeat.

Following a missed third down conversion on a potentially game-tying drive with 43 seconds left in the first half … it was never close, either. 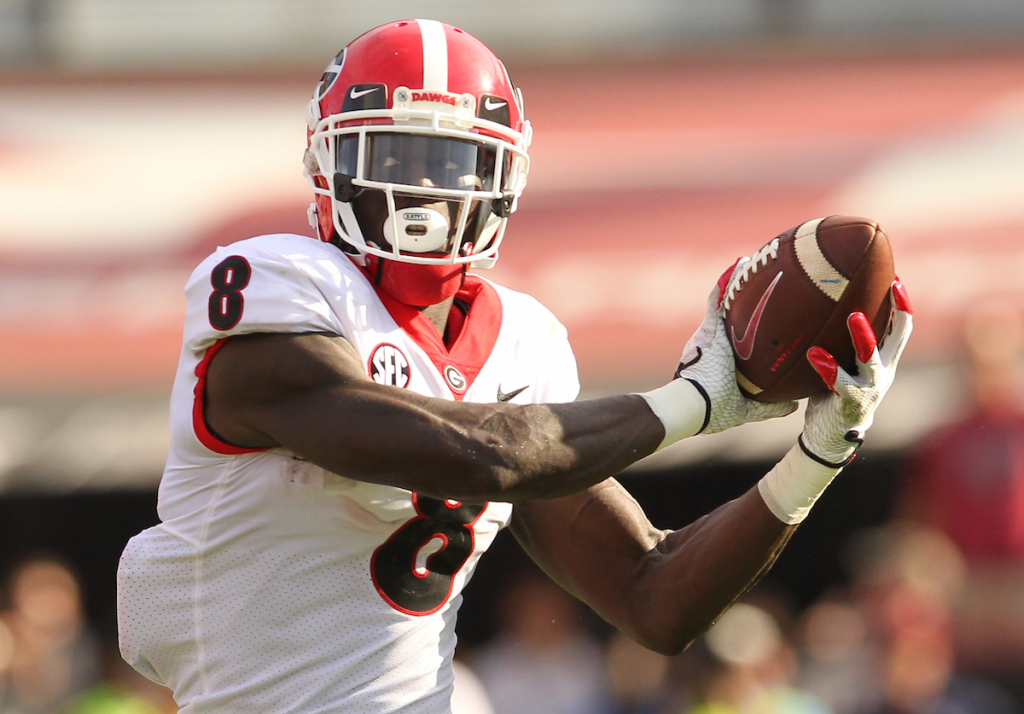 After South Carolina failed to tie the game on its final drive of the first stanza, Georgia (2-0, 1-0 SEC) took the ball forty yards in final thirty-six seconds to close out the half with a 44-yard field goal from Rodrigo Blankenship.  That score that put the Bulldogs up by 10 points – equal to the spread entering the game.

The second half was a Bulldog romp, though – showcasing the extent to which Smart and his staff thoroughly out-coached Muschamp and his assistants.

Led by sophomore quarterback Jake Fromm and junior wideout Mecole Hardman, the Bulldogs opened the second half with three consecutive touchdown drives – exploding for 236 yards of total offense in the first twelve minutes of the third quarter.  Meanwhile the Gamecocks went three-and-out on their first two possessions of the half – gaining just 16 yards – helplessly watching as Georgia raced to a 41-10 advantage (and watching their fans race to the exits).

Fromm completed 15 of 18 passes for 194 yards with a touchdown and an interception with Hardman snared six catches for 103 yards and a score.  On the ground, junior tailback Elijah Holyfield – son of four-time world heavyweight boxing champion Evander Holyfield – picked up 76 yards on nine carries with one touchdown.  Meanwhile sophomore D’Andre Swift (below) added 64 yards on 12 carries with a score.

For the Gamecocks, their numbers weren’t necessarily terrible … they just weren’t nearly enough.

Junior quarterback Jake Bentley – playing in arguably the biggest game of his career – completed 30 of 47 passes for 269 yards with one touchdown and a pair of interceptions.

He never had time to get into a rhythm, though (at least not until the second team Bulldog defense took the field).  And the Gamecock ground game never got going against the Georgia defense.

Painful to watch under any circumstances, the blowout loss was even more bittersweet for Gamecock fans considering they nearly landed Smart as their head coach following a disastrous 3-9 season in 2015.

The former Alabama defensive coordinator was reportedly discussing terms with South Carolina athletics director Ray Tanner when his phone rang … with Georgia on the line.  The Bulldogs were dumping Mark Richt and offering Smart their head coaching position.

He took the Georgia job, and South Carolina settled for Muschamp – who is now 0-3 against his alma mater. 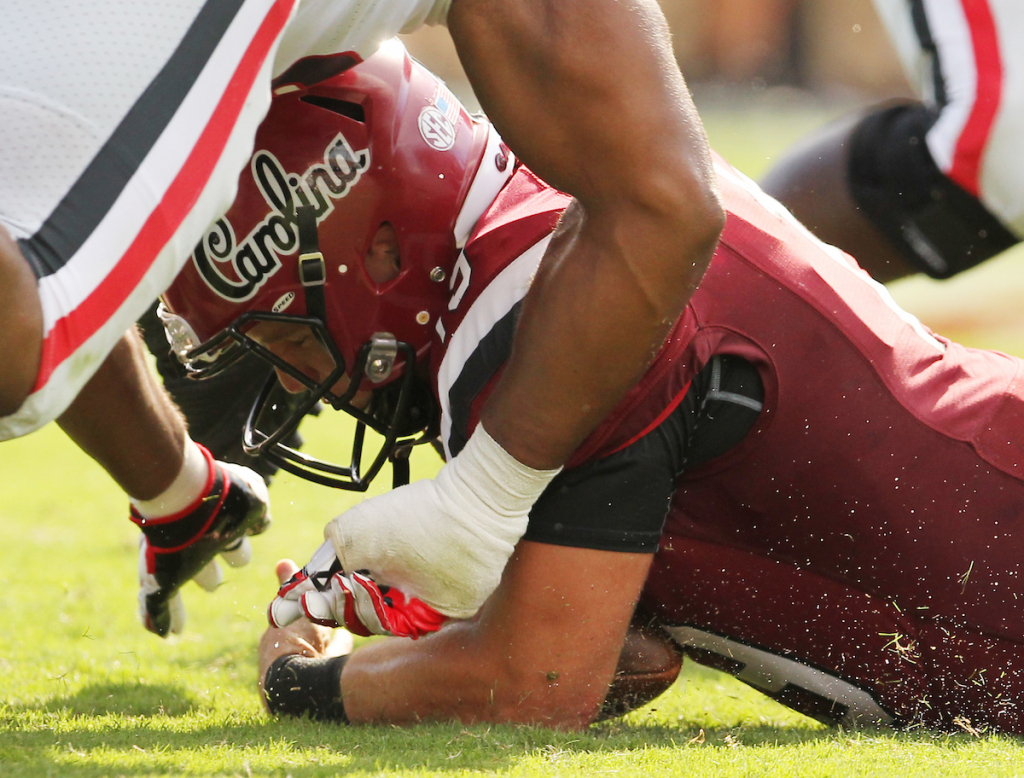 South Carolina’s Jake Bentley falls on the ball after a bad snap against Georgia during second-quarter action in Columbia, S.C. on Saturday, Sept. 8, 2018. (Travis Bell/SIDELINE CAROLINA)

Where does South Carolina’s once-promising season go from here?  It’s too soon to say, but Gamecock fans have to be concerned by what they saw on Saturday in a game where the home team had all the hype … and fell flat on its face.

This wasn’t just a lopsided loss, it was a deflating defeat – the sort of humiliation that has the potential to wreck an entire season if Muschamp and his staff aren’t careful.

Despite the fact that Muschamp wasn’t our first choice for the South Carolina coaching job, this news outlet has praised him for leading South Carolina from nine losses in 2015 to nine wins a year ago.

“The guy has proven us wrong from day one … and momentum continues to trend in the right direction,” we wrote during the run-up to the 2018 season.

Saturday was a huge step backward, however.

The Gamecocks host Marshall next Saturday before embarking on a pair of conference road games against Vanderbilt and Kentucky … two tilts which suddenly look a lot tougher than they did during preseason (especially with Kentucky upsetting No. 25 Florida on the road Saturday night).

NFL Ratings: How Low Can They Go?