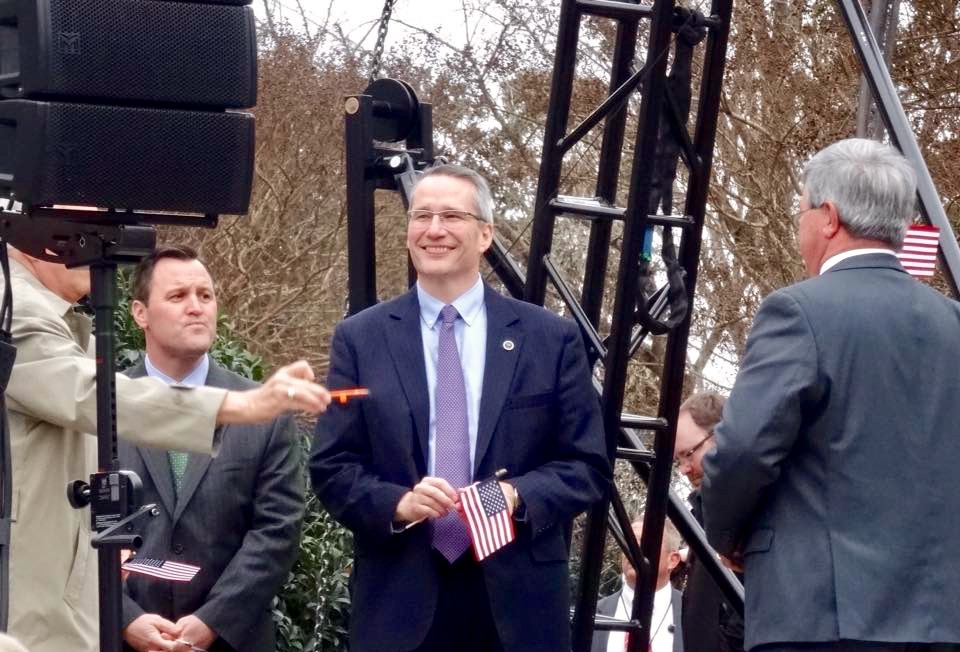 LEGISLATIVE LEADER ENTERS RACE FOR MICK MULVANEY’S SEAT AS THE FRONTRUNNER, ACCORDING TO EARLY POLLS …

S.C. House of Representatives speaker pro tempore Tommy Pope has made up his mind: The fourth-term state lawmaker will run for the Palmetto State’s fifth district seat in the U.S. Congress.  A formal announcement has yet to be scheduled, but Pope affirmed this week his plans to “seek the fifth district congressional seat in the upcoming special election.”

The fifth district covers the northern central portion of South Carolina – including the booming suburbs of Charlotte, N.C.  It has been reliably Republican since it was redrawn prior to the 2012 elections – which is one reason Democrats are having trouble getting top prospects (like S.C. Rep. Mandy Powers Norrell) to consider running for the seat.

Another reason?  Democrats are exceedingly leery of the surging support in the area for new U.S. president Donald Trump – who is actually responsible for causing the upcoming vacancy.

Trump appointed the current occupant of this seat – U.S. Rep. Mick Mulvaney – as the next director of the White House’s Office of Management and Budget (OMB), news which was reported exclusively here on FITSNews.  Mulvaney is currently awaiting confirmation to that post, at which point he will step down – triggering what is likely to be a crowed special election to fill his seat.

Pope is the favorite in that race, if early polls are to be believed – although he is likely to face withering criticism for his recent support of a proposed gas tax increase in the S.C. House of Representatives.  One of the other candidates for this seat – S.C. Rep. Ralph Norman – is already bashing him on this issue.

Pope, 54, had planned to run for governor of South Carolina in 2018 – however he reconsidered after Henry McMaster ascended to that post following another Trump appointment (ummmm).  McMaster has made it clear he plans on running for governor (multiple times, actually) as an incumbent.

The former solicitor had also been viewed as a likely candidate for the powerful post of Speaker of the House, but it appears the occupant of that office – Jay Lucas – has no immediate plans to give it up.

“I’ve decided to step forward because there has never been a greater opportunity for real conservative change in Washington and I want to help lead it,” Pope said in a statement announcing his candidacy.  “As the president said yesterday before the Super Bowl, ‘There is a lot of work to do!’ The fifth district’s next Representative must fight to cut our bloated government, protect the unborn, and restore our God-given rights to the states. Ultimately what our citizens want is a country that is safe and secure so that they and their loved ones can fully realize the pursuit of happiness.”

“Too many politicians get elected and lose touch with the people they are sworn to serve,” Pope added.  “In my career as a police officer, prosecutor and representative I have sworn an oath to defend the Constitution of this State and the United States. Just as I have upheld these oaths, I will do so in Congress, and I’ll never forget that my primary obligation is to the citizens of South Carolina and that the power of government comes from the people we serve.”

Former SCGOP chairman Chad Connelly of Prosperity, S.C. is also planning to enter the race, but we’re told he has been waiting until Mulvaney is confirmed to formally announce his plans.