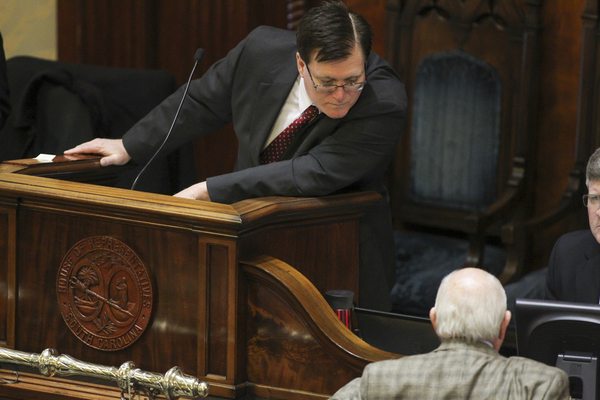 S.C. Speaker of the House Jay Lucas had a bitter and bruising first year on the job.  An acrimonious fight over the Confederate battle flag and a contentious gas tax debate left him in an exceedingly tenuous position heading into 2016.

Many believed Lucas was in danger of losing his job … and his “Republican” rivals began circling like sharks, ready to strike if an opportunity presented itself.

Lucas held on, though.  Then midway through the 2016 session, S.C. Rep. Kenny Bingham abruptly announced that he would not seek another term in the House.

Prior to his surprise announcement, many State House insiders believed Bingham was well-positioned to challenge Lucas for the Speaker’s gavel.

His pathway now clear, Lucas is unopposed heading into the 2017 legislative session – and he seems to be on far firmer footing among his constantly-conniving “Republican” caucus.

Sources close to the Hartsville, S.C. politician tell us he plans on serving at least two more terms as Speaker – which would be consistent with Lucas’ stated intentions at the time he was elected in October of 2014 following the resignation of former Speaker Bobby Harrell.

“Yes he was kind of the accidental Speaker,” one of Lucas’ colleagues told us.  “And he did say when he first came in, he said ‘I’m not gonna do this for that long,’ which I think some people in the chamber tried to use to their advantage – scheming against him.  But he took their best shots and he is still standing.”

This website has always liked Lucas on a personal level.  And to his credit, you never read about him being at the heart of any self-dealing scandals at the S.C. State House.

Do we support him ideologically?  No … we believe he has a bias toward big government, and is part of the problem when it comes to out-of-control state spending and borrowing.

Still, we’d probably take an honest fiscal liberal over a self-serving faux “conservative” most days of the week.