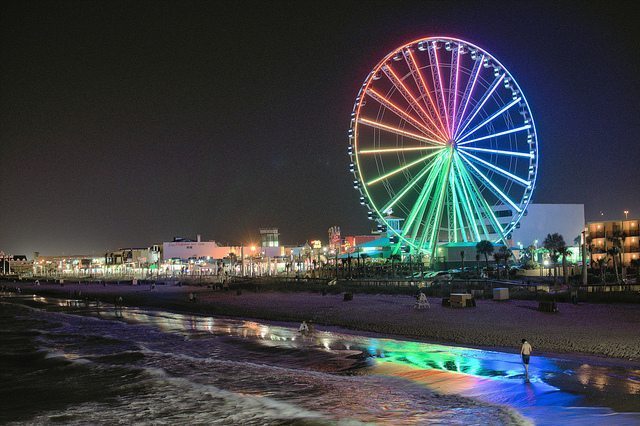 || By FITSNEWS || This week CBS News announced that Greenville, S.C. would play host to a “Republican” presidential debate on February 13, 2016.

You know … for those candidates who are still in the race by then (ahem, Rick Perry).

Why, then, did CBS News choose Greenville? Sources familiar with the decision tell FITS the notorious “Myrtle Beach Mafia” cost the city its bid – despite aggressive lobbying efforts by the “mafia’s” top money men, the Myrtle Beach Area Chamber of Commerce.

Myrtle Beach, S.C. mayor John Rhodes is at the center of the controversy.  In late 2011, the South Carolina “Republican” Party was forced to pay a Rhodes-affiliated group called “Grand Strand Juniors Volleyball” $80,000 because the group had booked the Myrtle Beach Convention Center for a tournament on January 16, 2012 – the date of a Fox News’ presidential debate.

According to S.C. Ethics Commission records, the $80,000 was given to the SCGOP by Chamber-affiliated groups – sort of a “pass-through” for Rhodes. Of note: Rhodes is also the executive director of the Myrtle Beach “Beach Ball” Classic, an annual basketball tournament held at the Convention Center – which raises questions about his prior knowledge of scheduling at the site.

What followed was bizarre, even by South Carolina standards.  On the day of the debate, Rhodes called in tow trucks in an attempt to have Fox News’ production and satellite trucks removed from the debate site after he disagreed with Fox News changing Myrtle Beach’s logos on the “spin room” walls.  Such logo placement is important, given the free advertising to TV audiences.

According to witnesses, Rhodes heatedly argued with the SCGOP’s then-Executive Director (now chairman) Matt Moore over the party’s contractual commitments, calling Moore “son” and demanding an $80,000 reduction on the party’s payout.

Rhodes eventually relented after Moore, according to witnesses who spoke with FITS on condition of anonymity, threatened to never bring a debate to Myrtle Beach again and publicly embarrass the mayor.

The drama apparently left a bitter taste in the mouth of Fox News executives, who apparently repeated the story to media friends in Washington, D.C. – including those at CBS.

Regardless of the behind-the-scenes drama, if you ask us, Myrtle Beach is getting exactly what it deserves.  For too long, the city’s crony capitalists have padded their pockets off of the people they are supposed to be serving.

Cue Boz and the Black Helicopters.

Bottom Line: The Coastal GOP is more like FITSNews-Libertarian-Moderates. You are to blame for McCain and Romney and Obama.

We cannot afford to let you have a hand in anything we do. The Greenville voter is far more Conservative. That is where the Party must go, or it will be as ass-backward as the Democrat Party is proving to be.

You guys are really pissed at Boz.

All he really does is claim that this little corner of the state is corrupt as hell.

I don’t see anyone really disputing that fact.

What are you so mad about?

Don’t you have a so called blog to attend to?

It’s usually the greedy little creep, who covets power and money that he is not resourceful enough to get himself, always accusing everyone else of corruption.

MB is a competitive game. It’s high stakes. The game is played hard ball down there.

It’s no more corrupt than anywhere else where a lot of money is involved. But if you’re too stupid, or too lazy, to get paid, like Boz, all you do is bitch and complain about being punked all the time.

Buz is in the mayor’s corner. And won’t stop being loyal to John over this silly overblown “scandal.”

You’re just an obsessed nutjob troll. Buz would do well to arm himself against such.

I’m sure Boz is armed to the hilt. Always gotta BOLO for that Illuminati, or Bigfoot.

Oh lord, there is more reason why they lost the bid. Ask Katon Dawson.

Why don’t you just tell us?

Because it is all about the suspense!

why – oh lord.
you ever been to fucking myrtle beach ?

As the fourth generation of my family to have lived in Myrtle Beach (although I no longer do), I’m glad to see the change of venue after the tacky stunt that the Chamber of Commerce pulled following the 2008 debate.

Will facts are not totally true on what took place in MB on day of the debate. The scgop and Fox did not fulfill 3 points as was on the original contract. Money was raised so that these three things would happen. When MB officials arrived with the check what they had agreed to pay for wasn’t happening. Rhodes did as he should have and at no time behaved in a manner that was out of order. The trucks were never moved. As for the son remark let’s say that Rhodes was not the rude one. I was there with these folks all day and was a witness to the day long fiasco. The blame should be on scgop not MB. If this is the only reason MB didn’t get the debate that is shameful. Facts are facts and truth is truth.

Don’t bother, Susu. This is the UFO-Illuminati crowd. Reality makes not one bit of difference to them.

Mythology is king, facts be damned.

For the record. I would bet what you are describing is 100% accurate. I’m basing that on track record. Just ask Rep. Bingham.

Sic, I beg to differ. Nothing is bizarre by South Carolina standards.

Where the hell is SLED on these type things.
Oh, right, covering up Gov. Halley’s crimes.

Don’t forget that the GOP leaders don’t want news outlets showing images of all those Confederate Flags hanging in beachwear store windows along side the republican candidates.

Is that why yall cancelled the Hitler Library Democrat Go Holocaust debate when your plan parenthood secret was exposed.

What? Let me guess? Trump supporter.

Let me guess: you’re a supporter of selling mutilated baby parts to the highest bidder to feed your greed, and satisfy your hatred of the innocent.

IF I had to guess why the SCGOP prefers Greenville, likely due to MBTP. However, I think Greenville will be a short lived location. Maybe a couple years? People in Greenville don’t seem to agree AT ALL on politics and it is very ugly. I’m not talking about the Democrats v. Republicans – Greenville is solid red compared to the rest of the state. It is Republicans arguing with other Republicans. Will be interesting to see how this works out.