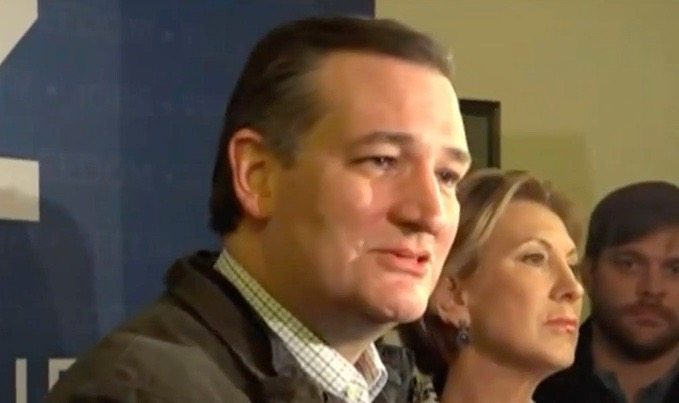 LOSING IS NO FUN …

U.S. Senator Ted Cruz of Texas is poised for a potentially campaign-ending beatdown in Indiana this week.

Hold up … hasn’t he been mathematically-eliminated from the election already?

Yes … yes he has.  But this is 2016, a year in which the GOP establishment has decreed “the will of the people is crap.”

Anyway … faced with the prospect of getting trounced in a must-win state, Cruz vented his spleen against “Republican” frontrunner Donald Trump.

Flanked by his wife Heidi Cruz and his aspirational vice presidential nominee Carly Fiorina,  a dejected Cruz responded to questions about his campaign’s recent backsliding by

“I’m going to do something I haven’t done the entire campaign. I’m going to tell you what I really think of Donald Trump. This man is a pathological liar. He doesn’t know the difference between truth and lies. He lies practically every word that comes out of his mouth. And in a pattern that I think is straight out of a psychology text book, his response is to accuse everybody else of lying.”

Cruz was just getting warmed up, accusing Trump of being a “serial philander,” “utterly amoral” and of “lying to his supporters.”

“Donald Trump is such a narcissist that Barack Obama looks at him and says, ‘Dude, what’s your problem?'” Cruz said. “Whatever lie he’s telling, in that minute he believes it. But the man is utterly amoral. Morality does not exist for him.”

“Donald Trump is a serial philanderer and he boasts about it,” Cruz added. “This is not a secret, he’s proud of being a serial philander. I want everyone to think about your teenage kids. The president of the United States talks about how great it is to commit adultery. How proud he is, describes his battle with venereal disease as his own personal Vietnam. That’s a quote from the Howard Stern show.”

So what set Cruz off?  Apparently, his ire was stoked when Trump regurgitated unproven rumors regarding Cruz’s father allegedly participating in the 1963 assassination of John F. Kennedy.

“Let’s be clear: this is nuts. This is not a reasonable position. This is just kooky,” Cruz said.  “And while I’m at it, I guess I should go ahead and admit that my dad killed JFK, he is secretly Elvis and Jimmy Hoffa is buried in his backyard.”

“Ted Cruz is a desperate candidate trying to save his failing campaign,” Trump said in a statement. “It is no surprise he has resorted to his usual tactics of over-the-top rhetoric that nobody believes. Over the last week, I have watched Lyin’ Ted become more and more unhinged as he is unable to react under the pressure and stress of losing, in all cases by landslides, the last six primary elections – in fact, coming in last place in all but one of them. Today’s ridiculous outburst only proves what I have been saying for a long time, that Ted Cruz does not have the temperament to be President of the United States.”

Oddly enough, Cruz and Trump were allies for much of the 2016 campaign – both raking in support from voters frustrated with status quo candidates.  Both acknowledged their “bromance,” too.

“Well, it is a little bit of a romance,” Trump said last September. “I like him. He likes me.”

Trump also praised Cruz for supporting his aggressive stance on the issue of illegal immigration.

“I always respected that,” Trump said. “I thought that was very nice.”

Cruz even went so far as to slam other “Republican” candidates who attacked Trump.

Of course when crunch time hit, Cruz and Trump quickly turned on one another – and now that Trump appears to be on the verge of closing the deal, things are clearly boiling over.

Will Cruz’s meltdown matter in Indiana?  No …

Already in desperation mode a week ago, Cruz’s effort to collude on delegates with liberal Ohio governor John Kasich backfired badly – reinforcing the perception that the “Republican” primary process was rigged.

That’s added fuel to Trump’s late surge … while taking wind out of the sails of those establishment “Republicans” looking to deny Trump the nomination.