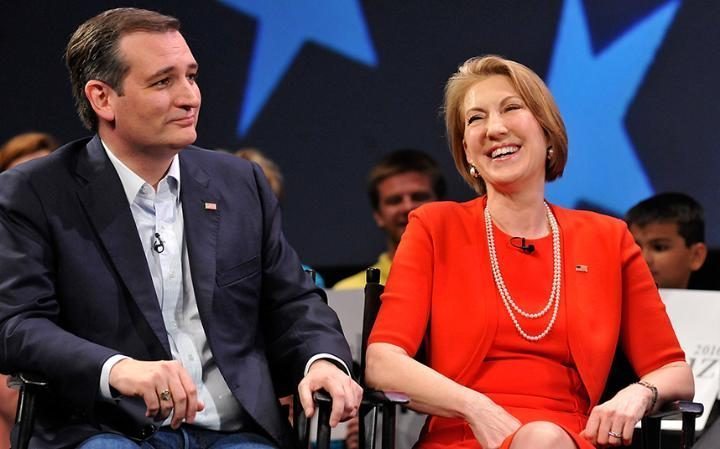 YES … AND IT’S NOT NIKKI HALEY

It’s been over a week since U.S. Senator Ted Cruz of Texas was mathematically-eliminated from winning the “Republican” presidential nomination on the first ballot (i.e. based on the results of this year’s GOP caucuses and primaries).  And it’s been less than 48 hours since he announced a bizarre alliance with liberal Ohio governor John Kasich to try and deny GOP frontrunner Donald Trump the delegates he needs to capture the nomination.

How’s that plan working out?  Eh … not so well.

Desperate to inject some momentum into his flagging candidacy, Cruz announced his intention to name former Hewlett-Packard CEO Carly Fiorina as his vice presidential pick in the event he become the GOP nominee.

“After a great deal of consideration and prayer, I have come to the conclusion that if I am nominated to be president of the United States that I will run on a ticket with my vice presidential nominee Carly Fiorina,” he told a crowd in Indianapolis.

“She is careful. She is measured. She is serious,” Cruz said. “She doesn’t get rattled.”

Fiorina endorsed Cruz’s bid six weeks ago after giving up on her own candidacy.

And yes, Cruz’s selection of Fiorina has rehashed talk of his sex scandal (which listed a Fiorina advisor as one of his alleged mistresses) – as well as the mysterious $500,000 contribution Fiorina’s campaign received last summer from a political action committee supporting Cruz.

Still no clue what that’s all about …

Fiorina’s selection is a blow to S.C. governor Nikki Haley – the one-time vice presidential frontrunner who went all in for the establishment candidate in the race, Marco Rubio.  Haley belatedly backed Cruz, but not after she allegedly misled him about her intentions during the “First in the South” presidential primary.

“She’ll be convinced Carly is positioning herself as the GOP female savior candidate of 2020,” our intrepid Washington, D.C. operative said of Haley. “If she’s a screamer she’s probably screaming at her TV set right now.”

Our Rigged Republic: America Is Getting It