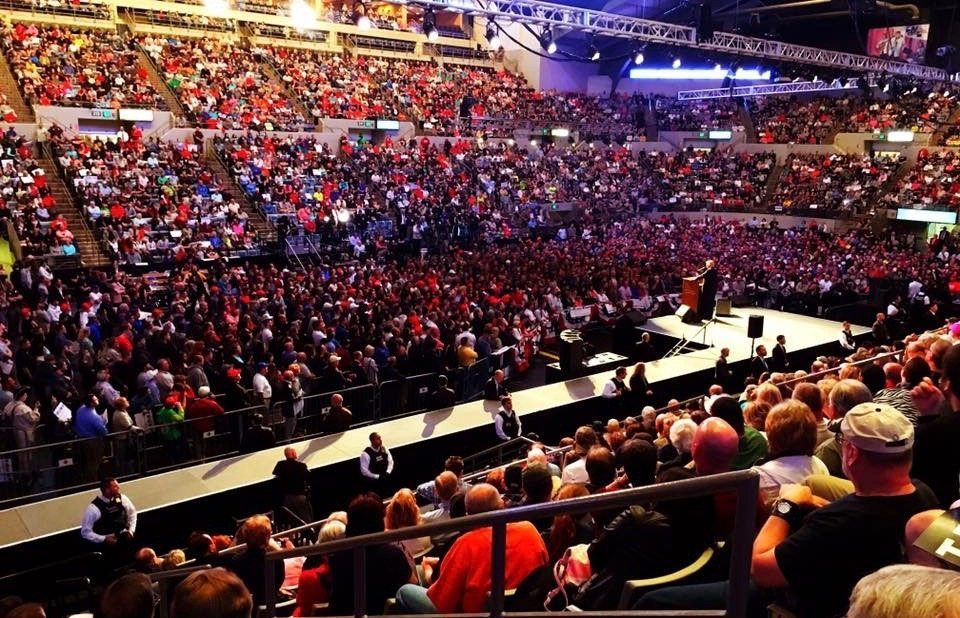 “Republican” presidential frontrunner Donald Trump is poised to score a potential knockout victory in early-voting Indiana this week.  Meanwhile U.S. Senator Ted Cruz of Texas is struggling to maintain momentum in his fight for delegates in a contested convention setting (Cruz has been mathematically-eliminated from capturing the GOP nomination on the first ballot).

According to a new NBC News/ Wall Street Journal/ Marist poll, Trump is leading Cruz by a 49-34 percent margin in the Hoosier State.

Talk about a beatdown …

Meanwhile, by a 58-34 percent margin Indiana voters said they disapproved of Cruz’s collusion with Ohio governor John Kasich in an effort to deny Trump the 1,237 delegates he needs to theoretically clinch the “Republican” nomination at this summer’s national convention in Cleveland.

In addition to a likely loss in Indiana, Cruz is dealing with potentially disastrous defections

From reporter Jeremy W. Peters of The New York Times …

Before Mr. Trump’s crushing victory in Pennsylvania last week, Mr. Cruz’s campaign boasted that it had 69 people devoted to acquiring as many as possible of the state’s 54 unbound delegates — who are free to vote as they please on the first ballot, making them potentially decisive players in a contested convention.

In North Dakota, where the Cruz campaign declared victory after the state Republican convention on April 3 and declared that it had won “a vast majority” of the state’s 28 unbound delegates, Mr. Cruz’s support appears to be weakening. In interviews, delegates said he really had only about a dozen firm commitments to begin with, and some of them appear to be wavering as he falls farther behind Mr. Trump.

It’s almost time to “stick a fork” in this race.

Viewed as unlikely to hit the 1,237-delegate threshold as recently as last month, Trump’s late surge has him poised to clear this critical hurdle with room to spare.

Does this mean he’s guaranteed to win the GOP nomination?  No … party leaders could conceivably manipulate the rules of this summer’s convention in an effort to shortchange Trump’s delegate count.  Meanwhile the delegates themselves could betray their state’s voters and support other candidates.

But those scenarios become far less likely the stronger Trump gets … and the faster Cruz fades.

They also become far more perilous for a badly-divided “Republican” party, which would court electoral oblivion by denying Trump the nomination at this stage of the game.