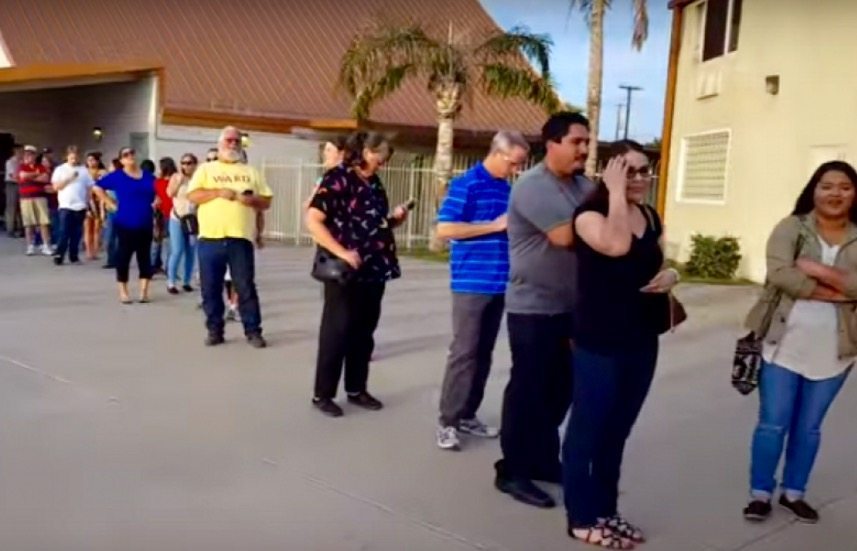 A major voting rights lawsuit will be filed in Arizona this week related to last month’s disastrous primary election – in which voters were forced to wait in lines of up to five hours due to a shortage of available polling places (and ballots).

“Arizonans were denied their constitutional right to vote because those who run the system weren’t prepared, and it can never happen again,” said Ann Kilpatrick, a Democratic U.S. Senatorial candidate who is one of the plaintiffs in the action.

Those bringing the suit – including the presidential campaign of Hillary Clinton – allege that the polling place/ ballot shortages were specifically targeted to low-income, minority areas of the state.  Oh, and in addition to the lawsuit the U.S. Department of Justice (USDOJ) has opened an investigation in the matter – sending a letter to Arizona officials demanding that they provide information to the agency’s civil rights division so it can be determined whether Arizonans voting rights were violated.

We wholeheartedly support this effort.  Fair elections are the bedrock of representative government, and anything impeding upon them must be prosecuted to the fullest extent of the law.  The right to vote is elemental to who we are as a country, right?

Indeed it is.  For everyone.

Our problem?  The federal government’s selective outrage on this issue.  The USDOJ is tripping over itself to investigate this disenfranchisement – as it should – but what about the stolen election that took place in South Carolina in 2012?

Compelling evidence exists that corrupt election officials in Richland County, S.C. deliberately caused illegal voting machine shortages during the 2012 election.  These shortages disproportionately impacted voters in anti-tax regions of the county – resulting in wait times of up to seven hours. In fact, it appears several prominent liberal politicians were involved in this effort – which resulted in a $1.2 billion tax hike being narrowly “approved” by voters.

There is currently an ongoing investigation into the illegal use of the proceeds of this tax hike, but the real issue – the stolen election – has yet to be addressed.

We have repeatedly called on the USDOJ to investigate this matter, but three-and-a-half years later … nothing has happened.

In his second inaugural address U.S. president Barack Obama specifically addressed the issue of lengthy lines at the polls.

“Our journey is not complete until no citizen is forced to wait for hours to exercise the right to vote,” he said.

Resources are being brought to bear … in Arizona.

The takeaway from all this is as simple as it is frightening.  If you are a low-income, minority voter who was forced to endure long lines or other irregularities in attempting to vote, the federal government has your back.  On the other hand, if you are a middle-income white voter who was forced to endure even longer lines – your vote can be stolen under suspicious circumstances and absolutely nothing will be done to help you.

Again, we’re glad local officials in South Carolina are exposing the theft associated with the 2012 “rigged election” in Richland County, S.C. – but those efforts do not address the heart of the matter.

An election was stolen by tax-hiking liberals and absolutely nothing has been done about it.