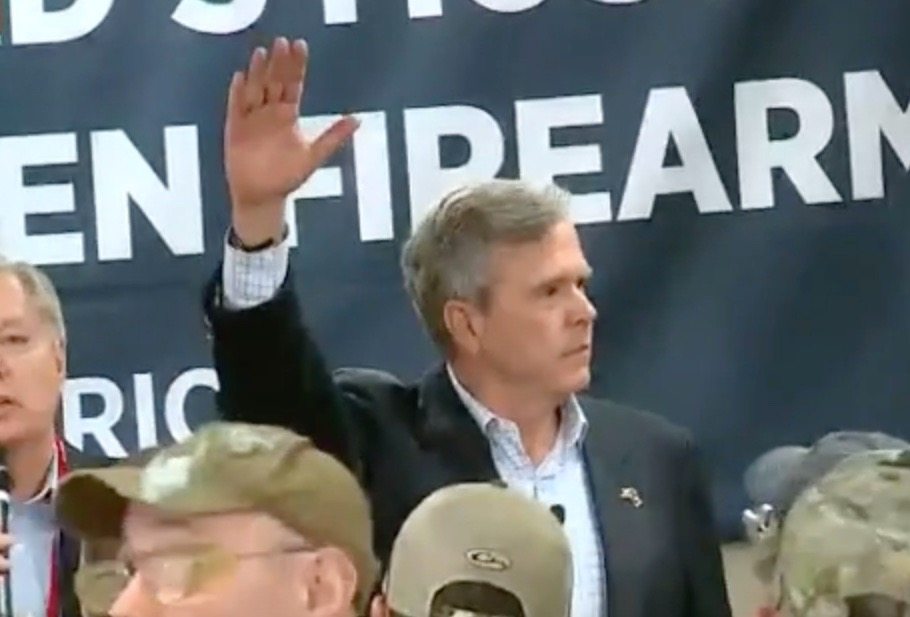 A RARE MOMENT OF HONESTY FROM “COMPASSIONATE CONSERVATIVE”

He’s supposed to be the smartest candidate in the race, but former Florida governor Jeb Bush had quite the “oops” moment on the campaign trail in early-voting South Carolina this week.

Bush – who is struggling to gain traction with GOP voters despite tens of millions of dollars being spent on behalf of his candidacy – did himself no favors while visiting a gun manufacturing facility in Columbia, S.C. alongside liberal U.S. Senator Lindsey Graham.

The visit was another stop in Bush’s last-ditch bid to salvage at least a third-place finish in the Palmetto State, where his brother George W. Bush won a critical (albeit dirty) victory in 2000 en route to capturing the presidency.

Which he then totally blew (as even his brother has to some extent acknowledged).

And a confused-looking Bush did just that …

We thought Bush’s “I’m With Stupid” strategy was a reference to him campaigning with his brother, not the other way around.

Michael McDaniel: "Battle For The Brethren" In South Carolina

The absolute best is Jeb Bush letting his domain name expire, & Trump buying it and redirecting people to his campaign site…lol

What a loser Jeb! is…Trump drinks his milkshake:

Not that I’m a big Jeb fan but are you sure he let it expire or even owned it to begin with. There are other sites using “jebbush….” out there also.

Yes, I’m sure. It was a news item the other day, which is how I found out.

The article I read, Trump didn’t own jebbush.com another company did, that’s not to say Trump doesn’t own that company.

By “…drinks his milkshake…” are you implying that Trump sucks Bush’s straw?

G. W. screwed the pooch for anyone with the name Bush for a least a generation.

It should be numerous generations. Their fucktardery is like the Energizer Bunny. It keeps going, and goin, and going…

Jeb is from a family of entitled folks. We do not need another Clinton or Bush. I voted for the old man once and Walker twice. I made a mistake.Politicians have tunnel vision and lose interest in those they are elected to serve. That is all those that are not power brokers.
George was wrong going into Iraq because Saddam kept them out from under the hands of Iran. Just like Hillary and Obama taking out Ghadaffi they are now going to be handled like Iraq. This all comes from political parties and will never work because each party looks out for its own ideals and could care less about the over all welfare of a total America. Both of these scenario’s could have been handled better and probably would have worked if we had and kept troops there but there again the politicians do not have enough fore sight and it waste Trillions of American dollars.American politicians are evil and think only of self and today!

I was going to vote for Jeb, then he got contacts. Now he looks stupid, like his brother. Oops!