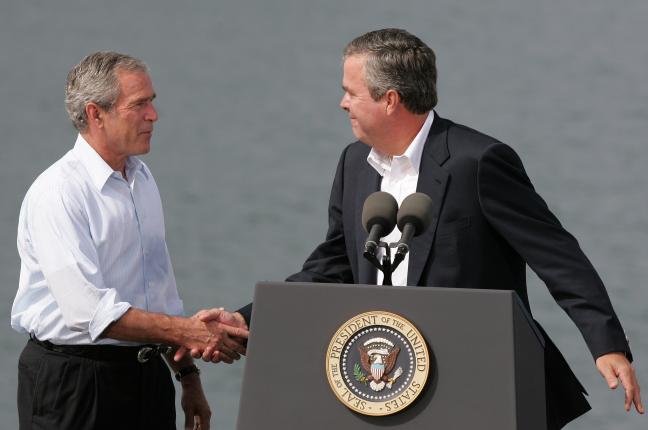 AND THE GLOBAL INTERVENTIONISM THAT GOES WITH IT …

We call it the “I’m With Stupid” strategy …

Anyway, since Bush’s campaign is still struggling he’s decided to double down on “Dubya” – a.k.a. “The Deciderer.”  Specifically, the Right to Rise PAC – which inexplicably continues to back Bush despite his dismal 2.8 percent showing in early-voting Iowa – is launching a new television ad in South Carolina starring the former chief executive.

According to reporter Alex Isenstadt of Politico, who broke the story, the “W” ad will begin airing in South Carolina on Friday.

Not only that, according to Isenstadt the former president is planning to “hit the campaign trail in the state” for his brother over the coming weeks.

“The first job of the president is to protect America,” Bush (the dumb one) says in the spot.  “The next president must be prepared to lead. I know Jeb. I know his good heart and his strong backbone.”

“Jeb will unite our country,” Bush added.  “He knows how to bring the world together against terror. He knows when tough measures must be taken.  Experience and judgment count in the Oval Office. Jeb Bush is a leader who will keep our country safe.”

Really?  By warmongering all over the planet with money we don’t have?  All so we can create bigger, angrier enemies?

The same way his idiot brother did?

We thought Jeb knew better than that.

This website is (obviously) no fan of Bush 43.  In fact we ranked him as the “Worst President Ever” three months before his term ended – although the current occupant of the Oval Office is obviously No. 1 with a bullet now.

Still, Bush was a terrible president who championed big government at every turn … and South Carolinians suffered under him and the “Republican” Congress the same way they’ve suffered under Barack Obama, John Boehner and the current “Republican” leadership in Washington, D.C.

Frankly we’re amazed Bush (Jeb!, that is) is staying in the race.  At this point, we figured his status quo donors would have seen the writing on the wall and embraced the candidacy of the other “centrist” GOP candidate in the race – U.S. Senator Marco Rubio of Florida.

Marco Rubio Takes Credit For A Vote He Didn't Cast