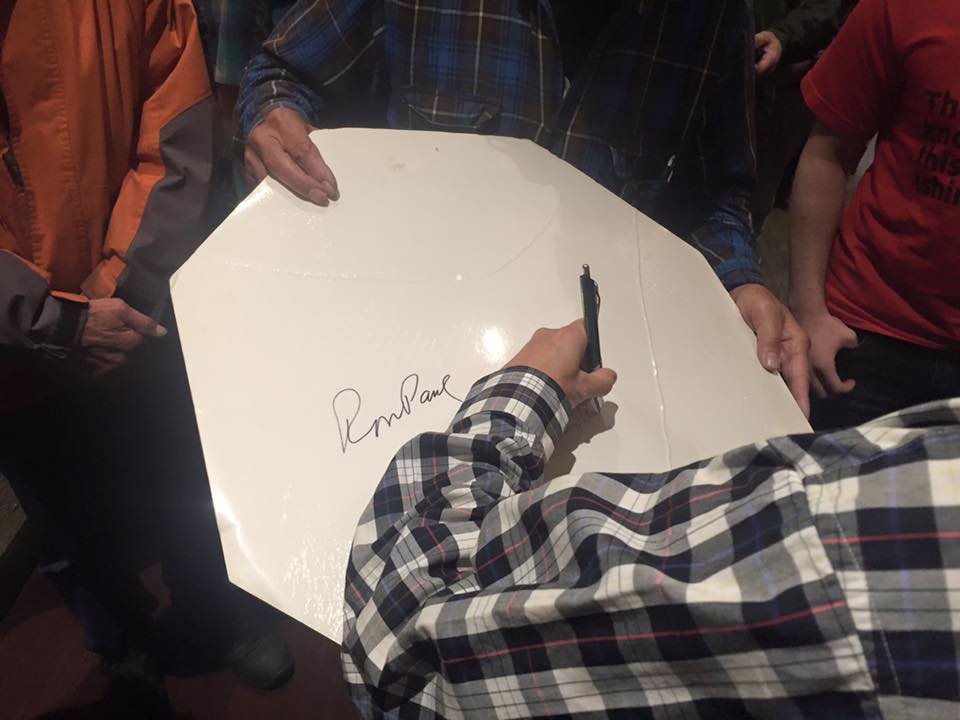 || By FITSNEWS || Back in December of 2013 – when this website was daily singing his praises – U.S. Senator Rand Paul of Kentucky was supported by roughly 17 percent of the “Republican” primary electorate.

The GOP frontrunner at the time? New Jersey governor Chris Christie – who peaked at 20 percent support (you know, before the whole Bridge-gate scandal).

Anyway Paul – who was obviously running for president already – had a critical decision to make.  How should he best go about expanding his 17 percent support among “Republican” primary voters?  Should he build within the party’s base?  Or should he look outside the GOP primary construct?

Three possible roads lay ahead of him …

In this scenario, Paul would have left the “Republican” party and launched an aggressive, uncompromising campaign for president as an independent – invoking the fiscally conservative, socially libertarian ideology of his father, former U.S. Rep. Ron Paul.

In this scenario, Paul would have advanced the same uncompromising ideological matrix … only within the framework of a GOP primary campaign.

In this scenario (which is the option he chose), Paul sought the GOP nomination as a conventional “Republican” candidate – embracing establishment politicians and morphing his views in an effort to become more “electable.”

Obviously had Paul chosen one of the first two options, there’s a very good chance the Donald Trump phenomenon (a.k.a. this juggernaut) never would have happened.  The anti-establishment vein Trump has expertly tapped into with his outspoken populism was Paul’s for the taking … he simply chose not to take it.

True, Paul has offered up some solid substance on the fiscal front, but he’s been less than impressive on liberty issues and he’s taken major steps in the wrong direction when it comes to foreign policy.

Sadly, that’s just the nature of running a campaign based on the wishes of a majority of likely “Republican” primary voters as opposed to a campaign which shows those voters – and all voters – the proper path forward.

Paul hasn’t done that, though … and as a result his 17 percent high-water mark has receded all the way to 3.5 percent nationally.

In politics you can survive being “strong and wrong” (that was the motto of former president Bill Clinton), but you can’t be weak and wrong.

Last month, we briefly addressed Paul’s efforts to reorient his candidacy by trotting out his father …

Rand Paul – the candidate who was supposed to grow the party by inviting new views – had taken on the role of GOP loyalty czar, all in a desperate bid to undermine the candidacy of Trump, who is raking in all the anti-establishment supporters the younger Paul was supposed to be inspiring.

“This above all: To thine own self be true,” Shakespeare famously wrote in Hamlet.

If only Paul had taken it.

Beware The Fourth Blood Moon Of The Tetrad

Someone Is Cybersquatting On Carly Fiorina

Chilling Aboard “Trump Force One”

Bernie would be proud!!!!

To believe that RP ever had 17% of GOP support is ridiculous. So the first premise of this article is wrong. The only choice Paul had was to keep plugging along just like his dad. Organize, schlep, whatever. just get in the news. Trump? Seriously? DOA.

I think the real tragedy is that RP’s message is still so unpolished.

In the spirit of Will’s passion for 90’s alt rock:

If he were a libertarian there wouldn’t be any roads for him to choose from. rimshot

Rand running the same campaign his dad did would result in him failing just like his dad did.

I agree. Same campaign would’ve ended with the same result. I was of the opinion that he should’ve waited until 2020. He would’ve avoided the dual race drama in his state and the freshman senator trap. Also, what better year for an eye doctor to run for president?

“Rand running the same campaign his dad did would result in him failing just like his dad did.”

Yes, but at least not failing as badly as he is currently.

Lots of time left. Hopefully enough people will realize soon enough that Rand is the only sensible candidate.

None of them are worthy to run our lives.

Rand wants you to run your own life. Libertarians don’t believe governments should steal from you and run your life. They are all about liberty… your liberty to do, make, think, trade, express anything.

Back in 2013 you were praising him and then when the establishment Republicans joined the race you dumped him. Clear as a sunny day to me. this news outlet is for the establishment not for a real constitutionalist conservative. The only thing that has changed is this media outlet. Rand Paul is still pushing for what he believed in back then and will keep pushing for it. I Stand with Rand. He has proven he is not a sell out to one of the candidates that brags he can buy any politician and buy any vote.

They only reason they “print” articles with Rand or Ron’s name in it is to get hits on their site. They can’t make any money off of actual news ratings, so they print this garbage so they can generate revenue from hair regrowth ads, and “25 Celebrities with the most/least blah blah blah blah”. FITS doesn’t even put the “author’s” name on their articles. The idea that some nobody moron is giving advice to Senator Paul on how he should run his campaign is laughable. They can’t even get their name on their own article. BONG!

James (good name) – take it easy man. The person who wrote this is a giant knob! No wonder they hide their name…

Great guy on fiscal and national issues. Too much like his dad on foreign policy. I could have easily supported him for Pres. Oh well.

“Too much like his dad on foreign policy.” Yeah, those crazy Libertarians and their ridiculous dedication to peace. It has gotten so bad in the U.S. I am afraid to get a tan. I might be mistaken for a Jihadist. We should just continue on bombing poor countries, THAT DO NOT THREATEN OUR NATIONAL SECURITY, HAVE NO MILITARY THAT CAN COME HERE, AND HAVE NEVER PUBLICLY THREATENED ANY VIOLENCE ON THE US. Rand’s Foreign policy is Reagan’s foreign policy, in fact it was the traditional policy of the real Republican Party. You cannot be for small government at home, and for spreading our murderous empire overseas. Hypocrisy… they name is RogueElephant.

Each one of these articles is more comical than the last, hunk of crap from FITS News. I fully understand why the author is kept anonymous. If anyone knew who was writing this, this stuff would follow them around forever…what a hack.

“This above all: to thine own self be true” Good advice?

This is a perfect example where some people totally misinterpret the intent of the author. Shakespeare has Polonius blather advice to his son, Laertes, as he is leaving for school in France. Laertes can’t wait to get away, since it is obvious that Polonius is a windbag.

The careful reader of Hamlet will realize that everything Polonius says sounds good on the surface, but after some thought, turns out to be sanctimonious crap.

You mean “back when we were still cashing the Rand Paul for President checks.” And before Nancy Mace began serving as the front man for the pimping out of Fits News for checks from Trump.

A few things: It bugs me too that he’s changed his view on foreign policy. However when I talk to people like my father, I understand that there is still an entire generation that believes that we need to get the Muslims before they get us. I think he had to do what he had to do to have a chance. Overall though Rand is still Rand. Also, this poll stuff is garbage. Rand just won the Michigan Straw Poll and is destroying all other candidates in endorsements. A massive part of Rands base is millennials. I don’t know a single millennial with a land line so I would say Rands poll numbers and poll numbers in general are pretty skewed and inaccurate.

What a load of contrived BS.

Idea for new product in 2016-2017: toilet paper with all articles written by FITS News trying to trash President-Elect Paul’s candidacy.