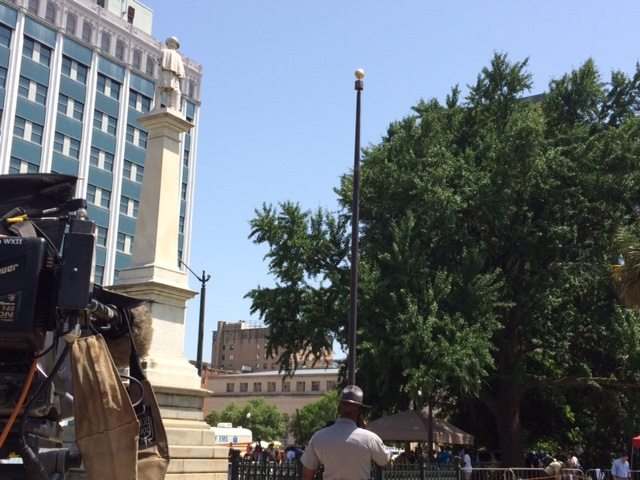 THE FLAG IS DOWN … WHERE DOES THE PALMETTO STATE GO FROM HERE?

|| By FITSNEWS || Fifty-four years after it was raised by state lawmakers, the Confederate flag has been removed from the grounds of the South Carolina capital in the aftermath of a terrible, racially driven tragedy.

So … what happens now?  Where does the Palmetto State go from here?

We’ll be writing in the coming weeks and months about the fallout from the flag flap … which we can assure our readers is going to be intense.  Relationships have been permanently damaged inside the building where the flag once flew, and the Palmetto state’s power structure could shift dramatically as a result.

We don’t yet know how all the power plays will ultimately play out … but we do know a category five sh*tstorm is brewing.  And the ship of state is going to have to weather that storm with a badly divided crew.

In recent flag-related posts we’ve been pointing out (“control c, control v-style”) that South Carolina has serious, chronic, deeply ingrained problems it desperately needs to address.  Our hope was that dealing with the flag expeditiously would enable us to get to work in addressing these problems in a more united fashion.

Judging from the initial reaction we’re seeing under the State House dome – this hope has been tragically misplaced.

Black lawmakers are shamelessly exploiting the racial turmoil to advance more of the same big government “equality of outcome” nonsense that has held South Carolinians of all races back for decades.

And Americans of all races, for that matter.

Seriously: It’s a quantum leap to go from “some flag-toting crazy white person just killed a bunch of black people” to “let’s expand Medicaid in their memory,” but black lawmakers have made that trip.

Apparently the demonstrated failure of massive government expansions to even remotely improve black people’s lot in life is been completely lost on them.

Meanwhile white lawmakers – the vast majority of whom subscribe to the same big government fiction – are at each other’s throats in the aftermath of the flag coming down.  Many who sought to defend what they saw as the south’s sacred honor experienced what they’re saying was less-than-honorable resistance.

“Everybody was lied to – at every step of the process,” one pro-flag white GOP lawmaker told FITS.

Indeed.  It’s become increasingly clear to us that the honorable outcome of the flag coming down (which we called for in the immediate aftermath of the Charleston tragedy) was achieved via a perversion of process and a relentless deluge of deception (including eleventh hour lies allegedly told by the self-proclaimed star of the show, S.C. Rep. Jenny Horne).

And while we don’t have buyer’s remorse regarding the flag coming down (it should have never been raised in the first place), the process of getting it down has created unnecessary animosity and discord.

Obviously we’ll have much, much more to say on all of that, on all the intrigues and intricacies related to this ongoing drama … but the bottom line is this: Addressing the Palmetto State’s problems via pro-liberty, pro-free market solutions (as opposed to throwing more government at them) has likely become immeasurably harder in the last four weeks.

The flag has fallen, as it should have, but the “new South Carolina” everyone keeps talking about will never rise if our state’s good ol’ boy lawmakers (and good ol’ gal governor) continue conducting “business as usual.” Or if they continue living off the land as opposed to improving underlying soil conditions for all citizens.

More government has failed … in fact this approach has created an economic climate in which people like Dylann Roof are drifting in search of scapegoats rather than working for paychecks.

To fix that, our “new South Carolina” must – by definition – try new things.

Count on us to continue proposing such pro-liberty, pro-free market reforms, and holding accountable those leaders who refuse to embrace them.