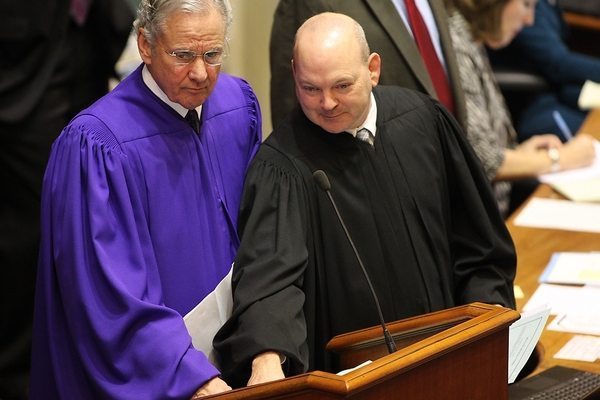 FLAG OPPONENTS: “THERE IS RESISTANCE IN THE SENATE”

|| By FITSNEWS || The South Carolina House of Representatives is expected to move quickly this week to amend an adjournment resolution so that lawmakers can immediately take up the latest controversy surrounding the Confederate flag.  According to our sources, the House has the two-thirds majority necessary to address the flag by amending the legislature’s “sine die” resolution – which went into effect when the S.C. General Assembly adjourned earlier this month.

(This is precisely the scenario we laid out – and encouraged – in this column).

But will the State Senate follow suit?  S.C. Senator Lee Bright has made it clear he opposes taking down the flag – referring to the effort to remove it as a “Stalinist purge.”  Meanwhile the Senate’s majority leader – Harvey Peeler – angrily left a meeting on Monday with S.C. governor Nikki Haley, who reversed her prior support for the flag and called for it to come down (news of which was reportedly exclusively here on FITS).

Peeler did not stand with Haley at her press conference Monday afternoon.

Nor did S.C. lieutenant governor Henry McMaster – who presides over the Senate and (despite calls for him to withdraw) remains a member of a prominent “whites only” country club in Columbia, S.C.

Sources tell FITS several other State Senators are opposed to the effort to remove the flag, whereas those organizing the effort to bring it down have acknowledged to FITS there is “resistance in the Senate.”

Pressure has been building to remove the controversial banner in response to last week’s horrific, racially motivated “Holy City Massacre” at the Mother Emanuel AME Church in downtown Charleston, S.C.  There, nine black parishioners – including S.C. Senator Clementa Pinckney, the church’s pastor – were gunned down by Dylann Storm Roof, a 21-year-old white supremacist.

The critical question to be answered in the Senate?  Whether any flag supporters will attempt to filibuster the amendment providing for the immediate consideration of the issue.  If such a filibuster were successful, it would mean the flag issue could not be addressed until next January.

Assuming one of the flag’s supporters does decide to filibuster – it would force his (or her) colleagues to sit them down.

And while sitting down a filibustering Senator requires the same two-thirds majority needed to pass the flag amendment, it’s a much harder sell.

How come?  Because Senators don’t want their colleagues voting to “sit them down” when it’s their turn to protest something – and voting to sit another Senator down sets that precedent.  In fact one Senator who spoke with FITS on condition of anonymity made it abundantly clear that any effort to end a flag filibuster would result in the end of filibusters by black Senators.

“If a white Senator gets sat down on the flag, there will never be another black filibuster in this chamber,” he said.

Hopefully no one will rise to filibuster the flag amendment.

South Carolina desperately needs to put this issue to bed once and for all, and the S.C. House – to its credit – has shown real leadership in putting together a coalition to do just that.  A Senate roadblock at this stage of the game would serve no purpose other than to needlessly prolong division and discord at a time when Palmetto State leaders need to unite behind what’s right.

UPDATE: “Republican” Senate leaders say they have the votes to address the flag issue.  Still unaddressed, though, is whether a single lawmaker might move to filibuster the process and – if so – will they vote to sit that lawmaker down.