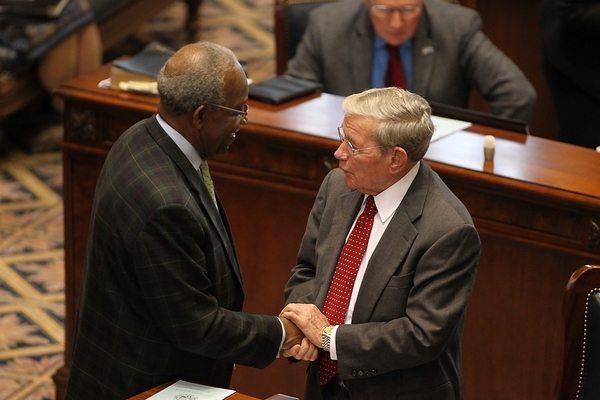 || By FITSNEWS ||  The South Carolina Senate has the two-thirds majority it needs to amend its recent adjournment resolution and take up the Confederate flag controversy, sources tell FITS.

The news comes on the heels of our earlier reporting that the S.C. House of Representatives also had the two-thirds majority it needed to amend the “sine die” resolution – which governs what issues can be discussed in an extended session of the legislature.

In other words, lawmakers are doing exactly what we urged them to do three days ago by way of responding to the horrific, racially motivated “Holy City Massacre,” the mass murder of nine black churchgoers at the Mother Emanuel AME Church in downtown Charleston, S.C.  There, nine black parishioners – including S.C. Senator Clementa Pinckney, the church’s pastor – were gunned down by Dylann Storm Roof, a 21-year-old white supremacist.

“Sine die will be amended and we will take up debate (on the flag) shortly after Clem is buried,” one S.C. Senator told FITS.  “Not all will vote for taking it down, but almost all will vote to amend sine die so (the issue) can be taken up.”

And what of S.C. Senator Lee Bright – a Confederate flag supporter who has reportedly been mulling a possible filibuster of the flag debate?

“He may rail – though he’s being strongly urged not to since that will prompt Democrats to respond,” the Senator told us.

UPDATE: Confirmed.  A press release from the S.C. Senate “Republican” Caucus states that GOP lawmakers “voted overwhelmingly today to take up the issue of moving the Confederate Battle Flag from the (State House) grounds.  In the very near future bills will be offered and the full Senate will debate and vote on this important matter.”