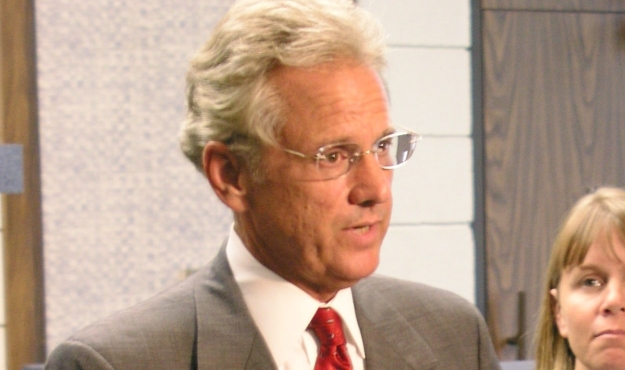 Specifically, Crawford said McMaster should have nothing to do with a club that wouldn’t permit one of South Carolina’s sitting U.S. Senators – Tim Scott – to be a member.

“If Henry McMaster wants the Republicans of South Carolina to take him seriously as our candidate for lieutenant governor, he’s got to make sure he’s not affiliating himself with organizations that would exclude his fellow statewide Republicans based on their ethnicity,” Crawford told Cope.

We agree … although McMaster, who has been a member of the club for more than three decades, has said he has no intention of quitting.  In fact his spokesman – a former Nikki Haley staffer – claims the club isn’t discriminatory because it has an interracial couple on its waiting list.

Last week, S.C. Rep. Beth Bernstein – a Columbia Democrat – said she and her husband would not be accepting an invitation to join the club due to its discriminatory policies.

Forest Lake’s “whites only” policy – part of the deed to the property upon which the club sits – made headlines again last week when S.C. Rep. Bakari Sellers (D-Bamberg) challenged McMaster to withdraw.  Sellers – a centrist Democrat – is running against McMaster for lieutenant governor.

As we’ve said from the beginning of this drama, we respect the right of private clubs to admit – or refuse admittance – to anyone they please, for whatever reason they please.  Of course they should also be prepared to face the consequences of their decisions in the marketplace of ideas – which (appropriately) rejects racism as incompatible with fundamental individual liberty.

Will Sellers quit his job, since Pete Strom – his liberal democrat boss man – is a member of this club, that allows anybody, regardless of race???

You idiot Democrats have NOTHING but your race myths.

If you think Pete Strom is a liberal democrat, then you are the idiot here. Let me guess, you’ve never met the guy. Obviously. You know what happens when you ass-u-me.

Never met him either, but trust me, if he’s an ambulance chaser and works with Sellers, he’s a Leftist Democrat, regardless of how many people he tries to convince otherwise at country fish fries and pig pickins.. end of story.

Strom is a damn chameleon – he’s for whomever is for him. He represents several R’s facing indictment (Goldfinch). He hosts fundraiser a for R’s and D’s (Finlay and Sellers). He supports who supports him. What’s most shocking is that Sellers didn’t realize his own boss was a member / what a buffoon

You should worry about your boy Bobby!

McMaster should not bow to this superficial political ploy. It would show he is too weak to lead. Hang in there Henry.

Interesting that Doug Brannon piled on though, isn’t it?

There ARE rules and policies which prevent Whites from being a member of the Black Legislative Caucus.

TIL there are white people who really want to be a part of a Black Caucus.

Goddamn that’s going to give me nightmares.

He’s a nasty piece of work.

He looks like a clown without its makeup on.

These double standards are getting old!

I got a better idea. How about Henry just quit the race? I meant the race for Lt Governor, but hey, as a (mostly) Caucasian, I wouldn’t mind if he disassociated himself from the rest of us.

Why do you keep citing a deed restriction that has no legal effect? Those covenants have been unenforceable since 1948.

Exactly, provisions of a property deed are not bylaws of the club itself. Until recently, I’d guess the ridiculous waiting period discouraged plenty of whites from joining too. This is a completely manufactured “scandal”.

That is not entirely accurate – see In Re Bacon Estate, a matter involving a deeded property with reverter clause if property ever used by people of color. court upheld reverter and gave property back to family that instituted the reverter. From my understanding, FLC lease has reverter in it if there is ever a black member of club. Forest Land Co. Would get property back, and be free to develop as they please.
Would be willing to bet that Forest Land would be happy to invoke reverter and have some very prime real estate in heart of Forest Acres, on a lake, to develop as they want.

Citation please? Because I’m not going to believe that this is correct until I read the decision.

Evans v. Abney 396 U.S. 435 (1970) – Supremes stated that while clause in deed was violative of 14th amendment (e.g., that people of color could not use property given to city of Macon GA for a public park), and that although the provision was unconstitutional and could not be enforced, the reverter could be, Since the city could not, by law, abide by the rules of the deed, the reverter kicked in and heirs able to take property back. The Court relied on Cy Pres, that Sen. Bacon, if he had known that his wishes to keep people of color off the land could not be enforced, then he would have never deeded the property to the city.

The lease on FLC was written many many years ago, and allegedly contains such a reverter clause. Per my understanding, the club leadership is WELL aware of this clause and the potential for the lease to be ended by admission of a black member. I doubt the family that owns the land would want the bad press that invoking the revrter would create, but that is an extremely valuable piece of dirt, and the family has many members.

I am not a member of FLC, nor have I ever been one. know lots of folks there, and most are decent people.

Yep. I actually found this after my earlier reply. I highly recommend Google Scholar for anyone who wants to do free computerized legal research. I’d love to know the actual terms of the FLC deed. If it is only a restrictive covenant with no reverter there is no issue.

i do not know the actual terms of lease, just know it has been discussed as an issue in the past at club leadership levels

There is a deed restriction in my neighborhood that no “colors” can own property in our area. Can we kick out all the blacks who bought a home there and live there??? I will hang up and listen Will.

Say he withdraws from the club. Okay. Now, is he not still the same person who was a member of the club? How has anything changed? Has his mindset changed? Has the club changed? What is different? The goal of Sellers is not to have old Henry leave the club. The goal is to point him out as being a racist. So, the GOP should just shut the fuck up and let Bacardi have his moment.

He’s a loud mouth that, if you’ve ever seen him milling around Williams Brice, likes to sport loud pants.

How much do you bet that Beth Bernstein’s membership invitation somehow triggered this tempest in a teapot? I am guessing that Sellers, or someone connected to him, heard she was joining and got jealous.

I think it’s probably the other way around. I’m guessing that BB and hubby were pursuing club membership and Sellers messed things up for them by making this a political issue.

All the libturds that are always saying how what they do in their bedroom, backyard, off time, private time, etc shouldn’t be brought up. then jump all over Henry for membership in a club are at best two faced and at worst just plain liar’s . Trying to impugn an otherwise good man is as low as one can get..Henry will make a great Lt. Gov. He is way over qualified for the job and when in 16 Gov. Haley gets a Washington job he will make a great governor. Sellers realizes he will be a bug on Henry’s windshield in Nov. Which is as it should be.

What makes you think President Clinton will give Nikki Haley a job?

Agree with you. It’s odd that the Sanfords and Ravanels of the world get a pass by many of these “Repubs” under the libertarian logic that their private lives have nothing to do with how they govern, while at the same time, the private lives of the McMasters of the world apparently do matter. So the age old sin of adultery is now apparently way more acceptable to this society than a group of white folks who simply want to play bingo, smoke cigars, and drink brandy with people that look and act like themselves in their spare time… seriously, that’s just crazy and in no way do I believe that my ancestors fought the British over that twisted logic.

Tell us is lyin’, Rouge. Once again, your ditto-head limited vocabulary is limited to rhetoric w/ no facts.

So has Bakari Sellers ever been a member of a black fraternity or the hundreds of other minority-only “Professional” associations?

Do not resign from FLCC. Consider the sources who are demanding that you do. They are the ones that are the problems. Keep your membership and be proud of it. You will make a fine Lt. Governor. Thses blowhards are a disgrace to any party.

He can quit as long as all blacks in the Legislature resigns from the NAACP or they make public their list of members and donations!

More tripe from a mouth-breathing mo. The NAACP would take your membership app. They ‘ll take cracker money today.

no minorities at Forest Lake. Minorities are welcome at Capital City Club. is his brother still fondling waiters at the Palmetto Club?

Clement Haynsworth lost his bid for the Supreme Court thru his membership in the Poinsett Club. In 1969.

Hell we need more whites only.

Forest Lake Country Club is an abomination!
I believe they still even ban Jews as members.
Their members are mostly racist, anti-Semitic ass holes.

You are the one who is racist, anti-Semitic ass hole.

REALLY, for pointing out the truth.
You are the type of fool that keeps clubs like Forest Lake in business.

You obviously don’t know what you’re talking about. Although the club’s membership is not a matter of public record, numerous news reports have stated the it has multiple Jewish members. And how many members do you know? How do you know that they are “racist, anti-Semitic ass holes”?

I have known about that club for decades and decades.
It was founded on the principles of exclusion, and any members that have been admitted that are not WASPS, are only there as tokens to keep the heat off their members.