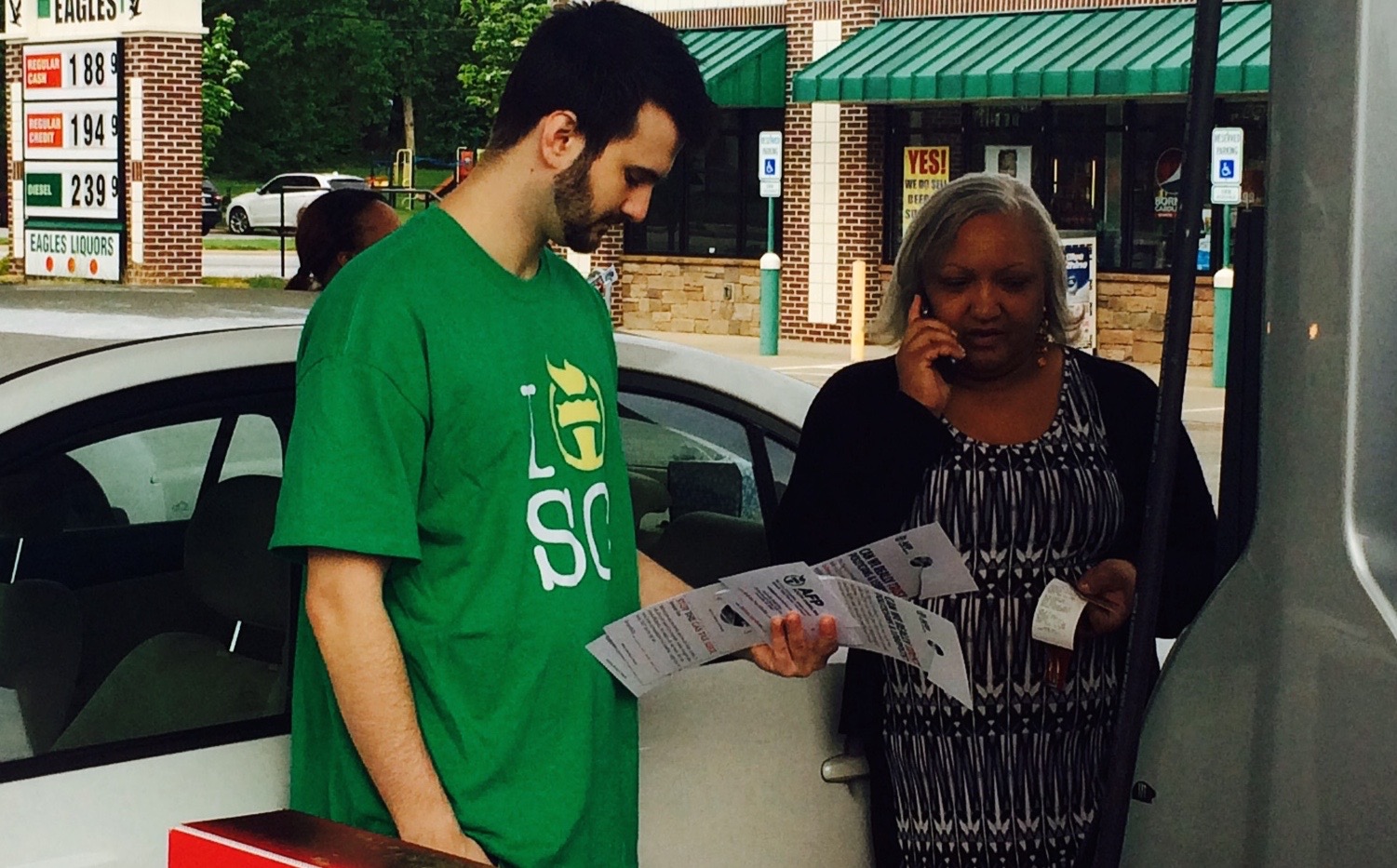 || By FITSNEWS || We dinged the group Americans for Prosperity (AFP) recently for taking its eye off the ball on the gasoline tax issue … criticism which apparently found its mark.  This week AFP is working it, though … holding an event at Eagles Gas Station in Greenville, S.C.

The purpose of the event?  To show South Carolina motorists just how much the existing gas tax – and several proposed “Republican” gas tax increases – will impact them at the pump.

According to a press release from the organization – which is supported by billionaire industrialists Charles G. Koch and David H. Koch – Greenville motorists were given a brief tax holiday when AFP covered their gas tax bill.  That’s right … AFP paid their gas tax bill … letting them see what percentage of their weekly fill-up goes to government.

“When people realized how much of their gas bills were going into government coffers, a lot of them were shocked,” AFP’s state director Dave Schwartz said. “These events really prove that when people understand what they already pay and the poor condition of some of our roads, they can’t believe lawmakers are asking for more.”

We can’t believe it either … especially seeing how dirt poor South Carolinians are already spending a disproportionate share of their incomes on fuel costs.  In fact according to the latest data, Palmetto State residents spend more of their meager incomes on fuel than residents of any other state save Mississippi and West Virginia.

Why?  Because state lawmakers have more than enough money to adequately maintain and reasonably expand our infrastructure system – they’re simply choosing to spend that money elsewhere.

About Those “Free Market” Liquor People …

LMAO!!! Reminds me of the petition campaign to put Tom Ervin on the ballot…pure insanity by the RINO’s and liberals!

fancy that, flip is back defending tax hikes and attacking those against having their money robbed from them by the thugs in the state house. go back to ohio you creep

Must be all the gas-hogging pick-up trucks.

AFP could impress me by paying for a mile or two of road construction as opposed to the measly gas tax liability of a few drivers in Greenville county.

You’re right Will. We just need to be patient with our diligent legislators while they clean our all the waste, fraud, and abuse in the budget. Get back to us when you think we’ve fixed the budget enough to get some decent roads. We’ll be patiently standing by –NOT. It’s time for solutions NOW. No more kicking cans down the road or whining about ideological purity BS.

Where did the funds go that were appropriated for road maintenance?

I think that is question we are all asking – where did the money go? Have you tried looking at their breakdown of expenditures?

I wish our roads, more specifically our bridges, were in better condition. Right in my neighborhood, I have to pass a “road closed” sign to get to my driveway. Apparently the last storm took out a bridge.

So where did the money go?

Reverend Ole was the pastor of the local Norwegian Lutheran Church and Pastor Sven was the minister of the Swedish Covenant Church across the road. One day they were seen pounding a sign into the ground that said: “DA END ISS NEAR! TURN YERSELF AROUND NOW BEFORE IT’S TOO LATE”

As a car sped past them, the driver leaned out his window and yelled, “Leave us alone, you religious nuts!”

From the curve they heard screeching tires and a big splash. Reverend Ole turns to Pastor Sven and asks, “Do ya tink maybe da sign should just say “BRIDGE OUT?”

LOLOL – thanks for the laugh!

Do have a nice day, and thanks for the perfect set-up!

You are one funny guy! Love your sense of humor. Hope you too have a nice day!

Don’t worry, just wear your seat belt and when your car plunges into the Broad River b/c a bridge failed you can sue the state for millions.

SC is reactive, as is the government in general. They get the money, but they seldom ever spend it as is intended. Just look at social security. You might need to use a wayback machine (http://archive.org/web/) to see the differences posted on their site, but they piggy backed the hell out of a program that was originally designed as a retirement/widow program.

Yeah, cause AFP cares so much about us regular folks.

“David Koch is the fourth richest person in America as of 2012,and the wealthiest resident of New York City as of 2013. He is the ninth-wealthiest person in the world, as of 2014”

Correction…they care so much about making sure us regular folks never get anywhere near as rich as they are…but like so much castor oil…it’s our medicine and good for us so they say….from the resort island they bought in the Bahamas.

When you think about the pure form of Libertarianism, which has injected itself into the Tea Party and GOP movement as of the last decade like so much collagen into Kim K’s lips, the constant drumbeat against taxation and gov’t oversight is the cause of S.C.’s woes today.

We are moving further towards Somalia or Yemen. The public’s distaste for the greater good and commonality combined with an absent common sense taxing structure means our roads crumble, our schools are shit, our environment is trashed, our unemployment is high and our standard of living is literally one of the worst in the developed world….but all in the name of ‘Murican freedom.

The old adage rings true…you get what you pay for…or don’t in this case.

BIG difference IMO between libertarian (with a lower case l) and your Tea Party and yes, your GOP. Hell, none of them can get along until the very last minute and then it is a push and pull maneuver, power plays. Once they get someone elected, they make every effort to control that person to do their bidding. I have decided I am an Independent – I saw all the ugly crap last election.

I think you are a funny guy at times, but I am an individual v. collectivist.

We get the choices of a bunch of recycled candidates, or families, to choose from – who make decisions on how we live our daily lives.

We are not cattle to be herded, prodded or robbed of our very existence.

Aye but there’s the rub…in reality we are cattle. Day by day we watch the demise of a once great nation…but ironically people keep electing the same reps that hold us back at every turn. It’s like South Carolinians are in a death spiral but enjoy it with a glass of iced tea and a smile.

I have no defense for that. I was so disgusted, I knew how it would turn out, I didn’t even vote Mid-Term. I did support a candidate, but it was hopeless.

‘Bout that dang tea – I don’t even know how that stuff qualifies as tea, maybe the few grains of tea sprinkled into all that sugar water? Hmmm….must be the color that makes people think it’s tea.

If AFP is against it, count me for it. AFP is so disconnected to reality its amazing. All talk and no realistic proposed solutions

I just love it when it rains around here, because it really increases my driving awareness. Instead of the boring drive down the road on smooth asphalt, i get to dodge the new potholes as they appear. Luckily, the fresh chunks on top help me spot them in advance so I can weave through the obstacle course called a road

Curtis Loftis used to be against this tax. Why is he no longer speaking out? Guess the politicos got to him. Regardless of principles he now keeps his mouth shut. Governor probably cornered him.

People found out about Curtis Loftis and his vile, sick, corrupted ways. And the entire State Senate voted against him. April 30, 2015. Yes, 44 voted against him. One, Paul Thurmond did not vote. Poor guy, too young to know better. The Senators of this fine State know Curtis Loftis for what he is… Stupid, corrupt,sick.. He must resign . The people of this state cannot trust him to be in charge of the many state programs under him. He has violated many … Where did the money go? To his friends? to his Saluda Charitable foundation? To his own pockets? The Inspector General, the governor, the ethic commission all must look at this vile man. Our tax money, my money is being violated.

There are many complaints filed against Curtis Loftis. The Bank of NY Mellon and the million of dollars lost to the State retirees’ trust fund. The 9 million dollars paid to the attorneys and millions to Curtis own intimate friend and more to come. Curtis Loftis has done so much harm to this State that he must resign. The Senators of the entire state spoke and Curtis Loftis does not have a single friend in the group. That is why FITS and Curtis Loftis are very quiet today. The love affair between FITS and Curt is Over.

Curtis Loftis is the State treasurer and has destroyed the STO. Staff is leaving a seeking ship and staff has left the seeking ship. Many will speak about Loftis violent temper, breaking , throwing things, erasing hard disks, cameras in offices and hallways, and .. his … life style. Many are scared of him and fear for their life. The vote on April 30 was 44 against Curt and one no vote. That is the reason Curt is now an eunuch… A bully without balls