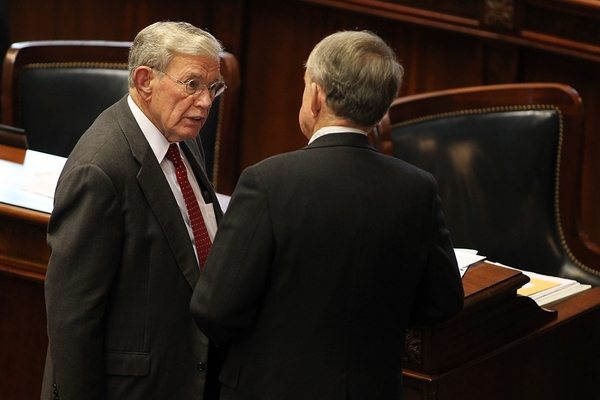 || By FITSNEWS || By an overwhelming margin, the “Republican-controlled” S.C. Senate Finance committee approved a massive gasoline tax on South Carolina motorists – shortly after rejecting an effort by S.C. Senator Tom Davis to attach an income tax relief provision to the bill.

All of those “Republicans” – including S.C. Senator Paul Campbell – also approved the gas tax hike, which would raise this levy by 71 percent over three years.  The bill would also double the cost of drivers’ license renewal (from $25 to $50) and double the sales tax cap on vehicle purchases (from $300 to $600).

Davis argued passionately for the income tax relief – arguing (correctly) that South Carolina’s strategy of bribing big companies to locate in the Palmetto State was not a successful method of “economic development.”

Specifically, Davis accused his “Republican” colleagues of falling victim to the “broken window fallacy,” a term popularized by French economist Frédéric Bastiat in the mid-nineteenth century.

“You can’t see the opportunities we are missing,” Davis said, referring to the punitive economic impact of the state’s seven percent top marginal income tax rate.

Unfortunately for Davis, he was advocating a position put forward by S.C. governor Nikki Haley – who has spent the last few months bashing lawmakers.  That’s a curious conversion seeing as Haley accommodated lawmakers’ big government ideology for the entirety of her first term in office.

Haley supports a gas tax hike – but only in exchange for the promise of future income tax reductions.

Shortly after the gas tax hike passed, though, S.C. Senator Kevin Bryant placed what’s known as a “minority report” on the legislation – meaning State Senators will have to work overtime if they want to get the bill placed on the Senate’s calendar (for more on that process, click HERE).

We oppose the gas tax hike … if for no other reason that dirt poor South Carolinians already pay a higher percentage of their income on fuel costs than residents of any other state (save Mississippi and West Virginia).

Yeah … they don’t tell people that when they poll the question, do they?  No … they do not.

As we’ve stated repeatedly, the “Republicans” who voted for this tax hike have approved billions of dollars in new spending on South Carolina’s worst-in-the-nation government-run school system, its duplicative and inefficient higher education system, bailouts for wealthy corporations, shady ‘economic development‘ deals and … lest we forget … dozens of exorbitantly expensive and totally unnecessary highway projects.