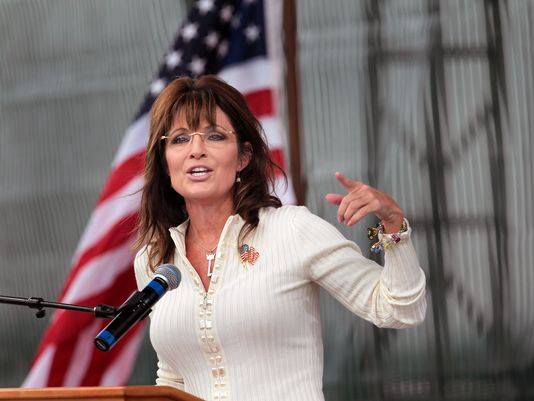 || By FITSNEWS || Moments after expressing her serious interest in a campaign for the presidency (of the United States, not the Alaska Tea Party), former GOP vice presidential nominee Sarah Palin delivered an address to the Iowa Freedom Summit.

Palin was dishing out the red meat in heaping handfuls to the early-voting faithful in Iowa – discussing her views on energy issues and “this subjective income gap that we’re supposed to be obsessed with right now.”

“No … we get on offense and we drive in solutions – and we be bold,” Palin said.

“Things must change for this cover … for our government,” Palin continued.  “Look at it.  It isn’t too big to fail.  It’s too big to succeed!  It’s too big to succeed, so we can afford no retreads … or nothing will change with the same people and same policies that got us … into this, this status quo.  Another Latin word, status quo, and it stands for, ‘Man, the middle-class everyday Americans are really gettin’ taken for a ride.’”

“That’s status quo, and GOP leaders, by the way … y’know the man can only ride ya when your back is bent,” Palin added.  “So strengthen it.  Then the man can’t ride ya, America won’t be taken for a ride, because so much is at stake and we can’t afford politicians playing games like nothing more is at stake than, oh, maybe just the next standing of theirs in the next election.”

Look, we agree.  GOP retreads and their status quo policies are absolutely screwing over the middle class (hence our focus on that “subjective income gap,” among other fundamental injustices in the system).  So Palin is absolutely correct to rail on the politicians perpetuating these failed policies.

But come on, girlfriend … at least sound like you’ve got a clue.

“Palin had a chance (several chances, actually) to emerge as a substantive figure on the national political scene … and didn’t.” we wrote last summer.

Earlier this week we added that we didn’t “see the 50-year-old’s prospective 2016 presidential bid as doing anything to change that perceived lack of gravitas,” which appears to be especially true when her Teleprompter malfunctions.